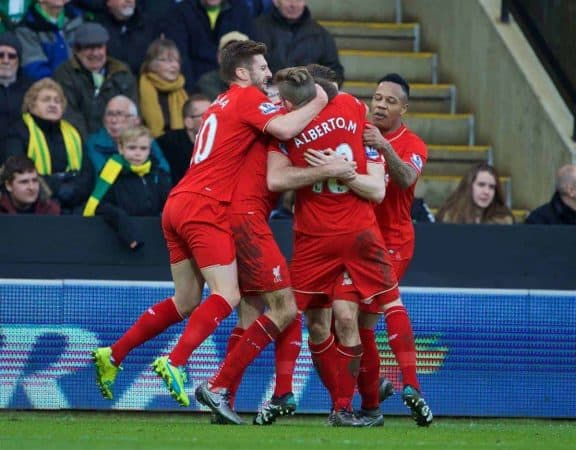 A last-minute strike from Adam Lallana sealed a 4-5 win for Liverpool over Norwich City, in a breathtaking 90 minutes of football.

Taking to Carrow Road on a crisp Saturday afternoon, Liverpool looked to continue their strong run of form with a win against Norwich.

Inspired by the majestic Luis Suarez, Brendan Rodgers’ Reds routinely thrashed the Canaries in East Anglia, but with a change in management and the loss of the Uruguayan, the landscape of the fixture is much-changed.

Jurgen Klopp will have been desperate to continue Liverpool’s dominance over Norwich, and the German made just one change to the side that lost 1-0 to Manchester United on Sunday.

With Jordon Ibe coming in for Lallana in a 4-3-3 formation, Klopp’s lineup promised high-tempo attacking football, and after a poor start, Liverpool delivered.

With Norwich dominating in the opening stages, Liverpool’s only creative outlet was the pacy Ibe, and it was the No. 33 who played a big hand in his side’s first decisive move, stretching Norwich‘s back line to allow Roberto Firmino an opening.

Latching onto an intelligent, disguised pass from James Milner, Firmino clipped an effort beyond Declan Rudd which trickled into the Norwich goal to put Liverpool 1-0 up.

Some similarly suspect defending at the other end allowed the Canaries to claw back within minutes, with Dieumerci Mbokani backheeling past Simon Mignolet to level the score.

Mbokani continued to trouble the Liverpool defence throughout the first half, providing Norwich with a strong, physical pivot in the penalty area.

It was Naismith who fashioned Norwich‘s second however, with the January signing firing a powerful, low shot into the bottom corner.

Canaries manager Alex Neil will have been quietly confident heading into the second half, with Klopp’s Reds all at sea in defence and offering little in attack.

With Klopp no doubt looking for his side to make an immediate impact after the interval, having made no changes at the break, the 48-year-old was visibly frustrated after two poor challenges from Alberto Moreno gifted Norwich a penalty.

Stepping up against Mignolet, Wes Hoolahan dispatched the spot-kick with consummate ease, but it wasn’t long before Liverpool had reduced the deficit.

With the ball landing at his feet, Jordan Henderson found himself completely open in the Norwich penalty area, firing a first-time volley past Rudd after a bright counter-attack.

Looking to his bench to change the game, Klopp brought Lallana on in place of Ibe, with the winger’s influence having diminished after the break, and this proved pivotal, with Lallana laying on a superb first-time pass for Firmino’s second and Liverpool’s third.

With close to half an hour left on the clock, Liverpool smelt blood at Carrow Road, and fiercely pushed for a winner, inspired by the excellent Firmino.

Their confidence crumbling, Norwich presented Milner with the simplest of goals, with a dismal backpass from Russell Martin allowing the No. 7 to round Rudd and pass the ball into the back of the net.

But his wasn’t the last twist in the tale, as Lallana had to final say, drilling a loose ball into the ground and beyond Rudd.

The scoreline belied the worrying lack of overall quality from both sides, but Klopp will be overjoyed to take three points away from Carrow Road in what was a testing afternoon for his side.