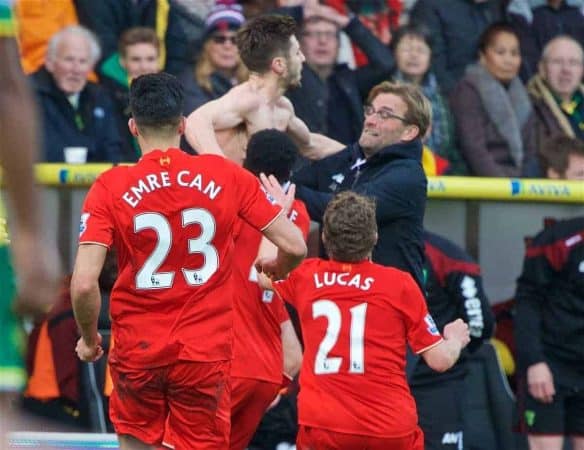 Lucas delighted with Norwich win, but knows improvements are needed

Lucas Leiva was understandably pleased with Liverpool’s thrilling 5-4 win over Norwich City on Saturday, but feels the Reds must eradicate their current deficiencies.

It was an unforgettable win for Jurgen Klopp and his side at Carrow Road, as Adam Lallana snatched victory with almost the final kick of the game.

The post-match celebrations were arguably the most memorable since 2013/14, and the entire match epitomised the ups and downs of being a Liverpool supporter.

Lucas felt the Reds showed great heart in grabbing the win, but accepts there are still many improvement to be made on the pitch.

“Of course, we are happy to get the result, especially the way it was at half-time,” Lucas told liverpoolfc.com.

“The manager just said we had to find a way to win. We did it. Of course, it’s not the best way to win a game but maybe it was what we needed.

“We need to improve a lot but the passion, determination and belief is there. Hopefully, we’ll improve in things we’re not doing so well now and then move on.

“If we can score five goals and defend set-pieces especially a little bit better, we would be winning games more comfortably. It’s better to win the game but we know we have to improve.

“But it will give us a lot of belief. On Tuesday we have a very big game, a semi-final and a chance to go to Wembley. We will do everything we can to get there.”

Lucas also spoke briefly about Tuesday’s vital League Cup semi-final second-leg against Stoke City at Anfield, and says Liverpool will be ready for the visit of Mark Hughes’ side.

“It’s one of the biggest games of the season until now and a good chance for us to go to Wembley,” he added.

“We don’t need any more motivation. We will recover and for sure everyone will be 100 per cent, mentally and physically, for Tuesday.”