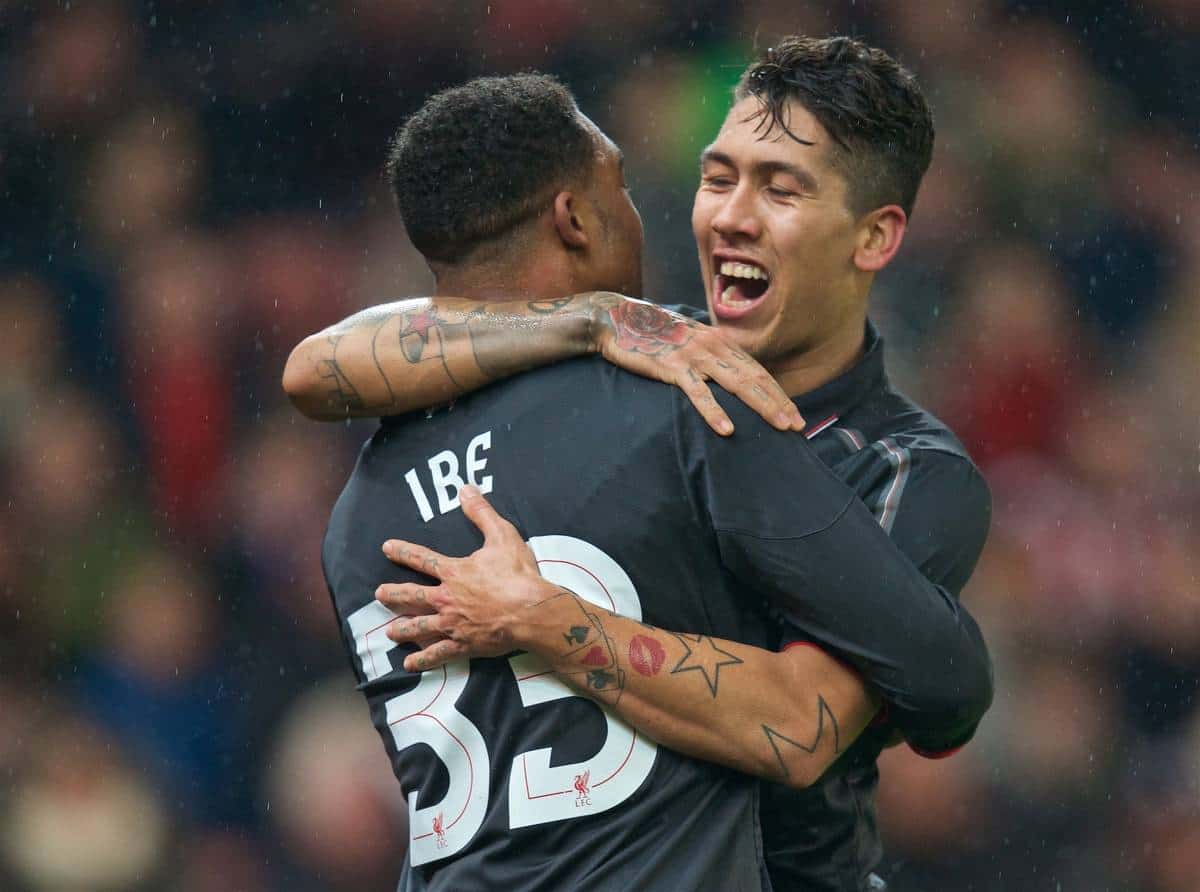 Liverpool head to the second leg of their League Cup semi-final against Stoke City with a 1-0 lead, thanks to a Jordon Ibe strike at the Britannia Stadium.

Under Mark Hughes, Stoke have undergone a sensational upturn in changes, with a change in values—from the agricultural to the technical—earning plaudits from all corners this season.

Able to gain a crucial advantage heading into the second leg at Anfield, Klopp will have been desperate for his side to gain victory.

Making just three changes to the side that lost 2-0 to West Ham United in the Premier League last time out, Klopp signalled his intentions from the offset, and this paid off for the Reds. Roberto Firmino, operating in the No. 9 role, tested Jack Butland from range before a bold interception from Alberto Moreno kept up the pressure in the opening minutes, with Stoke pinned into their half by black shirts.

It took 10 minutes for the Potters to gain control of possession, with Bojan, Xherdan Shaqiri and Glen Johnson all combining to great effect in the Liverpool half.

But Liverpool remained in control, with an exceptional pass from Joe Allen, in great form on the right-hand side of Liverpool’s midfield three, setting Philippe Coutinho free in the final third, with the Brazilian only stopped by a solid Ryan Shawcross challenge.

Coutinho soon limped off however, grimacing and holding his hamstring, with Klopp bringing on Ibe to take his place, while Dejan Lovren soon followed, making way for James Milner on 34 minutes.

Not letting withdrawals hamper their momentum, Liverpool got themselves 1-0 up through a well-worked Ibe strike on 38 minutes, with Lallana’s pullback evadeing the Stoke defence via Allen to allow the 19-year-old the perfect opportunity to drive the ball beyond Butland.

As Anthony Taylor blew for half-time, Klopp will have breathed a sigh of relief; his side 1-0 up, despite significant injury issues.

Hughes took the initiative at half-time, introducing the bullish Jonathan Walters and taking off Geoff Cameron, giving Stoke a physical point of reference in attack.

The Reds kept momentum in the early stages after the interval however, with Kolo Toure strong in defence, Allen and Milner bright in midfield and Firmino making some intelligent runs leading the line, roared on by their manager.

Shaqiri almost benefited from a defence-splitting pass from Marko Arnautovic just before the hour mark, however, but Simon Mignolet was quick off his line to gather.

At the other end, Allen had strong calls for a penalty ignored by Taylor, with the Welshman bundled over by Glenn Whelan in the Stoke box, and Nathaniel Clyne searched for another minutes later after a shoulder barge from Arnautovic.

Taking Bojan off and bringing Joselu on, Hughes confirmed his intention to exploit Liverpool’s weak defensive line, taking a long-ball approach in the buildup.

Not resting on his laurels either, Klopp rolled the dice and brought on his big-money No. 9, Christian Benteke, with the Belgian taking Allen’s place on 79 minutes.

Morphing into a battle of the rangy centre-forwards, Liverpool were resolute in defence, despite Toure’s own hamstring troubles in stoppage time, and as You’ll Never Walk Alone rang out at the Britannia, the Reds kept things simple, holding on for a comfortable lead.