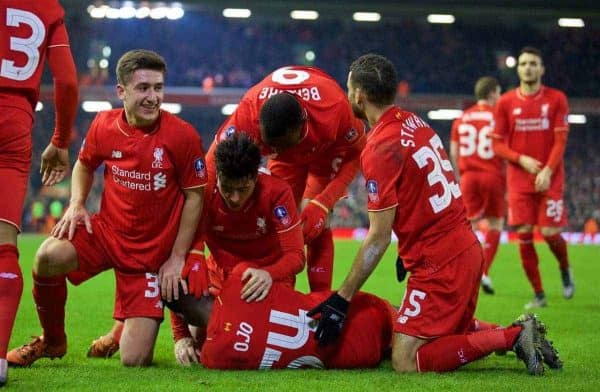 Jurgen Klopp’s youthful Liverpool side overcame Exeter at the second attempt in the FA Cup replay at Anfield on a night that saw numerous positives.

Goals from Joe Allen, Sheyi Ojo and Joao Carlos Teixeira sealed Liverpool’s place in the fourth round of the FA Cup against the battling Grecians.

The Reds dominated – as expected – from start to finish under the lights at Anfield, proving too strong for Paul Tisdale’s League Two side, enjoying a rare but welcome routine and comfortable victory.

Klopp’s Reds now face West Ham in the next round at Anfield in 10 days’ time, and here are the talking points from Wednesday night’s important win.

Youngsters rise to the occasion as progression is sealed

Klopp stuck to his word after the first tie 2-2 draw and handed the youngsters a second chance to seal progression at Anfield.

The Reds boss was repaid for his faith with another promising night of performances from those selected, watching on as Brad Smith impressed again, Cameron Brannagan bossed midfield, Ojo delight with a tie-clinching impact and Teixeira become the fourth player across the two games to notch his first for Liverpool.

With Tiago Ilori again composed in defence and doing his bit to keep the fourth division side at bay, the young Reds secured progress producing a mature performance and taking another positive step in Liverpool’s pursuit for silverware as the cup competitions take on an added importance.

It’s extra satisfying to advance considering the youthful sides selected over the two-legs, with the youngsters standing up to the challenge in Devon before finishing the job with maturity and composure on a pressure-filled night at Anfield

The Belgian once against led the attack against the League Two outfit, but once again failed to impress.

Despite playing a key part in Allen’s opener – exchanging passes with Smith – and brilliantly assisting Teixeira’s strike after a powerful run and pass, those proved Benteke’s only positive moments, with the £32million striker again at odds with teammates throughout and especially poor in the box.

Moving out of danger areas when he should have been arriving or holding his position to get on the end of a set-up, the ex-Aston Villa man bizarrely took himself out of goal-scoring positions, and while he tried to be more involved in open play, it was down to the easiness to do so rather than him proving too good for Exeter.

The Belgian spurned a couple of chances – two one-on-ones and heading over when he really should have found the net – and he was more useful in the Liverpool box, where he helped defend corners more convincingly making two impressive clearing headers.

Benteke should be dominating in games like this, but once again he disappointed doing nothing to convince Klopp he deserves a place in the full-strength side.

Klopp’s decision to introduce four experienced heads paid dividends with the Reds dominating from start to finish in a controlled performance.

A young Reds XI were flustered at times at St James Park 12 days ago, and bringing in Simon Mignolet, Allen, Jordon Ibe and Benteke at Anfield – only the Belgian started in Devon – was a sensible move from Klopp with their influence key with each of the outfielders involved in a goal.

Allen’s class was evident with the Welshman influential with his goal and distribution, while Ibe kept the Reds on the front foot driving at the City backline, teeing up Ojo for the second, before Benteke provided for Teixeira after a powerful run and good pass picked out the Portuguese.

It was a good move to supplement youth with experience from Klopp, and the rewards were forthcoming with his side booking their place in round four.

On a night of many positives, a vital one came as Liverpool banished the curse of the third round replay.

All eyes were on another potential Anfield cup-shock, with the Reds having suffered cup exits at the hands of lower league opposition in each of their last three third-round replays with Bolton, Bristol City and Reading, but the jinx finally came to a welcome end against Tisdale’s side.

At a time when league form is suffering and the cups provide a welcome distraction, it was essential the Reds didn’t add to a miserable campaign by allowing Exeter to continue the curse and exiting in embarrassing fashion under the added pressure.

Liverpool had never lost to a fourth-tier side in 14 games in the FA Cup, a welcome run they extended at the same time they ended an unwanted one.

Arguably even better than the result and the fact the Reds notched three and kept a clean sheet was the comeback of Jon Flanagan.

It was the local lad’s first appearance since playing for England prior to the 2014 World Cup, and he was met with the roar his return deserved from the Anfield crowd, who voiced their pleasure at having the popular Scouser back involved in the first team set-up after injury.

It’s another step on the long road to full recovery for Flanagan, who will provide Klopp with a welcome defensive option and full-back cover in the hopefully not-too-distant future, and he capped off his first game back with a tidy and wholehearted display as he blew-off the cobwebs after 18 months out.

Patience will be required as the Scouse Cafu finds his feet and fitness again, but it’s certainly fantastic to have him back.