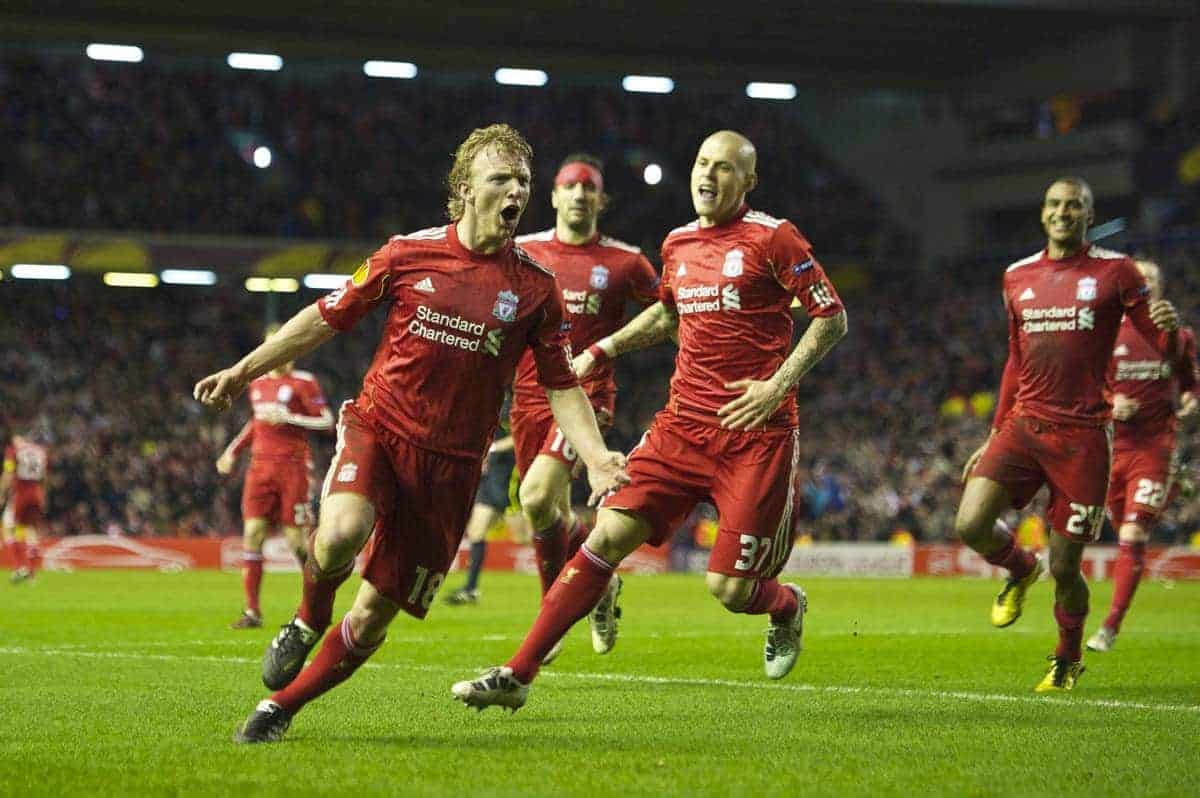 Ahead of Augsburg’s visit to Anfield for the crunch second leg on Thursday night, we take a look at back at Liverpool’s previous victories at the last-32 stage of the Europa League. Ahead of the first of two season-defining games, optimism can be drawn from the Reds’ 100 percent winning record in last-32 ties at Anfield; with four wins from four Merseyside contests at this stage since the competition changed format in 2009/10.

Klopp will be desperate for his team to continue Liverpool’s dominance of home encounters and make it five wins from five round-of-32 matches, as the Reds search for a place in the last 16 – with their eyes on European glory.

Here’s how the knockout victories of yesteryear played out. Elimination from the Champions League placed Liverpool in the round of 32 for the first time in the reformed competition.

The Reds welcomed Unirea to Anfield, with Rafael Benitez paying the Romanian outfit utmost respect by selecting an almost full-strength side as Liverpool looked to seal a first-leg lead to take to Eastern Europe.

Despite the strong lineup, a frustrating night against the stubborn visitors looked set to end in a disappointing goalless draw, as Benitez’s men struggled to break down Unirea’s resolute back-line.

But a late Kop End header nine minutes from time from David N’Gog, after Dani Pacheco’s knock-down, ensured the Reds had the advantage wanted for the return in Romania, where Liverpool completed the job with a 3-1 win, sealing progress. After progressing through the group stage under Roy Hodgson, Kenny Dalglish was back in charge by the time the Reds faced the Czech outfit at the knockout stage a year later.

Having played out a goalless first leg in Prague, Liverpool returned to Merseyside for a tense second tie, looking to make home advantage count.

But again it proved a night of overriding frustration in front of the expectant Anfield crowd against a resilient Sparta side, before a second headed late winner in as many seasons sealed a vital European victory.

The all-important moment came from the ultimate big-game player in Dirk Kuyt, who rose highest to meet Raul Meireles’ corner to fire the Reds into the last 16 – and hand Dalglish his first European win as Liverpool boss.

Looking to overturn a two-goal deficit from a poor first tie in Russia, Brendan Rodgers’ Reds had it all to do at Anfield where they came within a whisker of a recording another famous European night.

Roared on by an atmospheric Kop, Hulk’s cool finish 19 minutes in – after the Brazilian latched on to Jamie Carragher’s short back-pass – appeared to have ended the contest, with Liverpool now needing four goals to advance.

But Luis Suarez’s powerful free-kick nine minutes later kicked off a spirited fight-back and provided feint hope, which Joe Allen further added to as he hit home a second two minutes before half-time.

With Anfield in full voice, sensing something special could happen, a stunning second free-kick of the night from Suarez with a half-hour remaining made the impossible seem possible again, setting up a grand-slam finish with the Reds 3-1 up.

But despite a courageous effort which saw chances come and go in the final 30 minutes, the key fourth goal eluded Rodgers’ men who bowed out with their heads held high.

Dropping out of the Champions League into Europe’s secondary competition, Liverpool faced Turkish side Besiktas at this stage last year.

With a tough trip to Turkey to come against Slaven Bilic’s side at the historic Ataturk Stadium a week later, Rodgers’ men searched for a vital first-leg advantage to take to the hostile second encounter.

Despite enjoying the better of the game and the chances against the lively visitors at Anfield, it seemed Liverpool would have it all to do in Istanbul, until – in typical fashion – the Reds snatched a late winner five minutes from time.

A foul on Jordon Ibe saw referee Szymon Marciniak award a late penalty, leading to an argument between Jordan Henderson and Mario Balotelli over who was taking the spot-kick, with Daniel Sturridge also involved.

Eventually, the Italian coolly slotted home in front of the Kop to hand Liverpool the initiative, ahead of a hard-fought second leg in which Rodgers’ side went on to lose on penalties.