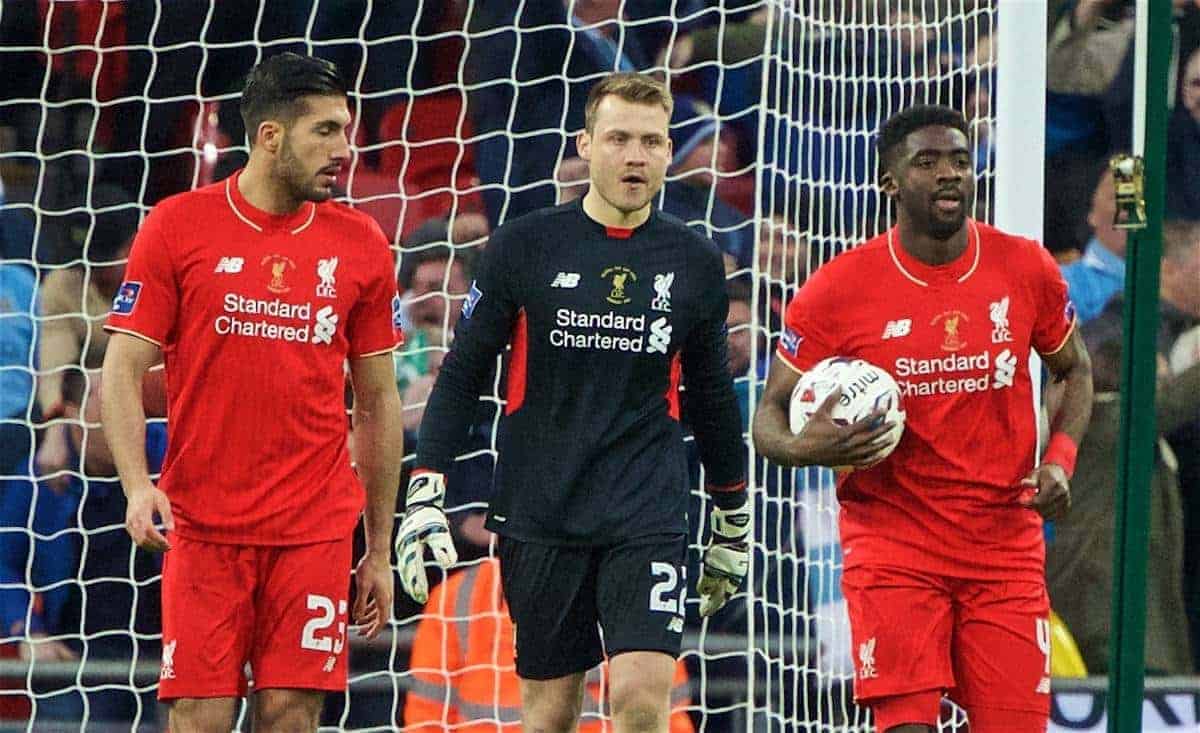 Liverpool goalkeeper Simon Mignolet will spend some time analysing his performance in the Capital One Cup final – but insists the Reds have to move on quickly from the disappointment. The Belgium international was arguably at fault for Manchester City‘s goal at Wembley, allowing Fernandinho’s shot from a narrow angle to pass under his body.

He could not then replicate counterpart Willy Caballero’s heroics – the Argentine saved three spot-kicks in the penalty shoot-out.

Bizarrely, when Mignolet watches the match analysis back, he will also be able to recognise some positives as he did make two or three excellent saves, including two from City’s dangerman Sergio Aguero to keep his team in the game.

But he will not spend time dwelling on either the good or the bad as Liverpool must soon face Manuel Pellegrini’s side again, at Anfield on Wednesday, giving them an instant chance to respond.

“It’s too early to say about that,” he said when asked about his role in Fernandinho’s goal.

“I’ve not seen it back again but I’ll analyse it the way I’ve always done.

“When you come out of a final and you’ve lost you’re too disappointed to talk about it.

“We’ll try to think about it Monday and we will make a better analysis.

“We have to pick ourselves up as soon as possible because we have another game on Wednesday.

“We have to do it together. We have to go again but like when you lose a final that is all you think about. That’s normal.

“It’s not easy after (losing) a final but we have to perform, make sure we keep going in the Premier League and in the Europa League.”

The Europa League takes on increased significance now, with a last-16 tie against arch-rivals Manchester United coming up in the next couple of weeks.

Forward Adam Lallana, one of the players to miss in the shoot-out, believes that now has to be their motivation.

“A few words were said after the game, not many, but the few words were that we have got to push on now in the Europa League,” he told Liverpool’s official website.

“We have got a great fixture against Manchester United to look forward to which is massive, the fans will love that, we love that and we have just got to pick ourselves up and go again.

“To come so close to winning a trophy and going out on penalties is always tough to take. “We won a couple of penalty shoot-outs on the run to this final and you can’t win them all.

“We felt we were in the game throughout normal time and in extra time, and going to penalties obviously it can go either way.

“It’s just disappointing, the emotion that is in the dressing room, to come so close to winning a first bit of silverware for the season under the new manager.

“Everyone gave everything and we worked so hard to try and win.”