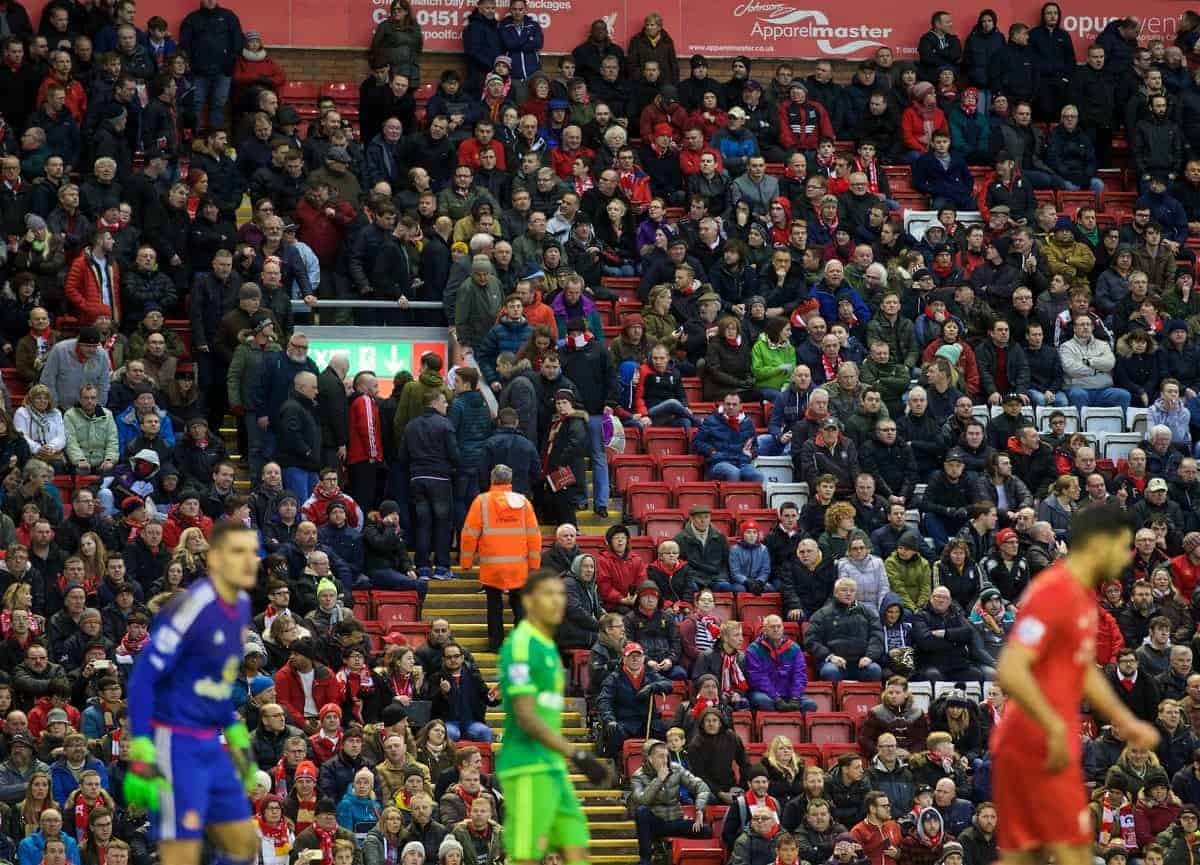 A Liverpool fans’ group has warned of further demonstrations in the matches against Manchester City and Chelsea following Saturday’s mass Anfield walkout over ticket prices, saying the walk-out against Sunderland was just “the start”.

Several thousand fans left their seats in the 77th minute of Liverpool’s Barclays Premier League clash against Sunderland in protest against the club’s new pricing structure, which includes a B£77 matchday ticket.

Liverpool were leading 2-0 ahead of the walk-out before late goals from Adam Johnson and Jermain Defoe secured a draw for the Black Cats.

Reds midfielder Jordan Henderson told the BBC’s Match of the Day programme that he and his team-mates could not use the protest as an excuse for letting the lead slip, and a spokesperson for Spirit of Shankly – the fans’ group which helped to co-ordinate the demonstration – has no regret over its actions and vowed to stage further protests.

“We are happy with yesterday’s demonstration and we are pleased with the number of supporters who took part,” Jay McKenna told Press Association Sport.

“The moment which preceded the walk-out also showed the strength of feeling, with the very loud, audible chants aimed at the directors’ box.

“But the protest was aimed just as much at the owners because the decision of the prices is one made by Fenway Sports Group and the ownership of the club.

“It is a good indication that supporters are very angry at prices and this will just be the start of taking more action.”

Earlier this week it was announced that a Liverpool match ticket in the newly-reconstructed Main Stand will cost £77 – up from £59 – as well as the first £1,000 season ticket.

And with high-profile matches against City and Chelsea to come in March, further demonstrations are being planned.

“We have got Manchester City and Chelsea at Anfield so those two league matches – where prices are still going to be on the forefront of people’s minds – will be opportunities where we will discuss what action we take next,” McKenna added.

“For us, it is unequivocal: this is the start. A walkout of Anfield it is unprecedented – it has never happened before – and I can’t think of an occasion where it has happened in such numbers in another league ground in the UK.

“We don’t have a firm idea of what we will do yet as this has all happened very quickly, so we will take the next two days to take stock and talk to the supporters about what we do next.

“But we will be taking action because we need to. Yesterday wasn’t about letting off steam, and saying we are a bit angry but we will carry on. We really need Liverpool Football Club, the owners, and the executives to think to themselves ‘is this the right approach?'”

On Friday Reds chief executive Ian Ayre urged those considering walking out to go back and look at the whole ticket package the club was offering.

“I respect everyone’s right to do what they think is right but for every fan thinking about that I would say ‘Have a look at the facts’,” he added.

“You might be walking out for something you are not quite understanding. ‘If people want to leave after 77 minutes that is disappointing but it shouldn’t be because they feel the prices are wrong as there is something for everyone in there.

“If someone who sits in a certain position where there is a £77 ticket next season but can’t afford it, we have another option for them.

“No-one is being priced out of the stadium. There is a seat for everyone at the right price.”

OPINION: Enough is enough, and it’s not just about Liverpool – View from the Kop of Anfield protest