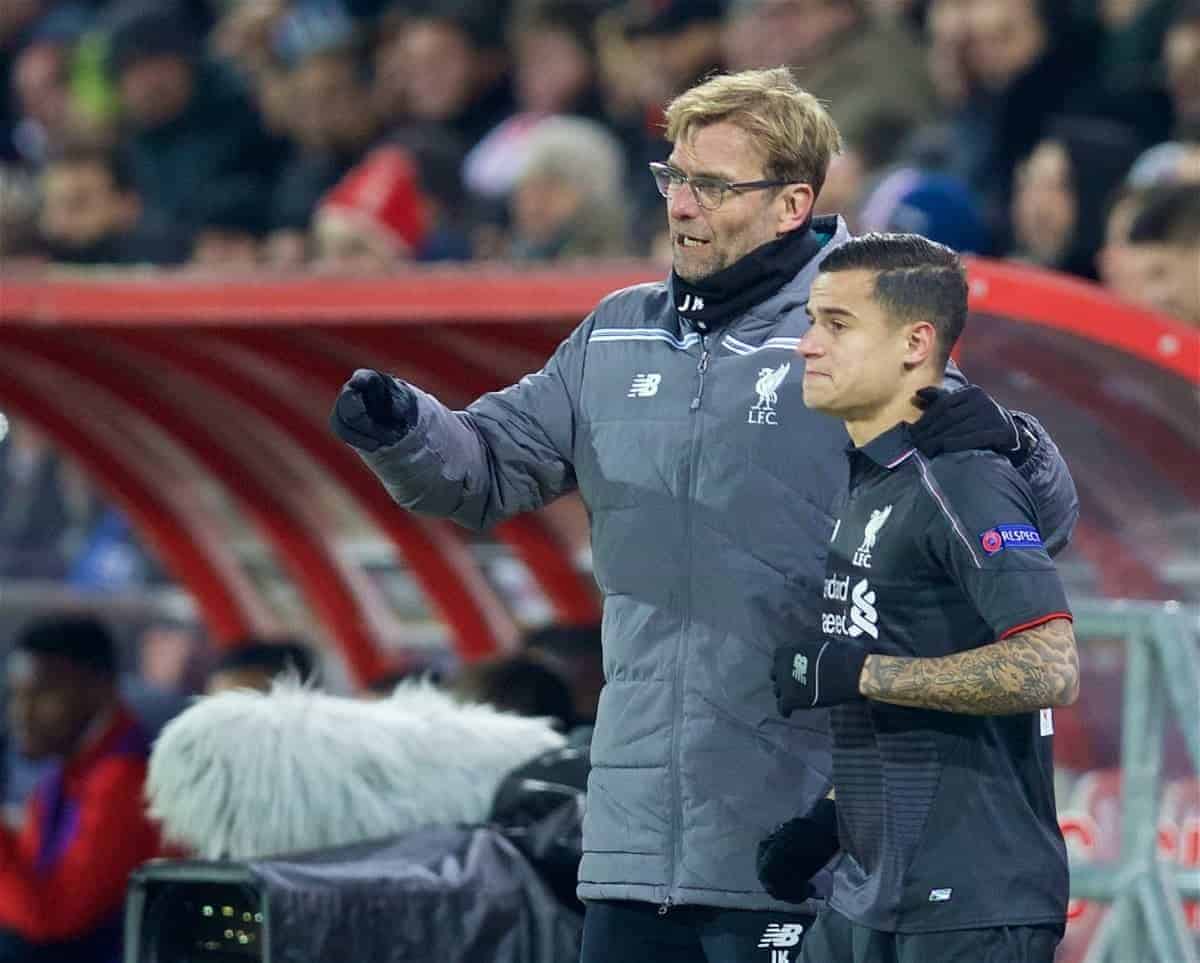 Continuing to grow in his key role at Liverpool, Philippe Coutinho has praised the influence of Jurgen Klopp, and the German’s expressive brand of football.

Coutinho has returned from injury this month, and restored to his role as Liverpool’s chief playmaker, produced a stunning creative display in the Reds’ 6-0 win away to Aston Villa.

That stands as one of the Brazilian’s best performances in a Liverpool shirt, and Coutinho has lauded the arrival of Klopp, saying his influence is making him “an even better player.”

“He created a highly successful side at Dortmund and it is great for Liverpool to have him,” the No. 10 said last week.

“In training, we are working hard and enjoying his methods, which are helping to make us better players.

“Little by little, it is translating to matches and I think everyone has seen how effective his philosophy can be if we adapt it in the right way.

“It feels like we are moving in the right direction under him and we believe we can fight for the big prizes and enjoy some special moments with the fans.”

Coutinho will be looking to play a key role in victory over Manchester City in Sunday’s League Cup final, with supporters hoping for a repeat of November’s 4-1 win over the Citizens at the Etihad Stadium.

That marks another of Coutinho’s milestone displays, with his intensity and tenacity off the ball complementing his quality in possession—with his all-round game improving under Klopp.

“Our team is playing a high-pressing game and I am enjoying it,” he continued.

“With this style there is more freedom when we have the ball.

“We still have responsibilities within the team, but the manager is asking us to play our game more naturally and it is enabling us to express ourselves.

“Klopp has put his ideas forward and they are helping to make me an even better player.”

Another player who has improved considerably following the arrival of Klopp is Coutinho’s compatriot, Roberto Firmino, with a goalscoring outing against City in November signalling his rise to prominence on Merseyside.

Coutinho believes his partnership with Firmino in attack can continue to develop, and produce more positive moments for Liverpool.

“Our understanding is improving and I am learning more and more about the way he likes to play, as well as his movement off the ball,” he explained.

“Hopefully that can be beneficial to both Liverpool and Brazil.

“He’s a great player who brings a lot of quality into the squad, but it is not just about two players and a partnership.

“The whole squad is working to improve as our main objective is to win trophies as a unit.”

Liverpool will need a top-level display from Coutinho and Firmino at Wembley on Sunday, but as the midfielder notes, Klopp will demand a strong team performance from his side.

As Coutinho continues to blossom under Klopp, he can help provide Liverpool with a much-need flourish in attack, but he is right to acknowledge that, under the charismatic German, the team is the star.