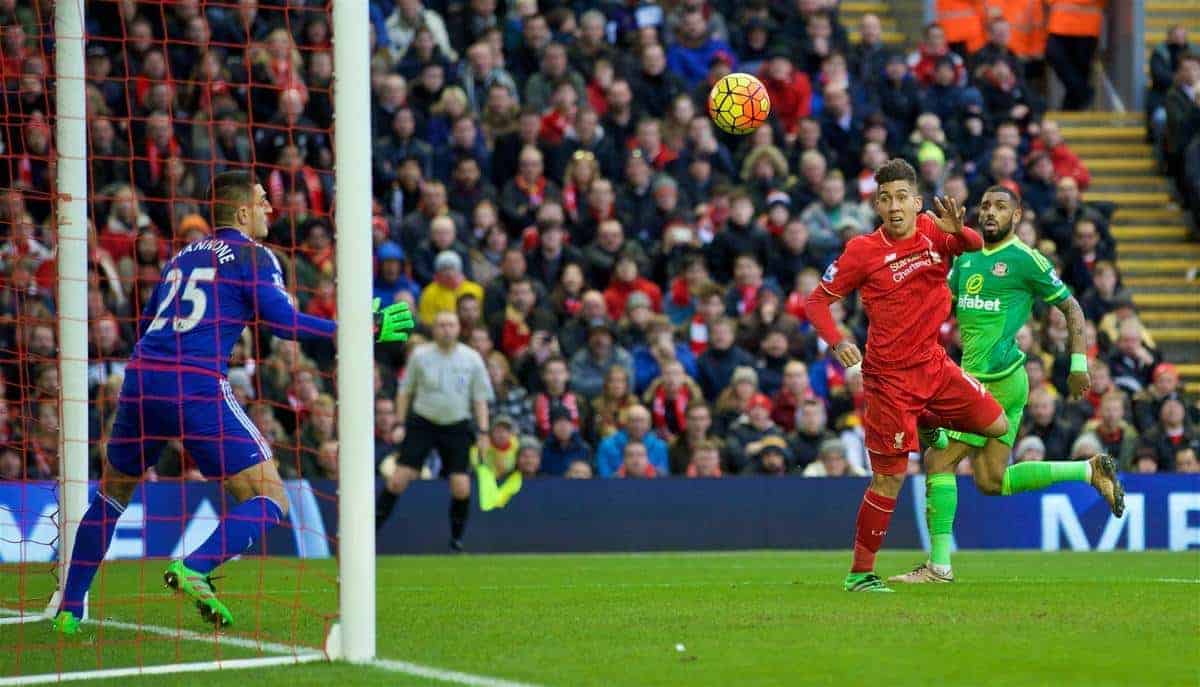 Following Liverpool’s 2-2 draw at home to Sunderland on Saturday afternoon, we bring you the best social media reaction from both during and after the game.

Quite how the Reds didn’t win that is a mystery, but once again it was the hapless Simon Mignolet who helped gift Sunderland a point.

Jermain Defore scored with a couple of minutes remaining, as Jurgen Klopp‘s side once again paid the price for a lack of ruthlessness.

It was a match that will be remembered as much for what happened in the stands as on the pitch, following the much-discussed walk-out after 77 minutes.

There were black flags out in force at Anfield, in reaction to the news of Liverpool’s extortionate ticket prices next season:

Black flags on the Kop pic.twitter.com/vbuYLqVuYC

'£nough is £nough' reads the banner in the Centenary Stand. pic.twitter.com/65IcYVUMYP

It was a drab goalless first-half on Merseyside, and supporters bemoaned both the Reds’ continued injury woes and the performance:

Not enough variety in this Liverpool lineup. Joe Allen offers more than Lucas Leiva, but Henderson, Milner and Lallana are all too similar.

Can't remember our attack being so ineffective, at least Ibe is now on; might be able to cause some problems with his direct running #LFC

I hate injuries. Today our manager isn't available and two of our players have got injured in the first half.

How anyone can ignore the injury crisis at the club is beyond me. Three players come back to train and another two go back on injury list.

Firmino and Lallana both scored to seemingly seal victory in the second-half, with the Brazilian running the show:

Firmino is just class. He will be really immense next season when he's had a year of Premier League football under his belt! #LFC

Brilliant from Firmino. Closed down Jones, won the ball back, raced clear and then unselfishly squared for Lallana to slot home. #LFC

Outstanding from Firmino (I'm stealing that word back) to set Lallana up, 2-0 #LFC

The rumoured walk out came to fruition after 77 minutes:

Thousands are walking out.

Respect to those Liverpool supporters leaving their seats at 77 minutes. #WalkOutOn77

Fans were left fuming after the game, particularly with Mignolet, after yet another capitulation:

If anything, conceding two goals following the walk-out writes a fantastic story. #LFC gutless. Sleepless nights to come for the hierarchy.

What's the difference between an appendix and Simon Mignolet?

There's still a chance an appendix might have a useful function.

This has to be the worst Liverpool squad since the Souness era. Even under Hodgson we still had Gerrard, Carra, Torres, Reina, Kuyt, Maxi

Sunderland with two shots on target against #LFC and two goals.

Well that was a bottle job and a half. Only positive is Firmino scoring 1 and creating 1.

Another awful day for #LFC. Things have got to change soon, and for me that's got to start with Mignolet being dropped. Sakho poor again.

Thanks for that, Simon. Enjoy the most undeserved new contract in football history!

Battling Liverpool snatch a draw from the jaws of victory.

Not good enough. Totally pathetic first half, followed by an 8min capitulation at the end of the game.

Serious question: is there a worse goalkeeper starting regularly in the Premier League than Simon Mignolet?

Team has been soft as shite for years now wouldn't scare anyone if you had to dog it..toothless and gutless even if there are injuries

I can understand the walkout!scousers know how to throw a proper protest.Just horrible when it coincides with a horrible result.ynwa