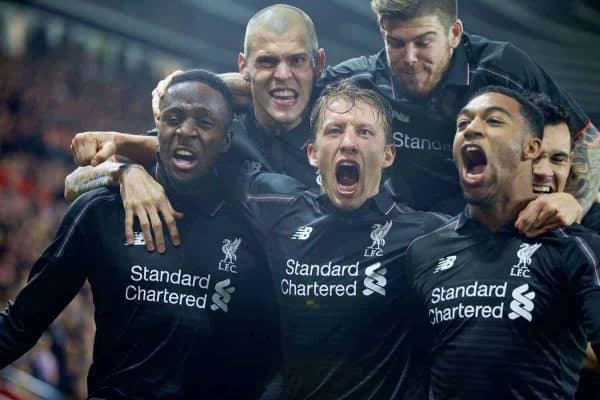 Liverpool vs. Manchester City: Routes to the League Cup Final

Liverpool and Manchester City go head to head this weekend looking to emerge from the Wembley duel as League Cup winner. Here, Press Association Sport takes a look at how both sides made it through to the London showdown.

Brendan Rodgers’ troubled start to the season continued as they scraped through on penalties against League Two opposition.

After Danny Ings‘ second goal in as many games was cancelled out by Derek Asamoah, the match eventually went to spot-kicks where debutant Adam Bogdan was their hero with three saves.

Kevin de Bruyne and Raheem Sterling tore the Black Cats apart, demonstrating a brutal efficiency in front of a largely horrified crowd of 21,644.

Sergio Aguero started the ball rolling from the penalty spot, before De Bruyne, Vito Mannone’s own goal and Sterling made it 4-0 by the break.

Ola Toivonen’s late header was scant consolation for the hosts.

Jurgen Klopp‘s first victory as Liverpool manager was secured via the unlikeliest of sources.

Nathaniel Clyne, playing in an unfamiliar left-back position, netted his first goal for the club he joined in the summer to book a quarter-final place.

Wilfried Bony and Kelechi Iheanacho were among the goalscorers as City coasted to victory without the injured Aguero.

The former started the rout, with Iheanacho getting in on the act after Kevin De Bruyne netted.

Yaya Toure added a fourth from the penalty spot and substitute Manu Garcia rounded off a good night’s work with a fifth in stoppage time after a Damien Delaney consolation.

With a hat-trick from Divock Origi – his first goals for the club – and a further finish from substitute Jordon Ibe, Klopp’s team stylishly secured their place in the competition’s final four.

An early goal from Bony should have been the platform for a comfortable win, but it was not until a strike from teenage substitute Iheanacho and a De Bruyne brace in the last 10 minutes that the match was wrapped up.

The win came at a cost, though, as the Reds lost Philippe Coutinho and Dejan Lovren to hamstring injuries inside 35 minutes, while their only fit centre-back, Kolo Toure, gingerly limped off at full-time holding the back of his thigh.

Ramiro Funes Mori had given the hosts the lead on the stroke of half-time, before substitute Jesus Navas’ first goal since September 2014 levelled things up with 14 minutes to go.

However, they were only level for two minutes as Lukaku netted.

Joe Allen was the penalty shoot-out hero as his spot-kick sent Liverpool to Wembley after a tense second leg.

City controversially came from behind on the night to overturn a first-leg deficit and reach the League Cup final.

Ross Barkley’s early goal put Everton in sight of a Wembley date with rivals Liverpool, only for City to reply through Fernandinho.

Controversy then erupted as Sterling then appeared to take the ball out of play before teeing up substitute De Bruyne to level the tie, with Aguero completing City’s fightback.

The major downside for the hosts was the loss of the influential De Bruyne through injury.