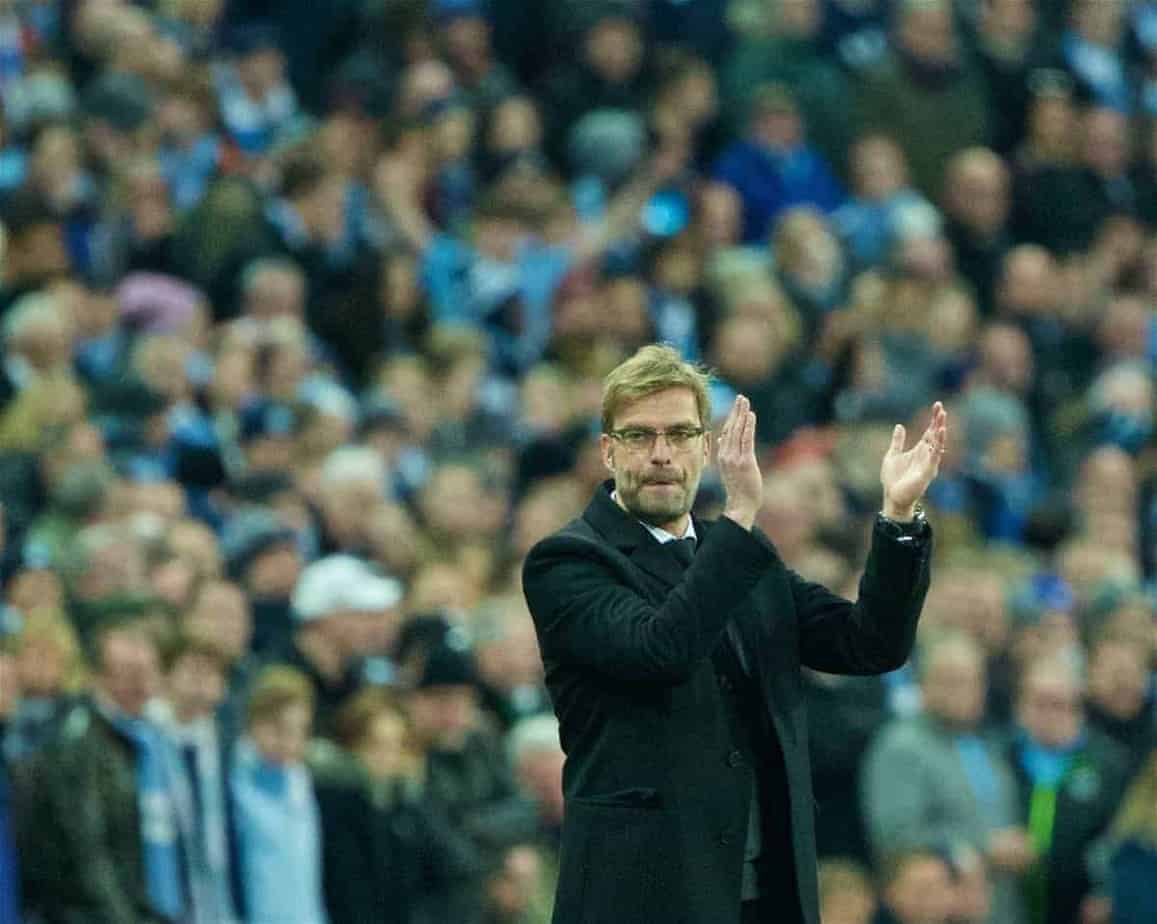 Liverpool were defeated by Man City in the League Cup Final at Wembley on Sunday, following misses from Lucas Leiva, Philippe Coutinho and Adam Lallana. Liverpool’s biggest game of the 2015/16 season finally arrived, following much anticipation, as City stood between Jurgen Klopp‘s side and a first trophy for four years.

The Reds were unchanged from Thursday’s 1-0 Europa League win over FC Augsburg, with Lucas once again starting at centre-back. Liverpool made a promising start to the match, using the ball well and not looking daunted by the magnitude of the occasion.

Fernandinho’s wild long-range volley was the first attempt on goal of any note, in what was a fairly low-key opening 20 minutes.

Simon Mignolet made a good stop to deny Sergio Aguero when a goal looked a certainty, following a slip by Mamadou Sakho.

The Frenchman had been involved in a nasty clash of heads with Emre Can shortly before, and he was replaced by Kolo Toure because of concussion. It was all too much for Sakho, who was clearly distraught at having to leave the pitch.

Firmino fired over the bar from distance and a Coutinho shot just evaded Toure at the back post, but it continued to be a game of few chances.

Half-time arrived with the score still deadlocked at 0-0. No team made a change at the interval. There was always a feeling that either a second-half mistake or a moment of magic would be the difference between Liverpool and City.

An angled Aguero half-volley flashed harmlessly wide of the goal, but shortly after the Reds were behind in desperate fashion.

Fernandinho drilled a shot straight through Mignolet, and it was yet another terrible moment for the under-fire Liverpool goalkeeper.

James Milner burst through but shot wide when he should have done much better, as Klopp’s men desperately tried to find an equaliser.

Former Liverpool man Raheem Sterling missed a glorious opportunity to double City’s lead, skewing an effort wide with the goal at his mercy. David Silva’s curling free-kick flew narrowly over the bar 20 minutes into the second-half, and Aguero forced Mignolet into a save low down to his right.

Lallana replaced Alberto Moreno in the 71st minute, as Klopp looked for some fresh inspiration from the bench.

Sterling had another chance to seal the glory for his side, but his wayward shot meant that Liverpool were still alive for the final 10 minutes.

With seven minutes remaining, the Reds were level. Coutinho pounced from close-range after Lallana somehow missed the post, and the Brazilian celebrated in front of the joyous Liverpool supporters.

It was a memorable moment inside a buoyant Wembley stadium.

Mignolet thwarted both Fernando and Yaya Toure late in the day, when it looked as though both midfielders would win the League Cup for City, as the game finished in breathless fashion. Mignolet made a wonderful stop to deny Aguero just before half-time, as the Belgian redeemed himself after his earlier error.

Origi’s header was kept out by Willy Caballero three minutes after the restart, while Milner’s misjudged header was almost pounced upon by Aguero.

It was penalties that would decide the victor, in what had been an enthralling contest.

City won the shootout, sadly, as Caballero kept out efforts from Lucas, Coutinho and Lallana. It was a thrilling but ultimately heartbreaking afternoon.