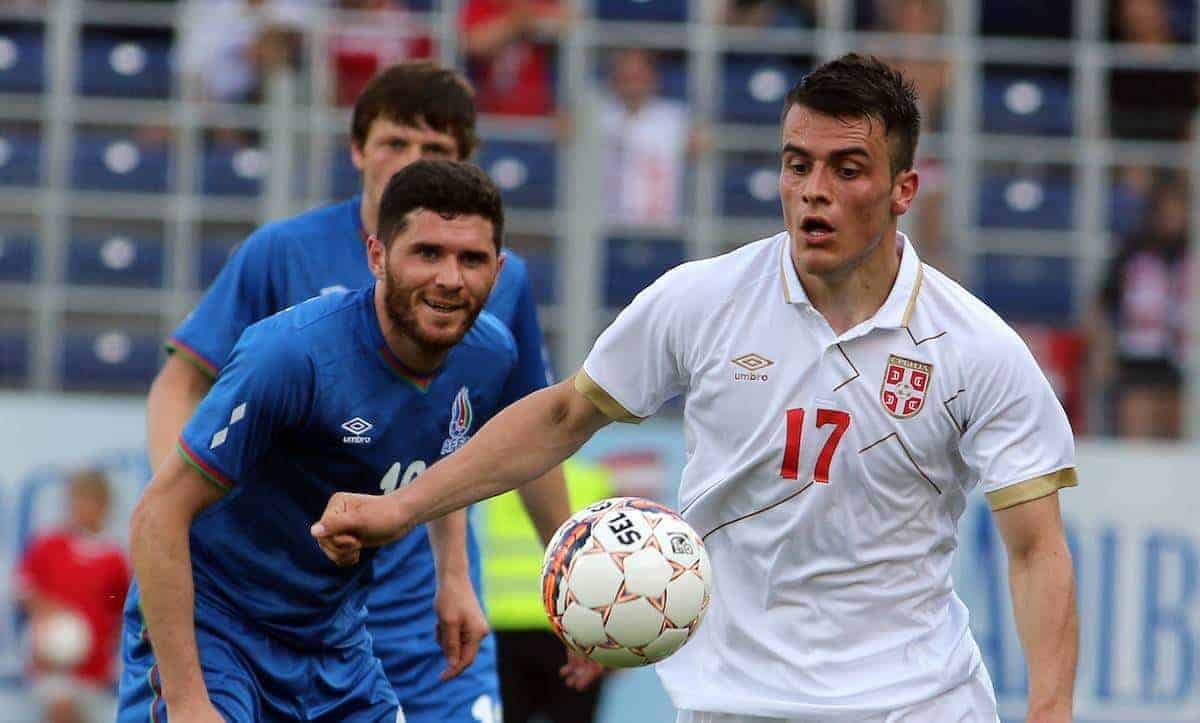 Filip Kostic is the latest attacking talent to be linked with a summer move to Liverpool, and the Stuttgart man would be a fine addition for the Reds. Kostic is said to be at the top of Jurgen Klopp‘s list of attacking targets this summer, joining Kevin Volland on the Reds’ radar as the German looks to bolster his wide ranks.

The Serbia international is valued at around £24 million, and would be a high-profile signing if Liverpool were to make the move ahead of 2016/17.

Enjoying a blossoming reputation in the Bundesliga, Klopp will be familiar with Kostic’s talents, increasing the possibility of a move to Merseyside.

But who is Kostic, and what could he offer Klopp’s Liverpool?

Born in Kragujevac, Serbia’s fourth-largest city, Kostic joined local club Radnicki 1923 as a youngster, progressing through the youth ranks steadily as they earned promotion to the Serbian SuperLiga.

Making a strong impression in the Radnicki academy, he was included in the first-team squad for the 2010/11 campaign, and made his debut as a 17-year-old in August 2010, coming on as a half-time substitute in a 1-0 win at home to Novi Sad.

After a transitional period, Kostic quickly established himself as a key player at Radnicki, making 30 league appearances in his first season in the senior squad, including 21 starts.

Three goals and nine assists in 27 games in 2011/12 earned a move to FC Gronigen in the Eredivisie, joining a squad that included future Premier League fixtures Virgil van Dijk and Leandro Bacuna.

“We had been observing Filip Kostic intensively for quite some time,” Gronigen sporting director Fredi Bobic explained on Kostic’s arrival.

“He is a young, technically capable player with an eye for goal and the potential to develop further. With him in the squad, we have a more varied attack.”

Competing with the likes of Andraz Kirm and Mitchell Schet for a starting role, however, Kostic endured a slow start, battling a language barrier and the expectation of filling the void left by the departed Dusan Tadic, with suggestions that the 19-year-old was struggling with problems with fitness and motivation.

But a change in manager saw an upturn in fortunes for the winger, as Erwin van de Looi employed him as a key player, rewarded with an impressive campaign in 2013/14, with Kostic scoring nine goals and registering eight assists in 34 Eredivisie games.

Kostic made the switched to Stuttgart after this breakout campaign, in a deal worth up to £5.5 million, and is now one of the most important players at the Mercedes-Benz Arena, starting all but four Bundesliga games this season, missed due to injury, with five goals and six assists in 23 appearances so far.

As Klopp took in Kostic’s progress at Stuttgart in 2014/15, he will have witnessed the winger’s similarities with another Bundesliga stalwart: Bayern Munich’s Arjen Robben.

Kostic is a dynamic wide option with great dribbling ability, and offers Stuttgart a valuable threat on goal.

Blessed with pace and quick feet, Kostic thrives when driving at opposing full-backs, picking the ball up from deep to spearhead Stuttgart’s forays into the attacking third; his skill on the ball allows him to negotiate tight angles and find space on the move.

Though able to operate on either flank, Kostic has largely operated on the left wing for Stuttgart manager Jurgen Kramny, and is also a strong creative talent, with a great, left-footed delivery.

The Serbian has made the most accurate crosses of any player over the past two seasons in the Bundesliga, with 112—something that would appeal to Klopp, who is currently lacking quality in his wide ranks.

Complementing this flair and creativity is a determined defensive contribution, built upon from his days at Gronigen, with the most duels of any player in his final season in Eredivisie, with 546.

This is aided by an earnest character, as then-Gronigen manager Armin Veh noted on signing Kostic in 2014, saying the winger made a “very good personal impression” ahead of his move; a key quality in a young player.

In terms of weaknesses, Kostic can be guilty of a wastefulness in possession, completing just 63.1 percent of his attempted passes this season, though this is very much a byproduct of his status as a risk-taker.

In short, Kostic is a confident, athletic winger standing at 6′, with potential to develop into an accomplished Premier League talent—but should this be at Liverpool?

Where Would Kostic Fit in at Liverpool? That Kostic has been mooted as a target for the Reds this summer should come as no surprise, with Klopp identifying the flanks as a problem area ahead of his rebuilding work for the 2016/17 campaign.

As a left-footed winger, Kostic would be best suited to a role on Liverpool’s left flank, though Klopp may be tempted to convert him into a Robben-esque right winger.

This would see Philippe Coutinho and Roberto Firmino keep their roles on the left and centre respectively, in support of Liverpool’s lone striker in a 4-2-3-1.

Kostic would certainly suit Klopp’s attacking system on Merseyside, with his defensive work key to his adjustment to the German’s high-intensity, pressing style, and pairing this with real quality in attack, he would provide an upgrade on regular wide option James Milner.

Any move for Kostic comes with a number of crucial caveats, however: namely, work permit issues, and his sizeable, £24 million transfer fee.

Joining Liverpool could be another step up for Kostic in a career that has seen consistent improvement so far, and at 23, the Reds could be acquiring a potential Premier League star. But with Kostic reportedly joined by Hoffenheim man Volland on Klopp’s list of attacking targets this summer, he may not be the best option.

Volland, available for £14 million, would be a more suitable signing for the Reds, as a left-footed right winger able to operate in a number of roles including as a No. 9, and his relationship with former Hoffenheim team-mate Firmino could be key.

If a move for Volland fails to materialise, however, supporters should be safe in the knowledge that Kostic is a more than capable alternative.