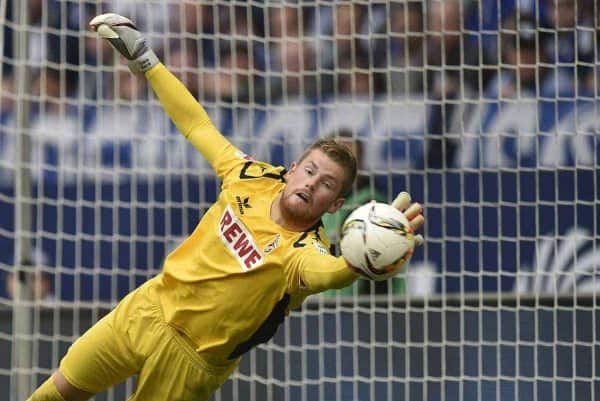 Matthias Hamann, serving as a scout for Liverpool in Europe, was in attendance as Timo Horn and Jonas Hector turned out for Cologne on Saturday.

Cologne fell to a disappointing 3-1 defeat at home to Schalke, but Hamann, brother of ex-Reds midfielder Didi, will no doubt have been impressed with what he saw in Horn and Hector.

According to German publication Bild, Hamann watched the pair throughout Saturday’s clash.

Horn and Hector are said to be at the top of Jurgen Klopp‘s list of targets this summer, as he looks to strengthen his defence.

With both goalkeeper and left-back representing problem positions for Klopp throughout his first months on Merseyside, it seems likely that the 48-year-old will reinforce those areas.

Horn is believed to be available for around £7 million, while Hector is valued at £6 million, providing Klopp with a pair of bargain signings this summer.

A confident, commanding presence between the sticks, Horn is a swiftly developing talent, who already boasts four seasons of first-team experience at the age of 22.

The Cologne academy product recently claimed that if the likes of Real Madrid, Arsenal or Man United moved to seal his signature, he would consider leaving the club, opening the possibility of a move to Liverpool.

Horn would represent an immediate upgrade on Simon Mignolet, with considerable scope for improvement over the years.

Standing at 6’0″, Hector is a strong, defensively sound left-back who prefers to focus on shackling opposition wingers, tucking in alongside the centre-backs.

This would provide Liverpool with stability on the left flank, though Hector is far from a conservative option.

In 2015/16 so far, the 10-cap Germany international has registered three assists, the same number as the attack-minded Moreno in 12 fewer games.

Bild claim that while Hector remains committed to the cause at Cologne, the financial benefits of a move to the Premier League could persuade him to depart the RheinEnergieStadion this summer.

Hamann’s presence at the stadium on Saturday will no doubt have followed with a glowing reference to Klopp, who will already be familiar with the pair during his time in the Bundesliga.

But Jorg Schmadtke, sporting director at Cologne, has admitted that Hamann’s visit “does not make me nervous,” revealing that “there are no inquiries, offers or the like.”

With both Horn and Hector great prospective additions to the Liverpool squad, this could soon change.