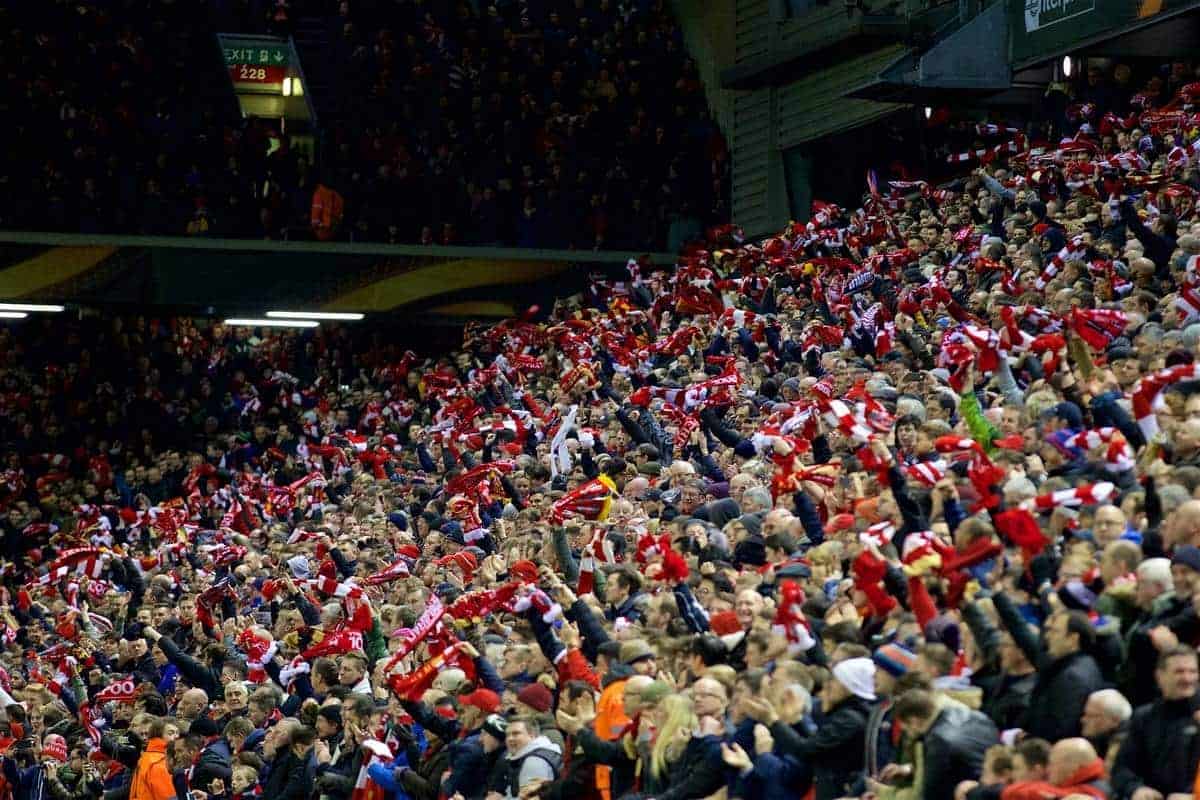 Liverpool romped to a comfortable 2-0 first-leg win away to Europa League last-16 opponents on Thursday night, in front of a defiant Anfield crowd.

Goals from Daniel Sturridge and Roberto Firmino either side of the interval capped a dominant all-round display from the Reds at Anfield, setting up a tantalising second leg in Manchester next week.

The heroics of David De Gea kept United in the contest, with the Spaniard making a number of vital saves to deny the likes of Sturridge and Adam Lallana.

But with Anfield in full voice in this first European meeting between the two clubs, Liverpool will be delighted to have secured such a controlling lead.

Here’s how supporters saw Liverpool’s 2-0 win at home to United.

Most focussed on the Reds’ dominance over their bitter rivals, with United lacking any structure throughout…

Proper European job executed by Klopp and the team tonight. Two goals and a clean sheet to take to Old Trafford.

Brilliant night for #LFC – on a different level to a poor United side. You can't see us not scoring at Old Trafford. Job half done!

Liverpool will get where they want to be under Klopp, or close to it. It's very hard to see Man Utd doing that under LVG.

Hell of a performance, utterly bossed that game. Not singling anyone out, whole team did their job.

Could've won by more, but ultimately that was a cracking display. Really controlled and efficient.

“Deserved win – bossed them from the kickoff to the final whistle, and if it wasn’t for the fact that they have one of the best keepers on the planet (or our finishing was better) it should have been four.”
– ubermick on the forums.

Liverpool were so much better tonight. Deserved a 3rd or 4th

Superb LFC display at Anfield tonight to comfortably and deservedly go into that second leg with a 2 goal advantage.

That was brilliant. We dominated from start to finish and kept the all important clean sheet. Away goal would be huge next week.

“Dominant performance. Should have been 4 or 5. They are blessed to have such a good keeper. Otherwise United were an embarrassment on and off the pitch.”
– Herb on the forums.

Good result and good performance, particularly by defensive players who were practically perfect.

I'd have liked one more.. That was a great performance on the whole. Henderson needs a rest until next season..

Would've been 4 or 5 if it wasn't for a world class keeper. Really good performance. Bringing Allen on was a great move by Klopp.

Klopp is gradually transforming Liverpool into an energetic, coherent unit, in a way that Van Gaal has failed to do with Manchester United.

People talk about the performances away vs Chelsea & Southampton, but the game tonight and vs City last week, are true signs of a Klopp team

“Fantastic win. We made it look easy. Well done our lads. Klopptastic performance.
– theres always tommorrow on the forums.

Won 2-0, yet we could've won by a bigger margin. Speaks volumes about what Jürgen Klopp has done for #LFC and its fans.

Klopp's vision is all over this Liverpool team. When we do fail it is in the execution, not in his idea. Van Gaal's United tho is visionless

Jurgen Klopp is turning Liverpool into a side that plays digital football. Meanwhile, Louis van Gaal is still trying to tweek the aerial.

Once Klopp gets a couple of lads in who can execute his style of play properly #LFC will be flying. Absolutely flying

Firmino and Nathaniel Clyne were singled out for their strong performances…

My love for Firmino grows by the game

We had Hoffenheim right off btw. £21 million *upfront* for Firmino?

Brilliant night at Anfield. Incredible atmosphere matched by the team's performance on the pitch, it could easily have been 5! #LFC

THAT's what you call a European night.

Superb result for the boys tonight

Speechless. Show them the way to go home…

So many great #LFC performances tonight. Firmino was brilliant as were Can, Clyne & Coutinho. Allen fantastic off the bench too.