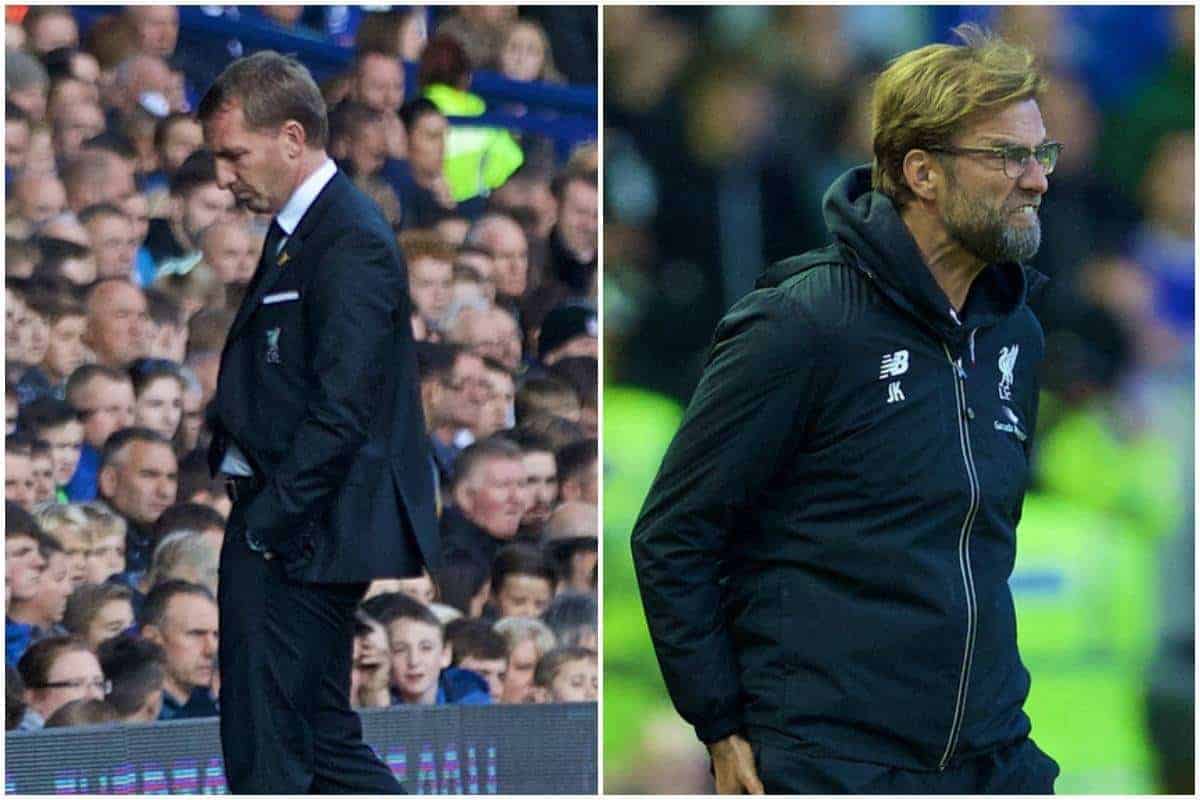 Jurgen Klopp marked his first Merseyside derby with a 4-0 win over Everton, providing a stark contrast to Liverpool’s efforts under Brendan Rodgers in October.

Goals from Danny Ings and Romelu Lukaku decided a close-fought encounter at Goodison Park just over six months ago, with Rodgers given his marching orders just hours after full-time.

It was far from the most disastrous result of Rodgers’ last months, but a draw in a derby was enough to compound the pressure on an increasingly desperate manager, and Fenway Sports Group saw fit to cut the cord just two months into the season.

Klopp arrived a week later, but had to wait for his first taste of the Merseyside derby until Wednesday night, when his Liverpool side duly obliged with an emphatic 4-0 victory at Anfield.

This win serves as another statement of intent from the Reds as they enjoy a resurgence under Klopp this spring.

Comparing October’s derby draw with Wednesday night’s triumph underlines the many differences Klopp has made in his short time at the club so far.

October’s derby found Rodgers in survival mode, with his backing from the crowd and the boardroom diminishing.

After beginning the season utilising variations of 4-2-3-1 and 4-3-3 formations, marshalled by his first-choice back four of Nathaniel Clyne, Martin Skrtel, Dejan Lovren and Joe Gomez, Rodgers reverted to his tried-and-trusted three-man back line by September.

Restored alongside Skrtel were Emre Can and Mamadou Sakho, reprising their roles from Liverpool’s lengthy unbeaten run in 2014/15.

After two losses prior to this switch—to West Ham United and Man United—Rodgers’ 3-4-1-2 gave the Reds a form of stability.

Draws with Bordeaux, Norwich City and Carlisle United (eventually won on penalties) followed, before a 3-2 win at home to Aston Villa hinted at a return to form.

Liverpool headed into the derby on the back of a 1-1 draw at home to FC Sion, but despite a minor upturn in form, the pressure continued to mount on Rodgers. At Goodison Park, the Reds were dominated by Romelu Lukaku; the Belgian continually finding space behind Can, Skrtel and Sakho.

After Ings put Liverpool ahead by nodding home James Milner‘s cross, Lukaku pounced on a poor clearance from Can to power home beyond Simon Mignolet to give Everton the draw.

Giving his take after the game, Rodgers once again spoke of “transition,” and with his side’s disjointed performance, it was clear to see why.

“What is forgotten is we lost four catalysts from team and that is huge,” he said.. “It is a constant rebuilding—this season is about that as well.”

But FSG saw fit to introduce a new catalyst, and Klopp’s instant impact has poured cold water on the notion of transition. Wednesday night’s victory made it four in a row for Klopp’s Liverpool, as they push for a triumphant conclusion to the 2015/16 campaign.

That this was just over six months on from Rodgers’ departure is remarkable, given the sea change in the Reds’ approach against Everton at Anfield.

Perhaps most notably, Klopp’s well-drilled system has given Liverpool a solid platform.

For much of his reign so far, the German has relied on his favoured 4-2-3-1 formation, though experiments with a 4-3-3 and a 4-4-2 diamond have given Klopp’s side success in turns, too.

Not once has Klopp opted for a three-man defence, instead putting his faith in a regular back four of Clyne, Lovren, Sakho and Alberto Moreno; the latter a player shunted into the periphery by Rodgers.

This settled base has allowed Klopp to provide his flourish on the training ground, and Liverpool’s high-intensity pressing game saw them gain the upper hand at Anfield.

On Wednesday night, the Reds made eight successful tackles in the Everton half; back in October, Rodgers’ side made just four.

This can be attributed to a change in personnel within the Liverpool starting lineup, with £29 million summer signing Roberto Firmino a major factor behind this transformation.

The No. 11 was worryingly overlooked by Rodgers following his move from Hoffenheim, but has now been restored to a key role at the heart of Klopp’s attacking line.

Similarly, Adam Lallana, on the bench for October’s draw, has risen to prominence as the instigator of Klopp’s press—far from his previous role as the face of Liverpool’s PR department.

Many of the faces remain the same, however, with seven players—Mignolet, Clyne, Sakho, Moreno, Milner, Lucas Leiva and Philippe Coutinho—starting both games, but this serves to highlight the change in mentality under Klopp.

Crucially, the 48-year-old’s post-match address made a significant contrast to Rodgers’ from six months ago: “We have only really good players. There is no player in the squad where I think why is he here? This is a really, really good team.”

A Platform, Not a Pitfall

While October’s stalemate proved Rodgers’ downfall, Klopp’s first foray into the Merseyside derby has given the German another stepping stone towards success at Liverpool.

An emphatic performance over a decidedly off-colour Toffees side, hampered by a red card to Ramiro Funes Mori, has kept the momentum going for the Reds, as they prepare for their final games of 2015/16.

Next up is a clash with Rafa Benitez’s Newcastle United: a side enjoying a minor boost in fortunes of late, buoyed by a 1-1 draw with Man City last time out.

After that comes the first leg of Liverpool’s Europa League semi-final against Villarreal, away at the La Liga side’s Estadio El Madrigal, and an encounter that requires a positive performance from the Reds.

Ahead of these two clashes, Liverpool find themselves in a strong position both in Europe and, surprisingly, now in the Premier League—six points off fourth place with five games to play.

Wednesday night’s victory at Anfield showed how far Liverpool have come under Klopp so far, and remarkably, this came without first-choice midfielders Can and captain Jordan Henderson.

This win should now be used as a platform, as the Reds’ quick transition continues.