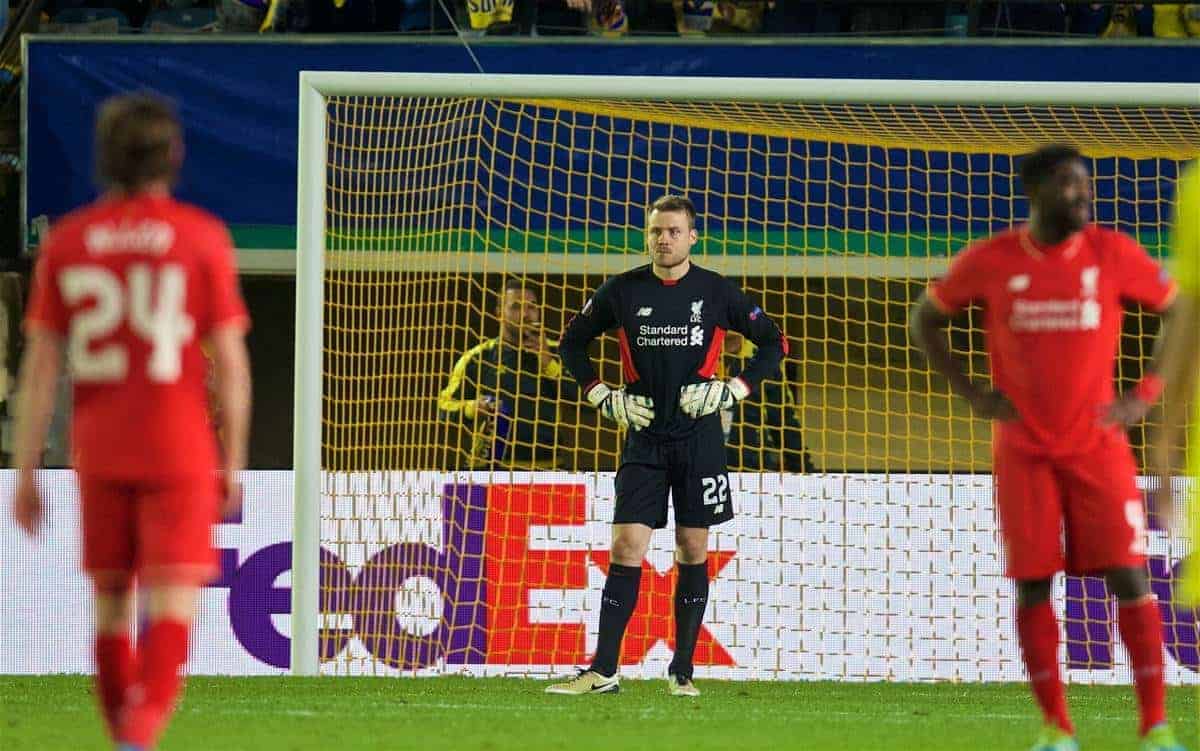 After Liverpool went down 1-0 to Villarreal in the Europa League semi-final first leg, we review how the media reacted to the narrow defeat.

Jurgen Klopp’s Reds will have to do it the hard way once again at Anfield after suffering a last-gasp loss to the Yellow Submarine in Spain.

Second-half substitute Adrian Lopez came on to net a stoppage-time winner for Marcelino’s men, who eventually punished an overly cautious display from Klopp’s side at El Madrigal where a positive result was certainly obtainable.

The narrow defeat leaves Liverpool without a crucial away goal and now needing to win by a two-goal margin on Merseyside – if they are to avoid extra time and penalties – to keep their dreams of European glory alive.

A do-or-die second leg now awaits the Reds in seven days’ time, and here is how the media saw the contest.

Some reporters felt Jurgen Klopp showed too much respect to his opponents on the night with a cautious setup and unambitious display, for which he paid the price.

The Telegraph‘s Jason Burt wrote on “not a good night” for Klopp:

And this was ultimately not a good night for Jürgen Klopp despite that optimism, mega-watt smile and post-match rallying cry that it would all be very different at the “holy place” that is Anfield next week.

But Klopp settled for a draw here and came unstuck, undone by careless defending and the wrong substitutions.

The Liverpool boss will also surely rue the fact that his side didn’t show more ambition on a night when they looked content to simply shut Villarreal out.

In the end they paid the price for lacking the kind of positivity and intent Kopites have come to expect under Klopp.

Perhaps Jurgen Klopp gave them too much respect, not specifically by not starting with Daniel Sturridge, but by not introducing him at all, even after it became clear that there was little to fear from the Spanish side.

For Goal.com, Melissa Reddy felt it was an “out of character” approach by the Reds boss, and one that proved costly:

That he chose not to go for the “work them then hurt them” approach was out of character. Klopp is one for risks, but he stayed safe on Thursday night.

The decisions – in particular keeping Daniel Sturridge on the bench – seemed designed to ensure Liverpool didn’t lose a fixture they looked like they could edge with a little extra firepower.

Reporters lamented Liverpool’s late collapse with some feeling it showed the Reds’ lack of game-management, and that there is still further learning to do under Klopp.

The timing of the breakthrough was bad enough, though the sight of Liverpool stranded high up the pitch, inviting the counter attack with just one accurate pass, defied belief.

Simon Hughes, writing for the Independent, bemoaned a lapse of concentration that cost the Reds a useful draw:

When Christian Benteke was used instead and dispatched with an instruction to hold the ball up, it felt like Liverpool had settled for a draw. But for a lapse in concentration, it would have been achieved.

It was the kind of needless slip of concentration after 91 minutes of hard toil that tells you there is still much to learn for this Liverpool side, for all the heroics at home to Borussia Dortmund in the previous round.

The Mail‘s Martin Samuel focussed on Alberto Moreno’s impact on the moments that decided the contest:

Alberto Moreno ran the length of the pitch, in injury time, and shot over the bar. Denis Suarez, of Villarreal, kept him company all the way.

When, a minute later, the roles were reversed, Moreno didn’t have the heart for it. Suarez was still going, Villarreal were still going, but Liverpool’s left-back had decided he had done enough.

When Klopp reviews this game over the coming days he will know the significance of those late runs, the ones made and the ones that were not.

In a game of fine margins, those closing moments at the death undid the toil of Jurgen Klopp’s side at El Madrigal and placed his in-game management under the microscope. An unused substitute on a night an away goal and positive result was obtainable, there was much focus on Klopp’s decision to overlook Daniel Sturridge.

The Telegraph‘s Chris Bascombe feels Klopp may regret his decision to overlook the striker:

Leaving out Daniel Sturridge for a game of this magnitude when he is still regaining full match fitness is one thing, but doing so when he is approaching top form is another.

The Liverpool manager may end up regretting his selections.

Joyce felt a workman Reds lineup missed Sturridge’s quality and he must start next week:

[Klopp] had opted for workers when selecting Firmino ahead of him despite the England striker having pilfered six goals in his last 10 appearances.

Yet Liverpool need their best goalscorer on the pitch and must sacrifice something in order to do so.

Wallace wrote that Sturridge’s omission showed Klopp’s lack of trust in the striker on the European stage:

Being left out in favour of Divock Origi for the two legs of the quarter-final is one thing, but being chosen second to Firmino, quite another.

The England striker has scored in each of his last four Premier League games but in Europe, Klopp seems to regard him as a potential vulnerability.

Klopp always speaks highly of him, but his actions are starting to talk a whole lot louder, and increasingly it looks as if England’s World Cup striker may need to be on the move again, certainly if he is to contest for a starting place against Harry Kane.

Burt felt Roberto Firmino failed to offer what was intended in Sturridge’s absence:

Maybe the mistake was not leaving out Daniel Sturridge but leaving Roberto Firmino on the pitch until the 90th minute. This was not a good night for the Brazilian forward, who proved almost anonymous, save for a second-half shot that was smartly pushed onto the post by Villarreal goalkeeper Sergio Asenjo.

Despite falling to a tie-changing late defeat, there was still praise for some individual performances.

The Brazilian has only played a bit part for much of the season but he showed no sign of rustiness at the Madrigal, slotting into the midfield and protecting the backline brilliantly.

He stopped the supply to the dangerous Cedric Bakambu, leaving Villarreal looking toothless at times. A fine display from a top professional.

Given a job to do in front of the back four and did that job just about as well as it’s possible to do it. He made numerous valuable interceptions and rarely wasted a pass all night.

Confident, composed and playing with a self-belief that stands out a mile, the Welshman continued his impressive recent form. He passed it well, covered the spaces and collected second balls, got Liverpool playing forwards and never looked flustered.

And finally, Bascombe singled out James Milner, who he named Man of the Match:

Milner has been a different player since taking the armband from the luckless Jordan Henderson. He covered every blade of grass and demonstrated his experience.

He’s always criticised but it’s easy to see why managers and team mates swear by him. There are compulsory demands in a footballer – work hard and keep it simple. Milner excels at playing to orders.