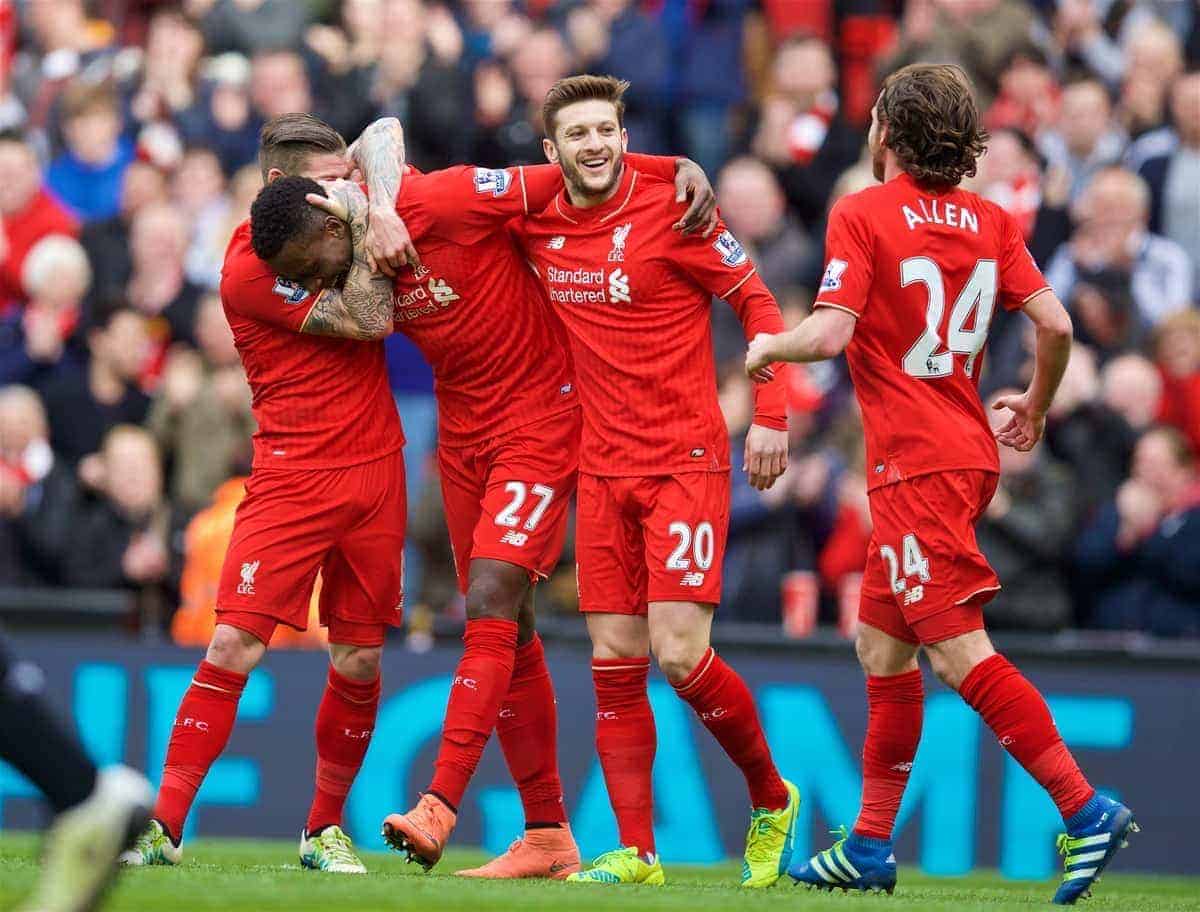 Liverpool produced an excellent all-round display on their way to a 4-1 win at home to Stoke City on Sunday afternoon, and here we rate their performances.

Mignolet took time to adjust to the blustery conditions at Anfield, with a number of wayward passes in the opening stages as the Belgian looked to employ his typical, direct approach in possession, but he soon grew into the game.

As his faith in a rare centre-back pairing of Martin Skrtel and Kolo Toure grew, Mignolet’s performance improved, and while relatively untested, he gave a good account of himself.

One of only four players to keep his place in Liverpool’s much-changed starting lineup, Clyne was surprisingly preferred to Jon Flanagan despite Jurgen Klopp‘s rotation.

This may have been to balance out the calamity-on-paper that was the trio of Skrtel, Toure and Alberto Moreno, and it certainly paid off for Klopp, as Clyne performed consistently at both ends of the pitch.

It was something of a hit-and-miss afternoon for Skrtel, who initially struggled up against the lofty, physical Peter Crouch, bowling into challenges recklessly and making a handful of questionable clearances.

But, overall, the Slovak coped well on his first start back from injury—though he remains firmly behind Toure, Dejan Lovren and Mamadou Sakho in terms of Liverpool’s centre-backs.

Like Skrtel, Toure was shaky in the opening stages, and at fault for Bojan Krkic’s equaliser on 22 minutes, disrupting Liverpool’s defensive line to allow the Spaniard onside to head home Xherdan Shaqiri‘s free-kick.

But as the game went on, Toure improved, utilising his strength and intelligent reading of the game to break up play efficiently, nullifying Stoke’s attacking moves. Moreno has been subject to much criticism from the Liverpool support since the turn of the year—and often from the touchline, too—but the left-back was in strong form in a goalscoring display at Anfield.

His opening strike, a powerful, swerving effort beyond a helpless Jakob Haugaard, was of the highest quality, and while he wasn’t as clinical as Clyne in other areas, he was comfortable throughout.

Making his first Premier League start, after just returning after two months out with an ankle injury, Stewart provided Klopp with much food for thought for the future.

Despite his inexperience, Stewart kept his head up throughout, looking for openings in the attacking third—making two key passes, level with Moreno and Clyne—as well as breaking up play efficiently in his role as Liverpool’s holding midfielder. A revelation.

After a brilliant display against Borussia Dortmund at the Westfalenstadion last week, Milner continued to dominate in a fluid role in Klopp’s three-man midfield, and was similarly instrumental on the switch to a 4-4-2 diamond at half-time.

Able to drift wide, Milner found himself in positions to prompt attacks with his pinpoint delivery, as well as pressing well off the ball to keep momentum for his side.

Quite what Allen has to do to convince Klopp of his value to Liverpool in the long term is a mystery, as the Welshman has been in top form whenever called upon by the German this season.

At Anfield on Sunday, he was at his tenacious best, denying Mark Hughes’ midfield pairing of Geoff Cameron and Gianelli Imbula time on the ball, as well as driving the Reds forward into attack.

Substituted with 12 minutes to play, Allen is guaranteed a start on Thursday night against Dortmund. Producing a moment of magic in what was a tepid first half at Anfield, Ojo showed his potential: unfazed by the occasion on his first start for the club, Ojo ploughed beyond Shaqiri on the left flank before teeing up Daniel Sturridge‘s header with an inch-perfect cross.

Other than this brilliant assist, Ojo put himself about well in his 45 minutes on the field, and can be encouraged by his first foray into Klopp’s starting lineup—the first of many.

Likely still making his way back to full fitness after a hamstring injury, Firmino had a real off day at Anfield, struggling to make an impact—particularly in his floating left-sided role in the first half.

When moved into his natural No. 10 role in the second half, Firmino did improve, with his work pressing the Stoke defence particularly useful, but he was far from his best on Sunday.

After Divock Origi‘s emphatic showing at the Westfalenstadion, sections of the Liverpool support questioned Sturridge’s role at the club in the long term, but restored to Klopp’s starting lineup at Anfield, the 26-year-old provided a reminder of his enduring quality.

On hand to put Liverpool 2-1 up before half-time, Sturridge was a constant threat to the Stoke defence both on and off the ball, with his linkup play alongside Origi hugely promising.

Divock Origi (on for Ojo, 46′) – 8.5 (Man of the Match) – Continues to grow in confidence in his focal role under Klopp, and with two goals and a bullish attacking display, Origi highlighted his immense potential even further.

Adam Lallana (on for Firmino, 63′) – 7 – Brought on for the sluggish Firmino, Lallana provided Liverpool with a useful outlet in the final third, crafting some positive openings.

Lucas Leiva (on for Allen, 78′) – 6.5 – Had little time to impose himself on the clash, but coped well on his return from a long-term thigh injury.

Klopp’s decision to rest the majority of his first-choice starting lineup was a necessary one, but even the German will have been surprised with how well his makeshift selection fared against a strong Stoke side.

What was most striking about Klopp’s in-game management was his switch to a 4-4-2 diamond at half-time, replacing the impressive Ojo with Origi and giving Sturridge support in attack.

This may have encouraged him to unleash the Sturridge-Origi attack against Dortmund at Anfield—and few could argue against that.