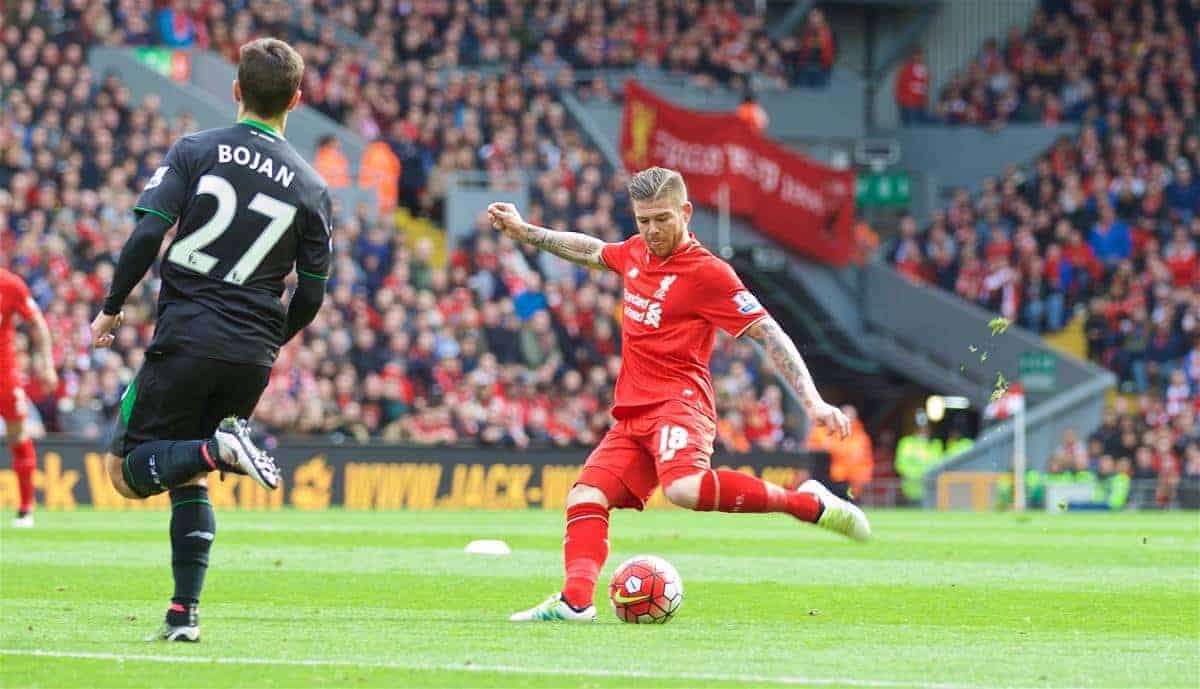 Liverpool eased to a 4-1 win over Stoke at Anfield on Sunday afternoon, and we bring you the best fan reaction from during and after the game.

This was one of those end-of season matches that comes along every now and then, with Stoke never threatening to do much of note at Anfield.

Alberto Moreno drilled Liverpool into an early lead, and although Bojan equalised soon after, Daniel Sturridge made it 2-1 before half-time.

Divock Origi was introduced for the second-half, and his excellent cameo was rewarded with two goals. The Belgian is very much a man in form.

It was an enjoyable afternoon for Jurgen Klopp and his side, who leapfrog Stoke into eighth in the Premier League table.

Sheyi Ojo was given his debut by Klopp, and social media showed its support for the 18-year-old:

Liverpool make 7 changes. Dortmund made 8 changes for their derby against Schalke. Thursday a big deal for both. Go Ojo!

Sheyi Ojo makes his first start for #LFC today. Much deserved from the 18-year-old who's improved significantly since returning from Wolves.

Delighted for @sheyi_ojo getting his first league start, fully deserved. Big talent. Great opportunity for him to impress.

Premier League handed its Sheyi Ojo debut today. Is the League ready? Can it cope with the pace and power of Sheyi Ojo?

Great goal, Moreno being urged to shoot so he did. 1-0 #LFC

What a hit son! pic.twitter.com/VLC8HnFpyc

Ojo’s brilliance allowed Sturridge to make it 2-1, as the teenager made a real impression in the opening 45 minutes at Anfield:

Ojo has a goal or assist every 45 minutes for Liverpool this season!

Fantastic from Ojo, missed that pace, trickery and end-quality from wide positions all season.

What a lovely assist for Sheyi Ojo. Stark contrast between him and Jordon Ibe at the moment; Ojo with more of a cutting edge. #LFC

Origi made a huge impact in the second-half, with supporters lauding the in-form youngster:

Anybody get instant flash backs of Fernando Torres vs Sunderland?.. #Origi #LFC

A man in form pic.twitter.com/ZlKsk7mFIS

Following the final whistle, fans gave their thoughts on the richly-deserved win:

Impressed with Stewart and Ojo on their full Premier League debuts. Stewart assured throughout, Ojo a constant threat, assist was excellent.

Made up with that today, well in Redmen, 4-1 and it felt like #LFC were just coasting along.We're saving the blood and thunder for Thursday.

Very enjoyable, that was. Couple of weeks back said that I liked how Origi was performing but he needed goals. He's answered me this week.

Hope in your heart on the forum:

One of the very best for me was Milner, with a genuine fighting display, and two assists to his name. Stewart did the team a lot of good as well, very glad to see him back into the fold!

ptt on the forum:

Excellent game, loved every minute of it. Hearty plaudits to Milner and Origi. Roll on the Germans!

No Klopp hug for you Sparky. You don't deserve it. Let that sink in. #LFC #LIVSTK pic.twitter.com/Z8jwsnrdC3

Glad to see Stoke blown away like that, The confidence is flowing again even with seven changes.

Lovely, relaxed game to watch. Easy win in the end, the type of which I’d like to see many more of. Milner, Allen, Origi were the standout performers for me.

This whole "Welsh Pirlo" thing takes away from the fact that Joe Allen is a very good footballer when he's fit and gets a run of games.