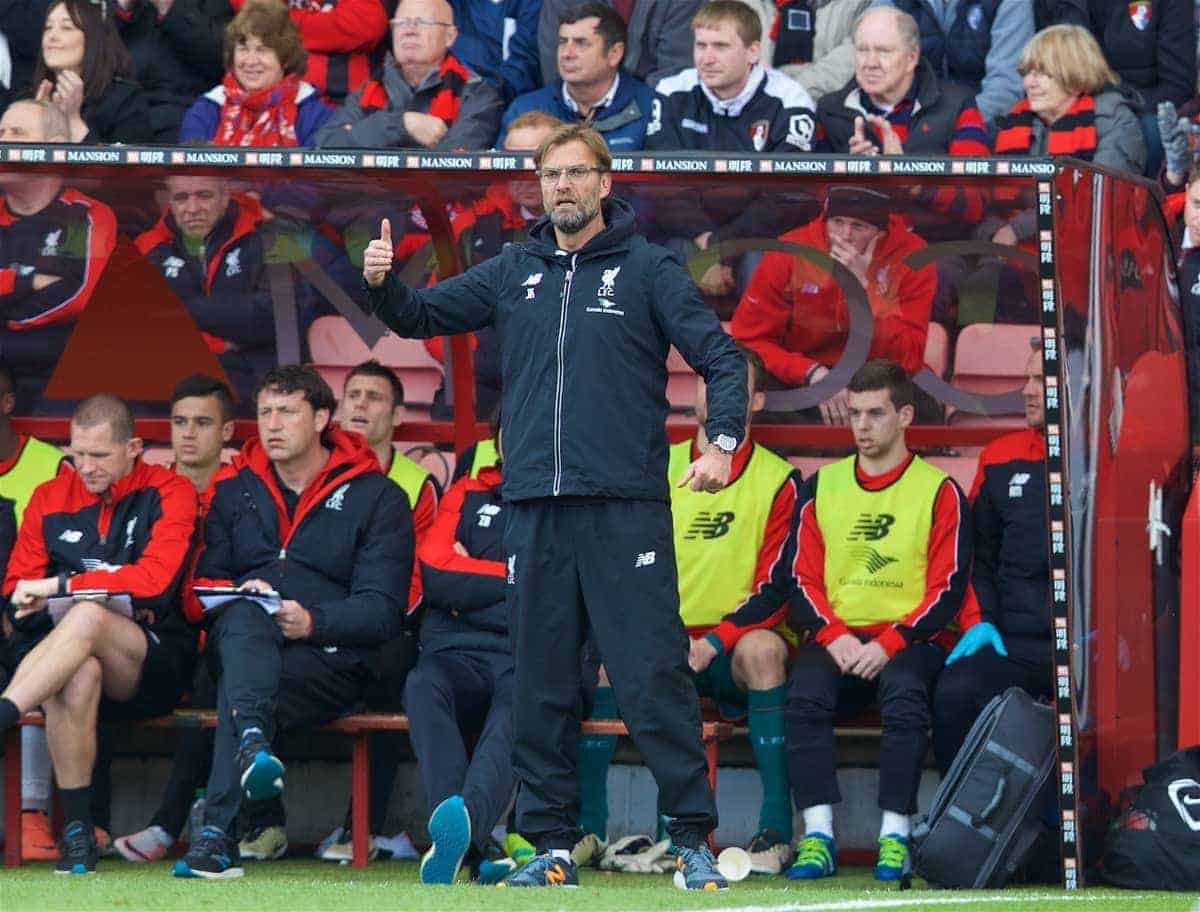 Jurgen Klopp insists Daniel Sturridge is not “undroppable”, even when the Liverpool striker impresses as he did in Sunday’s 2-1 Barclays Premier League win at Bournemouth.

The England international performed to near his exceptional best in creating the visitors’ opening goal for Roberto Firmino, scoring their second and almost adding a further two following his recall to the starting line-up.

Having previously told the injury-prone frontman he needed to learn the difference between “serious pain and what is only pain”, and recently preferring Divock Origi for Liverpool’s biggest games, Klopp responded angrily when asked about Sturridge’s performance before that of the team.

“Nobody is undroppable,” said the 48-year-old, who made 10 changes from the side which defeated Borussia Dortmund on Thursday, including handing a debut to goalkeeper Danny Ward.

“I never look at any player and think, ‘I can’t leave him out’. As a manager, I decide if I play with one, two, three or four strikers.”

Asked whether Sturridge’s display was the response he was looking for, having started on the bench against Dortmund, Klopp replied: “Yes. He really is in really good shape. Mental-wise and physical-wise it’s really good, and for us so important, because, for example, Roberto Firmino now has a problem (injury) after he was in perfect shape.

“He’s a brilliant player. (But) this is a game with 11 players. And we come to this. You are interested in one player. Each player had influence. I understand it as a team game. I enjoyed the game of Daniel Sturridge.

“(But) we have a football game and you want to talk about one player at the first moment. That’s not the role I like. He was very good, but if you are not interested in the game…”

Klopp was then asked if he agreed Sturridge, who has been linked with a summer exit from Anfield, won Sunday’s game for Liverpool, and he responded: “No. “That’s how you understand football? You work really in sport? One player can win a game?

“Was there a cross (for Sturridge’s goal) or not? We live on different planets.” Regardless of his manager’s belief, Sturridge’s goal – a header in first-half stoppage time from Jordon Ibe’s free-kick, after his back-heel had earlier provided a tap-in opener for Firmino – was his sixth in the league this season and on only his eighth start.

Thirteenth-placed Bournemouth provided poor opposition, as they have done since last month’s 3-2 defeat of Swansea took their total to the campaign to 41 points and lifted them to the brink of safety.

And manager Eddie Howe acknowledged his side had been below par, particularly in the first half.

“For the home team, we didn’t get near their goal enough, put them under enough pressure,” he said.

“The second half was a lot better. We grew into the game, ended well with a good goal and could have snatched a point at the end.”

The only real positive for the Cherries arrived when Joshua King notched an exceptional consolation goal in the third minute of second-half stoppage time.

But, at 2-0 down, King flicked a pass against Lucas Leiva‘s hand before Kolo Toure handled during a tussle with Lewis Grabban, and Howe was left to ponder what might have been.

“I think there were three (refereeing decisions that went against us) in total and referee (Mike Jones) has made his call,” he added.

“They were difficult ones. They were quite tight to the player, but they definitely hit the arm. The last one’s probably our best case.”