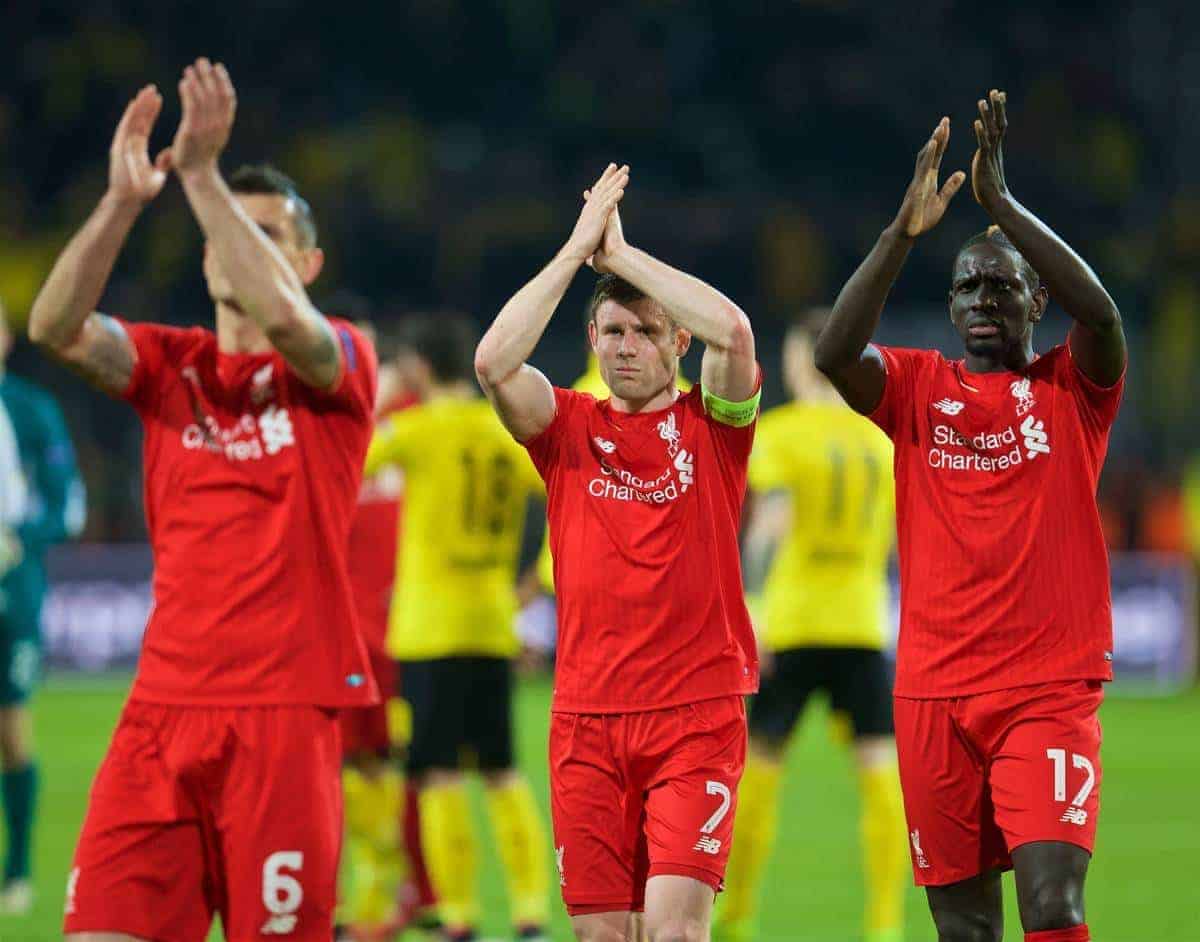 Following an entertaining night of Europa League quarter-final first-leg action, we round up how the competition’s eight remaining sides fared.

With the lure of a Champions League place next season for the Europa League winners, Thursday’s clashes had extra spice to them in comparison to years gone by.

Four intriguing showdowns took place across the continent, with the quartet of ties all very much alive heading into next week’s second legs.

Liverpool Excel Away to the Favourites

Liverpool’s trip to Borussia Dortmund was understandably the standout tie of the round, as Jurgen Klopp returned to take on his former club.

While many tipped BVB to dish out a comprehensive beating on the Reds at Signal Iduna Park, an impressive team performance from Klopp’s men earned them a richly deserved 1-1 draw.

Divock Origi fired the visitors into a first-half lead – the decision to start the Belgian in place of Daniel Sturridge was vindicated – but Mats Hummels levelled things up shortly after half-time.

The tie is perfectly poised going into next Thursday’s showdown at Anfield, in what promises to be a magnificent occasion.

Thomas Tuchel’s tournament favourites still just have the edge in the tie, despite failing to win their home leg, but Liverpool have a golden opportunity to reach the semi-finals.

If they knock Dortmund out, they may feel as though their name is on the trophy.

Shakhtar Donetsk’s trip to Sporting Braga was a tricky match to predict, with the former narrow favourites to progress in the tie.

The Ukrainian giants produced a smash-and-grab victory over their opponents, but a late Braga goal has kept their faint hopes of reaching the last four alive.

In truth, the hosts were the better side for much of the game, but numerous missed chances were eventually punished by a ruthless Shakhtar side.

Yaroslav Rakitskiy’s deflected volley just before the break was a real blow for Braga, and when Facundo Ferreyra doubled the lead with 15 minutes remaining, the Portuguese team looked doomed.

In the final minute however, substitute Wilson Eduardo headed home, and you just wonder whether it has given them a much-needed momentum boost ahead of the trip to Shakhtar next week.

It was Braga’s first home defeat in 13 matches.

Because the Europa League fails to gain the same level of recognition as the Champions League, it is very easy for Sevilla’s feats in the competition to pass you by.

The La Liga outfit are looking for a third successive triumph, and a fifth in 11 years, which is a mighty impressive statistic.

Having been drawn against fellow Spanish side Athletic Bilbao in the quarters, they made the trip north to San Mames on Thursday evening.

Unai Emery’s team went behind early in the second half, with Bilbao striker Aritz Aduriz scoring yet again, as he continues to lead the goal charts in this season’s competition.

Timothee Kolodzieczak equalised nine minutes later, however, scoring that all-important away goal, and the visitors still had time to gain a priceless victory.

Vicente Iborra fired home late in the day to seal a 2-1 win, and Sevilla will really fancy their chances of completing a Europa League hat-trick in May.

In the last 16, Villarreal saw off the challenge of a talented, dangerous Bayer Leverksuen outfit, thanks to two goals from young forward Cedric Bakambu.

The Congo international once again proved to be his side’s inspiration, as they welcomed Sparta Prague to El Madrigal.

It is a tie that is very finely poised, however.

Bakambu opened the scoring early on, but there was an element of fortune to the goal, as the 24-year-old charged down goalkeeper David Bicik’s clearance. The subsequent block saw the ball fly into the net.

Jakub Brabec equalised for the visitors in first-half stoppage time, in what was an added bonus for the Europa League outsiders.

Bakambu scored his second of the night with 63 minutes on the clock, finishing clinically, although he missed good chances to score a hat-trick on the night.

Villarreal will not exactly be delighted with the result, considering they conceded an away goal, but they should still have enough in Prague to book a semi-final place.