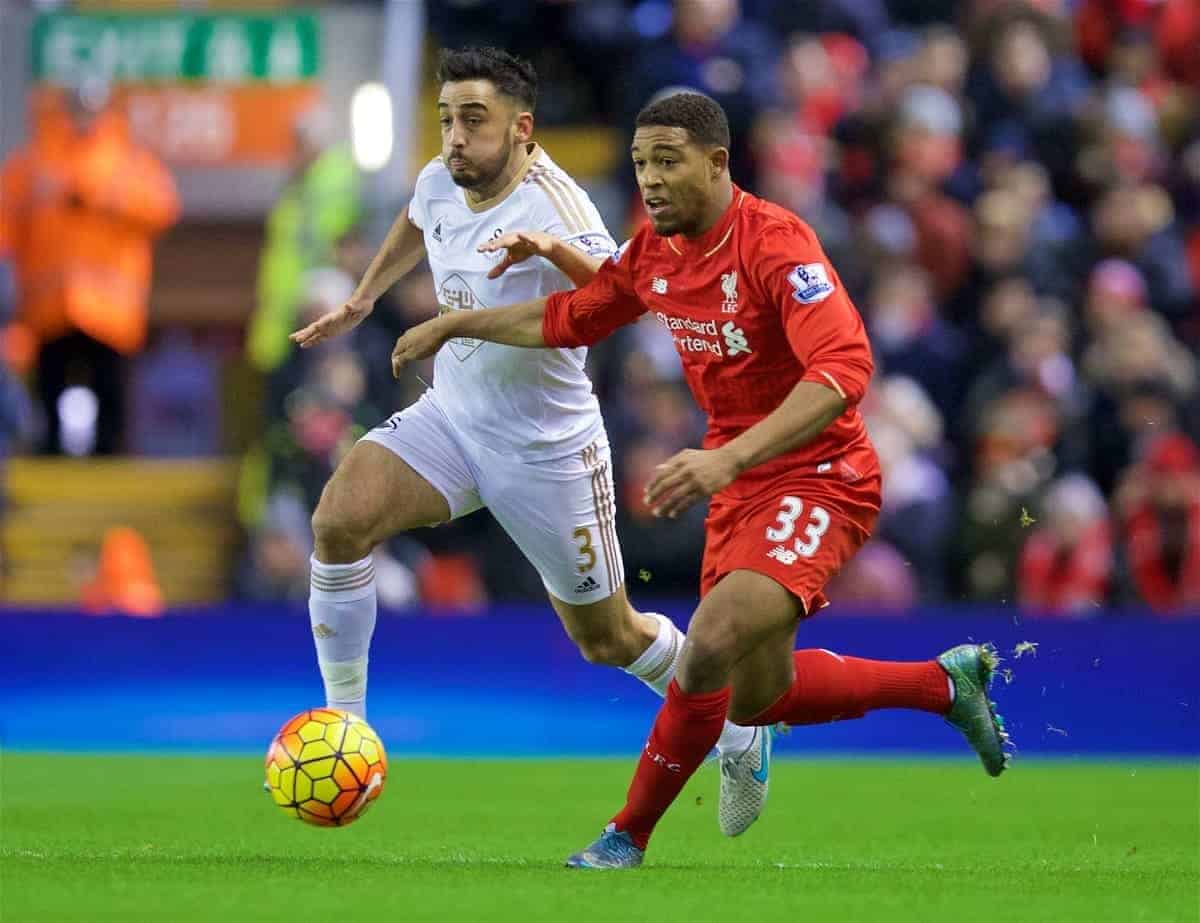 Liverpool make the Premier League trip to Swansea on Sunday lunchtime, as they look to bounce back from their Europa League defeat to Villarreal.

Thursday’s 1-0 defeat in Spain was a tough one to take, with Adrian Lopez’s last-gasp effort giving the Reds plenty to do in next week’s semi-final second leg.

The performance was good in general, if a little on the negative side, but once again a fairly soft goal proved to be game-changing.

Sunday’s trip to the Liberty Stadium is one of Liverpool’s least important matches of the season, although finishing in the top six must still be an aim.

Jurgen Klopp is sure to ring the changes – it could be that all 11 starters against Villarreal do not feature – with youngsters given a chance to impress once again.

Thursday’s defeat was the first that Liverpool have suffered since their capitulation at Southampton six weeks ago, which outlines their good recent form.

Things have gradually been taking shape under Klopp, with goals coming at a rapid rate and improvements noticeable in all areas of the pitch.

Despite this change in fortunes, the Reds do still lack of bit consistency in terms of their performances, with the limp 2-2 draw at home to Newcastle United last week a far cry from the footballing lesson they gave Everton four days earlier.

They have undoubtedly been one of the form teams of 2016, however, and once Klopp has worked his magic in the summer transfer window, they should once again go up another gear.

Swansea have endured a disappointing season, especially in comparison to their consistent run of mid-table finishes since promotion to the Premier League in 2011.

They currently sit 15th in the table, and it has only been in the last month or so that their relegation fears have completely eased.

The Swans were soundly beaten at Leicester City last weekend, and an insipid 3-0 loss to Newcastle in their previous match had all the hallmarks of a team already on their summer holidays.

Relegation has never quite felt on the cards, though, with Swansea chipping away at points throughout the campaign. A tight game at Anfield back in late November was settled by one goal, as Liverpool snuck past the visitors in gritty fashion.

James Milner‘s 62nd-minute penalty won it for the Reds, after left-back Neil Taylor was penalised for handball inside the area.

Matches between the two sides have invariably been tight in the five years since Swansea’s promotion to the top-flight, with last season’s showdown at the Liberty Stadium proof of that.

The most notable recent clash was the 4-3 win at Anfield in February 2014, as doubles from Daniel Sturridge and Jordan Henderson helped Liverpool continue their title charge in entertaining fashion.

Swansea have not beaten the Reds since October 2012, when a 3-1 away win in the League Cup sent Rodgers’ men crashing out of the competition.

Their last Premier League triumph came in May of the same year – Rodgers was still Swansea manager at this point – when Danny Graham’s late goal saw the Swans end their first season in the Premier League with a win.

Sunday could represent a good chance for Francesco Guidolin’s side to defeat Liverpool, considering how weak their starting lineup is likely to be, but Klopp will be determined to put last weekend’s draw with the Magpies behind him. There are no new injury concerns for Klopp ahead of the match, with everyone coming through the Villarreal game unscathed.

Philippe Coutinho did have to be withdrawn at half-time because he felt unwell, but the Brazilian is thought to have recovered. It would be a surprise if he featured on Sunday, though.

Mamadou Sakho will not feature for the rest of the season, following his initial 30-day suspension by UEFA, while Emre Can, Jordan Henderson and Divock Origi are all still missing.

Danny Ings trained with Liverpool U21s on Thursday, which is great news for the Englishman, having missed a huge chunk of the season with a cruciate ligament injury.

It will be interesting to see whether Sturridge plays against Swansea or not, with many fans left surprised that he didn’t feature at all on Thursday.

The 26-year-old may well start, as could Christian Benteke, while the likes of Danny Ward, Connor Randall, Martin Skrtel, Brad Smith, Jordon Ibe and Sheyi Ojo look set to play as well.

Leroy Fer is the only Swansea player of note who is unavailable for the match, while Alberto Paloschi is also missing. Both have hamstring injuries.

Guidolin’s biggest task is to get his players revved up for the game, with their recent performances lacking a huge amount of intensity.

Klopp admits changes will be made to his team, following Thursday’s exploits in Spain:

“We have to respect the intensity of the last game and think about the line-up for Sunday.

“If we think too much about Thursday (the second-leg at Anfield) then we have no chance on Sunday, and we respect the Premier League.

“Of course, we need to have a look at the players from yesterday. We got home at 3:30am and I’m sure nobody slept immediately when they got home. I have to make a decision on the line-up when I see them later.

“The other players were impressive against Bournemouth and Stoke, and hopefully we can do it again on Sunday. It is not possible to play with the same line-up as Villarreal. It doesn’t make sense.”

Meanwhile, Guidolin has insisted his side aren’t already ‘on the beach’, saying Swansea will approach Sunday’s clash like a final:

“I don’t know in the Premier League if this is a usual situation because there are other teams the same as us.

“Bournemouth, Stoke, Watford, Crystal Palace and West Brom [are] also all in our situation [on] around 40 points.

“I spoke with my players and they are convinced to play the right way and play the remaining games as three finals.”

Swansea are, perhaps surprisingly, 43/20 to beat the Reds this weekend. Considering the number of alterations Klopp will make, that looks a good bet.

Liverpool are 13/10 to add another three points to their Premier League tally – catching West Ham United and Man United is still not out of the question – while the draw is 5/2.

Both teams to score is 37/50, which feels likely when you remember Swansea have conceded seven goals in their last two matches, and that the Reds will have an inexperienced back line.

Sturridge is the 22/5 favourite to open the scoring, which suggests the bookies feel he will start, while Benteke is 5/1 to net first.

Bafetimbi Gomis (23/4) is seen as Swansea’s most likely player to give his side the lead, while in-form Gylfi Sigurdsson is not a bad bet at 6/1.