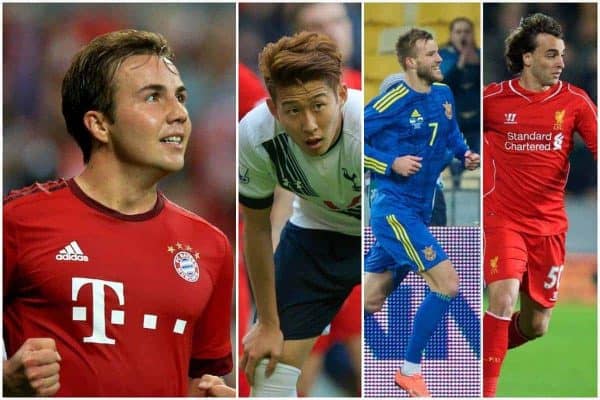 With key summer target Mario Gotze set to slip through fingers, Liverpool may need to turn their attention to a host of alternatives.

Gotze looked all set to join the Reds in a £20 million deal this summer, with Bayern Munich intimating that the 23-year-old would surplus to requirements and the player himself researching life on Merseyside.

But with one fell swoop, the former Borussia Dortmund star pulled the rug out from underneath his old manager, Jurgen Klopp, sacking his influential agent and committing his future to Bayern.

It was a shock development in what has been a frustrating saga for Liverpool supporters, and no doubt Klopp himself, leaving the German with little choice at this stage but to pursue alternatives.

Gotze is a premier talent, and one of Europe’s most promising creative players, so formulating a plan B could prove difficult.

Southampton‘s Sadio Mane has emerged as a possible target in the wake of Gotze’s commitment to Bayern, though the Reds’ reported interest has failed to capture the imaginations of the Kop.

So here are five more players Liverpool should consider if they fail to sign Gotze this summer.

As Liverpool stepped up their pursuit of an attacking midfielder last summer, before eventually landing on star man Roberto Firmino, they were said to have scouted Son Heung-Min extensively.

The South Korean made the move to Tottenham Hotspur from Bayer Leverkusen in August, but after a season under Mauricio Pochettino, he is reported to have been made available for transfer.

This could represent a red flag for potential suitors—and particularly Klopp, whose high-intensity brand of attacking football bears many similarities with that of Pochettino—but the 23-year-old is far from a lost cause.

As proved during his time with Hamburger SV and Leverkusen, Son is a hardworking, versatile forward option who utilises his nimble frame to drive through defences, and with 57 strikes in 205 senior club appearances, is comfortable and composed in front of goal.

Able to play in every role across the front line including as a centre-forward, Son could slot into Klopp’s attacking line with ease, and Liverpool could pick up a bargain if they opted to sign him this summer.

Whoever signs Andriy Yarmolenko when he decides to leave Dynamo Kyiv will be acquiring an absolute gem, and with the likelihood of his departure increasing by the transfer window, Liverpool should act quickly if he becomes available.

The 26-year-old’s credentials speak for themselves, with Yarmolenko having scored 19 goals and laid on 13 assists in 34 appearances for Kyiv this season.

While many of these have come in the less-competitive Ukrainian Premier League, his two strikes in the Champions League, along with his impressive display at home to Manchester City, are a testament to his enduring quality.

Far from the orthodox winger, Yarmolenko is comparable to Gareth Bale and Cristiano Ronaldo in terms of physicality: at 6’2″, his bulky frame belies his pace and skill.

With Firmino established as Klopp’s first-choice No. 10, and Philippe Coutinho a key figure on the left flank, signing Yarmolenko to boost Liverpool’s right-sided ranks would be a wise move.

Signing Gotze would have been a major boost for Liverpool not only on the pitch, but also in the stands, with the acquisition of a big-name marquee player poised to capture the imaginations of the Liverpool support.

But with Gotze likely to elude Klopp this summer, a move for another marginalised star may tempt Klopp, with Spain international Isco struggling to establish himself at Real Madrid.

Following the appointment of Zinedine Zidane in January, Isco played 1,182 minutes of football over 22 games, averaging less than an hour per appearance.

This is no marker of the 24-year-old’s quality, however, as Isco is an exceptional creative talent, and his ability to shine on either wing, behind the striker or even deeper in the middle of the park make him an invaluable option at the Bernabeu.

But if he is in search of first-team football this season, the Reds could make a bold move, as Isco’s talent would demand a key role under Klopp.

Klopp has showcased a tendency towards youth in the transfer market so far, and if he is to target more rising stars this summer, a move for Lille winger Sofiane Boufal would be wise.

Signed in January of last year to accomodate for the sales of Florian Thauvin, Dimitri Payet and the eventual departure of Divock Origi to Liverpool, Boufal has taken up a focal role in the Lille attack, despite still only being 22 years old.

In 2015/16, the Moroccan scored 12 goals and registered four assists in 35 appearances for the Ligue 1 outfit, sharing his duties between the left and right flanks.

Blessed with the skill and pace required to beat a man both cutting inside towards the edge of the penalty area or driving to the byline to send in a cross, Boufal could emulate Leicester City‘s Riyad Mahrez if he moved to Merseyside.

When Firmino and Coutinho faded in 2015/16, Liverpool often suffered, and having a player like Boufal—able to inject an X factor into Klopp’s attacking line—would be a considerable lift.

Liverpool’s pursuit of Gotze has raised some eyebrows due to the seemingly luxury nature of the 23-year-old; he would be an excellent addition, in tune with Klopp’s attacking demands, but he would not address a genuine problem area.

As a result, Klopp could look to an in-house option this summer and welcome Lazar Markovic back into his squad following his loan spell with Fenerbahce.

Markovic’s time in the Turkish Super Lig has been far from a success, with the 22-year-old dogged with hamstring injuries throughout, but if Klopp is able to employ his vastly improved medical team to address these problems, he can call upon a hugely talented winger.

Markovic has the pace, unpredictability and off-ball work rate to shine on the right flank for Klopp, with the width he would add to the German’s ranks a welcome alternative to Adam Lallana.

Likely joining up with Klopp’s squad for pre-season, Markovic will be given a chance to impress, and he could save the Reds a significant outlay if he does so.