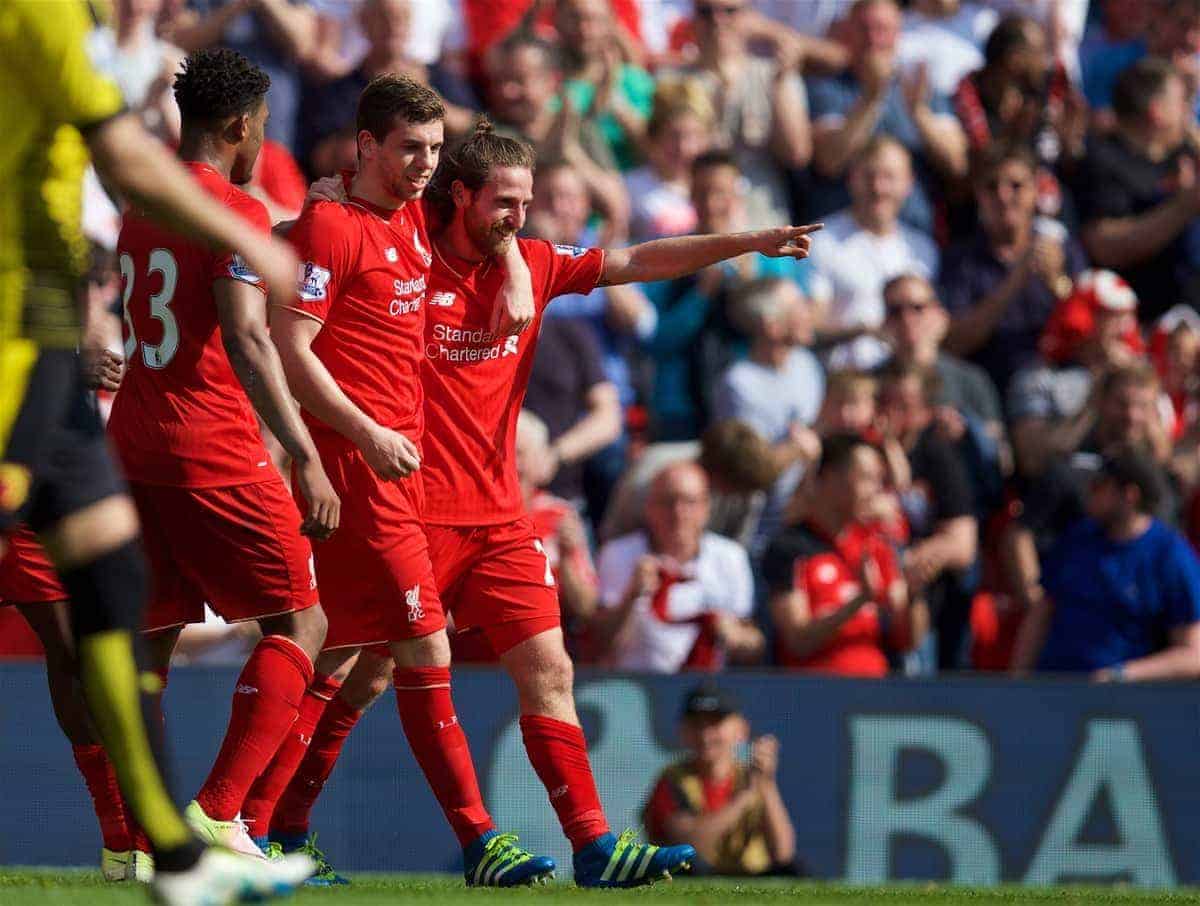 Liverpool kept the good times rolling as they eased to a 2-0 win against Watford, and James Nalton was at Anfield to discuss five talking points.

The visitors threatened briefly on the counter-attack, but a starting lineup which contained just three of the players who started in Thursday night’s 3-0 win over Villarreal in the Europa League was able to pick up an win and another clean sheet.

Goals from Joe Allen and Roberto Firmino were enough to secure the three points, and Jurgen Klopp can now look towards Wednesday night’s clash with Chelsea, taking much from this performance as he prepares to take on last season’s champions.

Here are five talking points from a professional 2-0 win at Anfield.

Benteke Back in the Action Christian Benteke was starting his first league game since January 2 in a much-changed Liverpool lineup.

The Belgian has eight goals in 12 starts so far this season, but has found himself out of favour recently due to a combination of injury, poor form, and the excellence of team-mates Firmino, Divock Origi and Daniel Sturridge.

However, the No. 9 put himself about, holding the ball up well and providing a platform up front from which his side could build.

He missed a couple of chances of his own, forcing a save from Heurelho Gomes when through on goal and heading over the bar from a few yards out late on in the game, but some neat touches to team-mates made sure his afternoon was a fairly pleasing one.

One of these neat touches was a header guided into the path of Joe Allen, leading to the opening goal. He linked up well with the other forward players throughout and set up Philippe Coutinho for a chance in the second half which the Brazilian should have done better with. After the Reds’ 3-0 loss at Vicarage Road earlier in the season, Watford striker Troy Deeney said that his side “bullied” the Liverpool defence, and commented that “Skrtel went off, he didn’t fancy it.”

The Slovakian defender had a torrid time during his 41 minutes on the pitch, but Deeney’s comments appear to have motivated Skrtel, who put in a much more aggressive and commanding performance this time around.

It was his first clean sheet since November against Swansea City, and a number of important blocks and clearances kept Watford at bay on this occasion.

His four aerial duels won was more than any other defender, and he can be happy with his afternoon’s work overall.

Even if a player is in good form, it often takes a goal before the wider football audience really start to take notice.

This has been the case with Allen who, when he’s been called upon, has performed excellently in recent weeks but is yet to convince some that he has a future at the club under Klopp.

Today he put in another one of the performances we’ve seen of late, but he was also able to get his name on the scoresheet for that added recognition.

His forward runs into the box have been a feature of his game under the German manager, and his goal today came from one such run when he was able to stretch to get on the end of Benteke’s knockdown to steer the ball home.

He returned the favour later on in the game when he sent Benteke through on goal, but the striker was unable to provide the finish which would have given Allen a mark in the assist column to add to his goal.

That a back line of Jon Flanagan, Martin Skrtel, Lucas Leiva, and Alberto Moreno can keep a clean sheet against a side who put three past Liverpool in the last meeting between the two sides is testament to the team structure and work ethic under Klopp.

None of the back four were particularly outstanding – in the way that Dejan Lovren and Kolo Toure were on Thursday, for example – but they went about their business in a competent fashion and each player knew their role in the side.

As mentioned, Skrtel was one of the key players in this back line, but established first-teamer Alberto Moreno, and experienced head Lucas Leiva also contributed to the clean sheet.

And while Jon Flanagan might not have had the best of games, this didn’t affect the side’s overall defensive performance.

Chelsea and Managing the Workload This lazy Sunday afternoon in the sun was exactly what Liverpool wanted, and the win was important as it keeps spirits high throughout the squad as they build up to the biggest game of the season.

Coutinho and Firmino shared a shift, and both put in good performances without picking up injuries.

The two other players who started on Thursday – Moreno and Simon Mignolet – came through the 90 minutes unscathed.

Liverpool’s next game is against Chelsea on Wednesday, and the side for this fixture is likely to have more of a first-team feel to it when compared with Klopp’s lineup against Watford, and the one which will start against West Bromwich Albion the Sunday before the Europa League final.

Klopp commented after the game that Liverpool against Chelsea is one of the biggest games in football, and you get the impression that the team he picks on Wednesday will reflect this, with Daniel Sturridge likely to start.