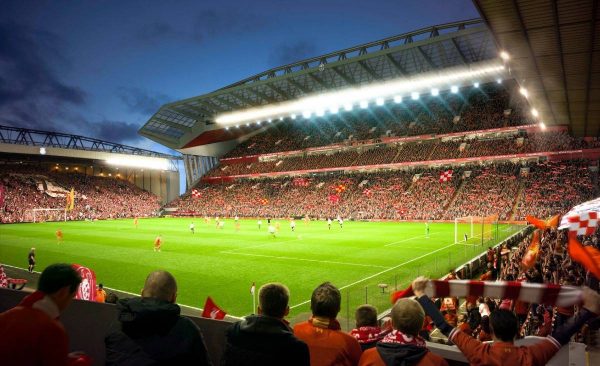 Anfield’s new Main Stand will be complete in August, but changing rooms will be temporary

Liverpool FC have confirmed that the new Main Stand will be ready by the end of August, taking Anfield’s capacity to around 53,800.

Construction on the new stand is now in full flow, with workmen working around the clock to ensure they meet tight deadlines.

It’s almost a fortnight since the final home game of the season, against Chelsea, and the roof of the old Main Stand has now been removed, along with all the seats from the existing stand.

Liverpool have requested that their first game of the season be played away from home again, in order to allow more time for work to be completed.

The stand itself, Liverpool have confirmed will be ready by the end of August, with test events taking place to ensure that everything runs smoothly.

Work will, though, continue through to January 2017 on internal areas such as the changing rooms, referees room, media areas and the players tunnel. There will be temporary changing rooms for the first months of the season.

Liverpool had initially planned to keep the tunnel in the same place, but the latest plans show the tunnel moved to inline with the halfway line.

The news was confirmed by Ian Ayre at the latest supporters committee meeting earlier this month.

At the meeting, the club were asked to provide a breakdown of ticket allocations but said this would not be provided until they had completed its work on the season ticket waiting list.

The new Main Stand will see stage one of Anfield’s overall expansion plans completed, with phase two being the potential expansion of the Anfield Road End – for which the club have outline planning permission and would take the overall capacity to around 58,000. A decision on whether to go ahead with this has not yet been finalised.

Last week, Liverpool confirmed plans to re-install the Shankly Gates on the Centenary/Anfield Road corner, something we explained in April 2014.