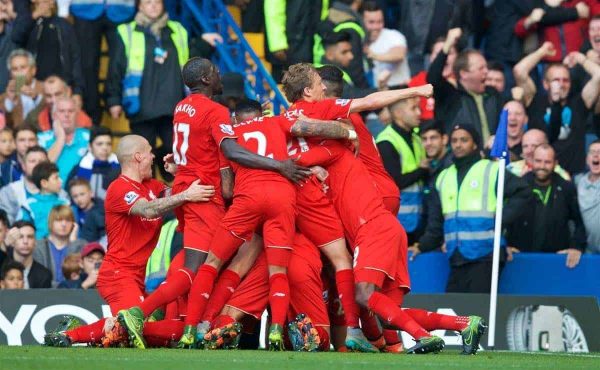 Every Liverpool Player’s Best Moment Of 2015/16

With the 2015/16 season nearing its conclusion, we select the standout moment for every Liverpool player throughout the campaign.

It has been another fascinating year in the club’s history, both on and off the pitch.

The sacking of Brendan Rodgers and arrival of Jurgen Klopp heralded the start of an exciting new era at Anfield, with the German proving to be a fantastic appointment so far.

Liverpool have struggled for consistency in the Premier League, and must improve next season, but they have reached two cup finals, with the Europa League Final against Sevilla now just days away.

Each Reds player has enjoyed at least one moment to remember since August – here is a look at who has done what:

The Belgian has had an inconsistent campaign, but his shot-stopping ability has come to the fore on numerous occasions.

His magnificent save to deny Odion Ighalo was one of the best of the season by any goalkeeper.

Things haven’t gone well for Bogdan at Anfield, but he was still a hero back in September, when his three penalty saves in the shootout against Carlisle United sent Liverpool through to the League Cup fourth round.

Having returned from an impressive loan spell at Aberdeen, Ward has been given a few rare opportunities to shine between the sticks.

Liverpool’s 3-1 defeat at Swansea last month may have seen some terrible individual performances, but the young ‘keeper was excellent, making a number of eye-catching saves.

Clyne has proved to be a brilliant signing from Southampton, playing with great consistency at right-back all season long.

He was particularly outstanding in the Europa League semi-final second-leg against Villarreal, however, producing a perfect all-round display.

Having suffered such a horrendous time of things with injury, Flanagan’s best moment of 2015/16 was simply returning to action after almost two years on the sidelines.

The local lad received a wonderful reception when he took to the field against Stoke City in the League Cup back in January, and he has been dependable ever since.

The young Spaniard may not be the finished article yet, but he has improved under Klopp.

Moreno’s finest moment of the season was quite possibly the fantastic tackle he made on Southampton‘s Sadio Mane, following a lung-busting surge back from the other end of the pitch.

The Australian scored an important equaliser at Exeter City in the FA Cup third round, keeping Liverpool in the competition in the process.

Randall’s debut, in the League Cup against Bournemouth in October, was undoubtedly his high point of the campaign.

The teenager looked a class act prior to a serious knee injury, with a fabulous performance away to Arsenal outlining his enormous potential.

A hilariously bad showing at Exeter was probably Enrique’s standout moment, simply because it was surely the moment Klopp realised the Spaniard had no future at Anfield.

His debut at Exeter would have been a moment he had dreamed about.

The 26-year-old has made giant strides in recent months, and his last-gasp winner against Borussia Dortmund was not only his best moment of 2015/16 to date, but Liverpool’s too.

Things may have gone pear-shaped for Sakho this season, for obvious reasons, but he has produced some colossal performances at times.

A mountainous display away to Man United in the Europa League last-16 was particularly outstanding, with the Frenchman making 12 clearances and six tackles at Old Trafford. Even the commentators praise him!

Seeing Toure score a goal is a rare and wonderful thing, so witnessing the hugely popular Ivorian tuck away a header in the 6-0 mauling of Aston Villa has to be his finest moment of the campaign.

It was his first ever Reds goal, and his celebration was brilliant.

Skrtel looks set to depart Anfield this summer, but despite no longer being good enough, he has still managed to shine now and again.

The Slovakian was excellent in Liverpool’s 4-1 thrashing of Man City at the Etihad in November, capping off a fine individual display with a rocket of a finish late in the day.

Chances have been few and far between for the Portuguese youngster, but he was very impressive away to West Ham in the FA Cup fourth round replay.

He caused mayhem as an auxiliary striker against both Arsenal and Norwich, with Liverpool scoring late in both matches. Other than that, Caulker hasn’t done a thing.

Can has matured into the best midfielder Liverpool have this season, with countless influential displays in the middle of the park.

To return from a potentially season-ending injury against Villarreal in the Europa League semi-final second-leg, and completely run the show, was particularly magnificent, though.

His outrageous assist for Daniel Sturridge against Southampton also deserves a mention.

The captain’s campaign has been ruined by a lack of fitness, and the hope is that his best moment comes next Wednesday, when he lifts the Europa League trophy aloft in Basel!

Liverpool’s longest-serving player has mustered some formidable displays this season, but he was especially good away to West Ham in the FA Cup, in a rare centre-back role.

His use of the word “unlucky” has also been a high point.

Milner has grown in stature by the game for the Reds, adding goals and assists at a surprisingly relentless rate.

His inch-perfect cross to set-up Lovren against Dortmund was his most telling contribution of the season so far, and it outlined his ability to produce big moments at important times.

Liverpool’s cult hero has been superb in 2016, putting in some influential performances and looking gloriously like Andrea Pirlo.

Although often understated and subtle in his brilliance, Allen was the hero against Stoke in January, when his winning penalty in the shootout sent the Reds into the League Cup Final.

The youngster’s season has been wrecked by injury, but he shone against Bordeaux in the Europa League back in September.

The young midfield trio all made their Liverpool debuts this season, and they will cherish those moments forever.

Liverpool’s Player of the Year has once again scored some fantastic goals, proving to be his side’s attacking talisman time and time again.

His wonderful solo goal against United in the Europa League was both unique and important, and it stands out as Coutinho’s best moment.

Like so many Reds players under Klopp, Lallana has improved immeasurably in 2015/16, adding plenty of substance to his game.

It was the 28-year-old’s stoppage time winner in the incredible 5-4 win at Norwich that stands out more than anything, though, with the celebrations almost as memorable as the strike itself.

After a slow start, Firmino has become one of Liverpool’s best players this season.

The Brazilian was mesmeric in the aforementioned 4-1 at City, scoring one and producing a brilliant assist for Coutinho. It was the first time we realised what a huge talent he is.

Things haven’t gone too well for Ibe in the last year or so, but his winning goal away to Stoke in the League Cup semi-final first-leg was an important moment for both him and the team.

An eye-catching finish at home to Exeter comes close, but Ojo’s superb trickery and assist for Sturridge against Stoke just edges it.

The Portuguese man’s future looks set to lie elsewhere, but his well-taken effort in front of the Kop against Exeter – his first ever for the Reds – was a moment to savour.

The highly-rated youngster made his Liverpool bow at Exeter, and looked the part.

Having finally returned from horrible luck with injuries, Sturridge has continued to score at a relentless rate this season.

The 26-year-old’s real moment of glory came against Villarreal, though, with his goal putting Liverpool 2-0 up and on their way to another European final.

His passionate celebration showed exactly what it meant to him.

Such is the fickle nature of football supporters, Origi was being written off by some earlier in the season, which seems crazy now.

The young Belgian has arguably become Klopp’s first-choice striker, when fit, and his hat-trick away to Southampton in the League Cup quarter-final was very much the moment we sat up and took notice. His standout performance though was away to Dortmund.

It has been a hugely disappointing first year on Merseyside for Liverpool’s big-money signing, but it hasn’t been all bad.

10 goals is not the worst return in the world, and his incredible acrobatic effort against Man United at Old Trafford was one of the finest strikes of the season.

Ings was looking a good purchase prior to a cruciate ligament injury suffered in October, and his header against Everton in the Merseyside derby cemented his reputation a possible big-game player for the future.

Liverpool’s youngest ever player scored his first ever senior goal against Exeter in January, helping the Reds get level.