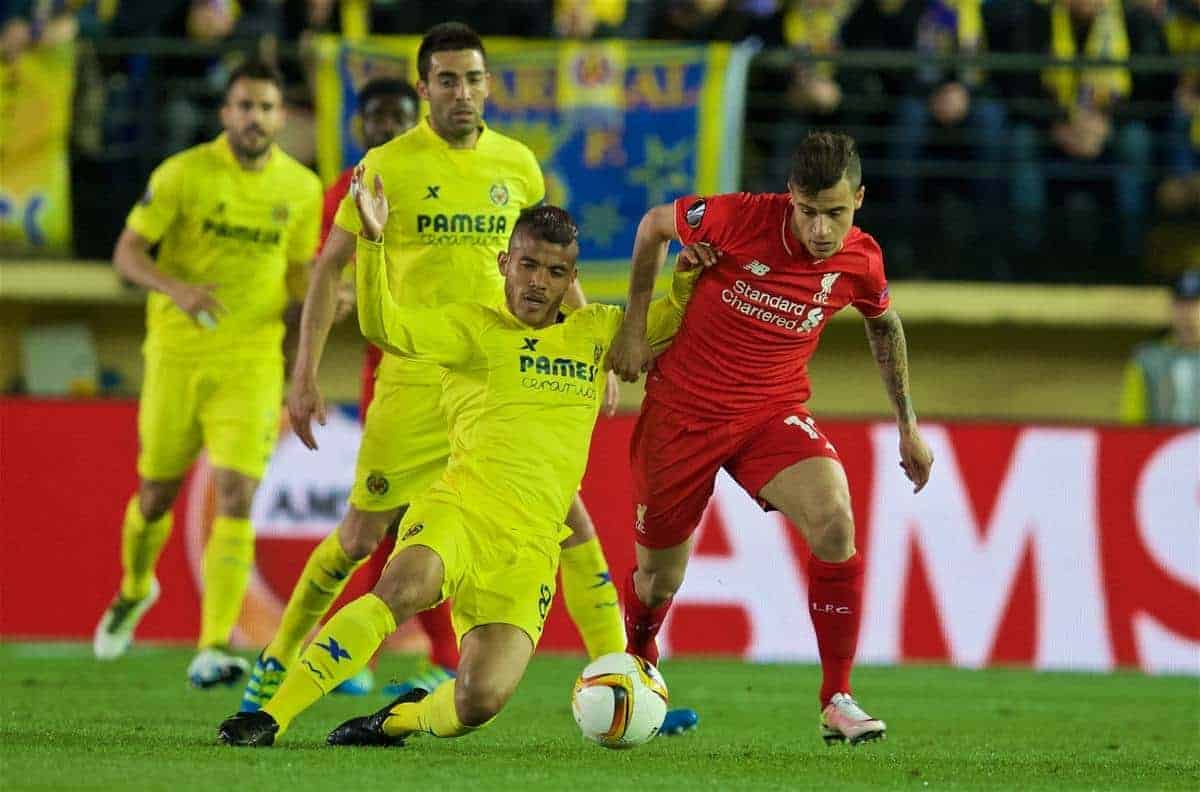 The Reds are all set for their most important match of since the end of 2013/14, with a place in a first European final since 2007 within touching distance.

Jurgen Klopp‘s side warmed up for the game with a poor 3-1 defeat to Swansea City on Sunday, but considering the changes the German made to his team, the result will have no relevance to Thursday’s game.

Adrian Lopez’s last-gasp winner in Spain a week ago has given Villarreal a definite advantage heading into the second-leg, but a ferocious Anfield crowd will await them for what should be a memorable occasion.

Liverpool have produced some of the greatest European nights in history over the years, and another one on Thursday is much-needed, in order to keep their season alive.

Having enjoyed an impressive run of results as winter gradually became spring, Liverpool have suffered a slight dip of late.

They are without a win in three matches in all competitions, although it must be stressed that the dropped points against Newcastle and Swansea in the Premier League saw the Reds weakened significantly, in terms of personnel.

The 1-0 defeat to Villarreal was a disappointing result, though, and Klopp’s tactics felt strangely conservative, considering his preference for “heavy metal” football.

Marcelino’s side are a well-drilled outfit, but they are perfectly beatable. Liverpool missed a trick at El Madrigal, appearing happy with a 0-0 draw, and it ultimately backfired.

Villarreal may have rested players away to Valencia on Sunday evening, but that didn’t stop them from sealing an impressive 2-0 win.

Samuel and Lopez got the goals for the visitors, who have now all but guaranteed their place in next season’s Champions League. Winning the Europa League would ensure that too, of course.

The Yellow Submarine have now won six of their last nine games, and the fact that only Barcelona, Atletico Madrid and Real Madrid are above them in La Liga does suggest they are a force to be reckoned with.

They will be full of confidence as they head to Anfield, and if they can see out what is likely to be a frenetic opening to the game, they will fancy their chances of progressing to a maiden European final.

Although Villarreal are very much a side built on a wonderful team ethic, there was still some undeniable individual class on show last week.

Cedric Bakambu was quiet for much of the night, but the Congo striker’s pace and power on the counter-attack will be vital on Thursday evening.

Roberto Soldado is an intelligent striker, and although his best years are now behind him, his link-up play with Bakambu and experience will be key in a cauldron of noise.

Villarreal’s star man in the first-leg was undoubtedly Denis Suarez, who oozed class from start to finish.

The 22-year-old caused real problems with his creativity, and his pass to Lopez for the game’s only goal was both unselfish and brilliantly subtle in equal measure.

Suarez has the ability to run the show, and Liverpool must stop him from influencing things too much in the final third.

Sergio Asenjo looked impressive in goal, and will hopefully be kept busy by a relentless Reds attack, while captain Bruno is also a key figure.

Klopp has received a major injury boost with the news that Emre Can has a chance of starting Thursday’s season-defining showdown.

The young German has overcome what looked like a season-ending ankle issue, and returned to full training earlier this week. Danny Ings is also training again, following a cruciate ligament injury but he is far from full fitness and not in the European squad now anyway.

Mamadou Sakho is suspended by UEFA following his failed drugs test, while skipper Jordan Henderson and striker Divock Origi are still weeks away from a return.

Daniel Sturridge has been making the headlines, having not been used in the first-leg, and Thursday feels a little like a make-or-break moment in his Liverpool career.

Should Klopp decide not to start the 26-year-old in a game of such magnitude, it seems hard to imagine him having a long-term future at Anfield.

Marcelino has few injury concerns ahead of the game, and his key players will be nicely rested after he made 10 changes at the weekend.

Centre-back Eric Bailly has recovered from a knock picked up in the first-leg, which is a big boost to Villarreal. Klopp admitted he is still deciding on whether or not to start Sturridge:

I was waiting for this question. He could be, 100 per cent, but I’ve made no decision yet about the line-up.

In all these thoughts, Daniel Sturridge is absolutely involved.

The 48-year-old also spoke about patience being the key on Thursday night:

It’s a normal result. In Europe, you can lose away,” Klopp said. “We have thought a lot about our game. We know their strength. Our skills, quality, passion, readiness together with the atmosphere at Anfield, that’s what I’m looking for.

We have to know about the game, not with pressure, only with joy. It’s only playing football. Football is a fair game. If we play our best then we can go to the final. Liverpool are 7/10 favourites to win on the night, which probably looks a good bet, considering there should be plenty of pressure on the Villarreal goal.

When it comes to progressing to the final, Villarreal are the 4/7 favourites, with the Reds 7/5. Lopez’s last-gasp strike made an almighty difference in that respect.

It is one of Liverpool’s most important matches for a number of years, and come Friday morning, we will know a lot more about what this current Liverpool team are made of.