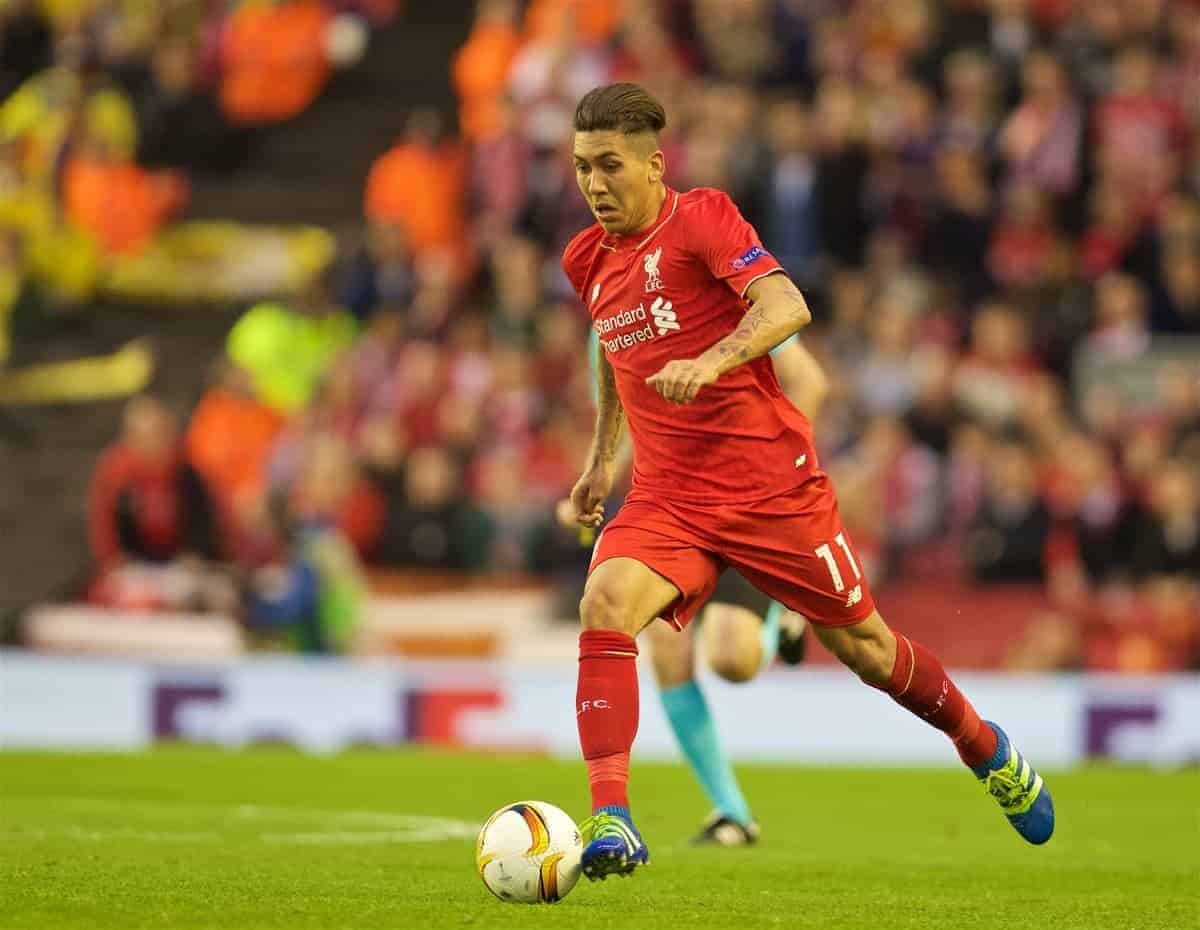 Liverpool’s 3-0 win over Villarreal on Thursday night was driven by a display of all-round brilliance from Brazilian forward Roberto Firmino.

Continuing their remarkable run for Europa League glory, the Reds overturned a one-goal deficit with a comprehensive victory at home to Marcelino’s Villarreal.

An own goal from Bruno Soriano and strikes from Daniel Sturridge and Adam Lallana sealed the win for Jurgen Klopp‘s side, securing a place in the Europa League final, where they will take on reigning champions Sevilla.

The result will give Liverpool confidence as they head to Basel’s St. Jakob-Park on May 18, but it was the way in which they overwhelmed the Yellow Submarine that is most encouraging.

At the heart of this stunning display was summer signing Firmino, who produced a top-level performance.

With his side needing to score at least two, and avoid conceding a costly away goal, Klopp needed to find a balance as he looked to reach his second final in less seven months on Merseyside.

The manager hinted at a full-throttle approach in the buildup to this all-important second leg, and this was confirmed as the Reds released their starting lineup for the night.

Joining Firmino, Sturridge and Lallana in attack was Philippe Coutinho, with Klopp restoring the 4-2-3-1 formation that has proved so effective throughout 2015/16, while Emre Can‘s presence alongside James Milner in midfield added a hardened edge in Liverpool’s engine room.

With thousands of supporters flooding the streets around Anfield Road, welcoming the team bus with flares and chants of “oh when the Reds,” Klopp’s team talk was rendered obsolete.

Swarming over Villarreal from the first whistle, Liverpool executed the heavy-metal football that was promised on Klopp’s arrival at the club in October.

With Can providing a solid base, producing a masterclass in breaking up play and moving the ball forward quickly, Milner, Lallana, Firmino, Coutinho and Sturridge were all free to drive forward.

This saw the Reds level the scores after just seven minutes, and while Villarreal fought back briefly, this set the tone for the night, with progress to the final a formality from kickoff.

Central to this was Firmino, whose understated brilliance fuelled Klopp’s game plan.

Taking up his regular position as Liverpool’s No. 10, Firmino played one of the most important roles in Klopp’s 4-2-3-1, with the need for balance catered for by his tactical flexibility.

Initially, Firmino found himself at the forefront of the Reds’ pressing game, applying pressure on an increasingly shaky Villarreal defence.

Whenever Villarreal found themselves in possession at the back not one, but two or three Liverpool players would be straight at them, closing down angles and looking to nip the ball in dangerous areas.

This proved particularly unsettling for goalkeeper Alphonse Areola, who endured a shaky first 45 marred with errors and misplaced passes.

A hallmark of Firmino’s game is this work rate in the final third, which he proved so dutifully in the first leg at El Madrigal.

Despite the persistent, confused criticism of BT Sport commentator Owen Hargreaves, Firmino was near-faultless in Villarreal, operating as a heavy-pressing, deep-lying forward in a withdrawn 4-3-3 formation.

But while this was once again prevalent at Anfield, with Liverpool needing a victory on home soil Firmino was let off the shackles. While at El Madrigal he pressed continuously with payoff, Firmino’s off-ball work was complemented by transition into the final third at home, with the presence of Sturridge’s focal role giving the Reds an edge.

Sturridge’s role as Klopp’s No. 9 allowed Firmino to overlap and to float into dangerous positions, as seen as he squared the ball for the striker to latch onto on seven minutes—with Bruno there to turn the ball in.

Just after the hour mark, Firmino drifted to the right and joined Lallana in a forward charge, with his persistence winning a loose ball before playing Sturridge in to hammer home.

Then holding off Mateo Musacchio as he surged into the box from the left in the closing stages, Firmino kept his head up and laid the ball into the path of Sturridge, whose rebounded effort was converted by a well-placed Lallana.

Firmino played a key role in all three goals as Liverpool romped to the Europa League final, with a performance of equal parts of rigour and finesse underlining his status as an elite talent.

Though he has long stood as a contender for Liverpool’s Player of the Year award, Firmino’s tendency to shrink into the periphery on big occasions has threatened to undermine this key status.

This was not least apparent in February’s League Cup final defeat to Manchester City, failing to link up with Milner, Coutinho or Sturridge in a similar setup to Thursday night.

After that game, Klopp insisted that “only silly idiots stay on the floor and wait for the next defeat,” and with Liverpool responding just months later by reaching their second final of the season, the German had clearly hammered home the message.

From one of the worst performers in the League Cup final to Liverpool’s inspiration on their route to the Europa League final, Firmino’s continued development under Klopp reached a new milestone.

At Anfield on Thursday night, Firmino looked every bit the £29 million player.

Combining the impudence and creativity ability of Coutinho, the dynamism and boundless work rate of Lallana and the predatory instinct of Sturridge, Firmino warrants that central role in Klopp’s 4-2-3-1.

And it all looked so effortless, as his stunning piece of skill to flummox the abject Roberto Soldado in the second half highlighted.

Every Liverpool player deserves immense credit for their achievements in the Europa League in 2015/16, but while he avoids the headlines it is Firmino who is the most distinguished.