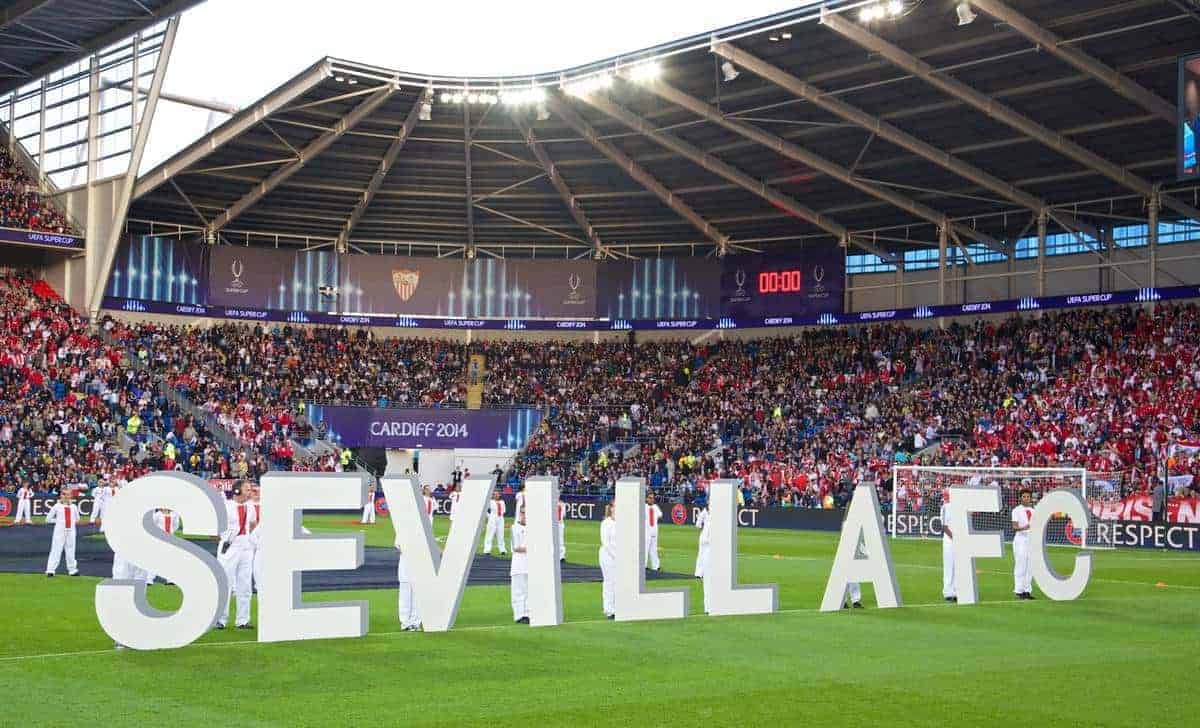 Liverpool take on La Liga side Sevilla in the Europa League final on Wednesday night, and can expect a tough challenge.

The Reds travel to Basel’s St. Jakob-Park this week to take on Sevilla, with the focus turning to sealing Europa League glory after a muted domestic campaign.

Jurgen Klopp led his side to victories over Man United, Borussia Dortmund and Villarreal among others along the way to this showpiece clash, with Liverpool now just one win away from their first major European trophy since 2005.

A win would also secure passage to the Champions League group stage for 2016/17, and after finishing eighth in the Premier League, this is Klopp’s only hope of European competition.

So who are Sevilla, how do they play and how can Liverpool plot for victory in Switzerland?

Unai Emery joined Sevilla in 2013, after a long-spanning playing career that took in spells with Real Sociedad, Toledo, Racing Ferrol, Leganes and Lorca Deportiva, before an immediate switch into management.

Moving from Lorca to Almeria, then onto Valencia, Spartak Moscow and now Sevilla, Emery has cut his teeth at some top European clubs, and now brings a refined edge to the Ramon Sanchez Pizjuan.

Described as a “dawn-til-dusk workaholic,” Emery boasts a similar managerial enthusiasm to his opposite number on Wednesday night, while taking a studious approach to tactical work.

Dealing with annual outgoings, working with the transfer genius of sporting director Monchi, Emery is able to mould a cohesive unit season by season, typically within the same framework.

This season, Emery has largely utilised a 4-2-3-1 formation, again much like Klopp, fielding a solid defensive base to allow his attacking talents to flourish.

With two robust centre-backs, a pair of well-tuned, alternating full-backs and a solid, defensive-midfield tandem, Emery’s skilful wide players and dynamic, ever-moving striker can feed off the creativity of a dictating No. 10.

Employing a possession-based game, Emery looks for his midfielders to keep the ball and prompt attacking moves with patience, while off the ball each player’s duty is drilled into them, with the manager handing them a USB with instructions on how to counter their direct opposition.

Emery’s Sevilla are far from a dull side, however, scoring the joint-fifth most goals in La Liga this season, with enough flair in attack to stun opposing defences.

In many ways, Emery is the type of manager Fenway Sports Group may have targeted had they not have been successful in appointing Klopp back in October, though as the Liga table suggests, his third year has not been a vintage one. After finishing the 2014/15 campaign in fifth place in La Liga, and securing the Europa League title for the second consecutive time, Emery can consider his second season with Sevilla a success.

Fuelled by goal machine Carlos Bacca, who scored 28 in all competitions, Sevilla were locked in a fierce battle for a third-placed Liga finish with Atletico Madrid and Valencia.

Sevilla’s European exploits proved costly in that race, however, but defeating Dnipro 3-2 in the Europa League final at Poland’s National Stadium in Warsaw provided the perfect tonic.

This season, contending with the demands of the Champions League, having qualified due to their Europa League success, Sevilla have struggled on the domestic stage.

Beginning the campaign with a European Supercup defeat to Barcelona, Emery’s side registered just three wins in their first 10 Liga games, while back-to-back losses to Man City in the Champions League group stage effectively consigned Los Rojiblancos to an immediate return to Europe’s second tier.

Dropping out of the Champions League did improve Sevilla fortunes, however, losing just once in 23 games between the end of November and the end of February.

But as the Europa League reconvened, this poor form returned, with Sevilla’s longest unbeaten run between the beginning of March and Wednesday night’s final being just five games.

They have, however, reached the final of the Copa del Rey, where they will take on Barcelona at the Vicente Calderon on May 22, though that this and their clash with Liverpool come away from the Ramon Sanchez Pizjuan could come as a major blow.

In La Liga this season, Sevilla failed to win once in 19 away outings, including 10 defeats, ensuring they have the 19th worst away record in the Spanish top flight.

By comparison, Liverpool have the sixth best away record in the Premier League, and this may lend Klopp an advantage as he plots for victory.

Key Men & Where the Game Will be Won Sevilla’s measly seventh-placed finish in La Liga this season belies a squad packed with talent, and it is unlikely to factor into Emery’s preparation for Wednesday night’s final.

With Monchi showcasing his transfer-market nous over the years, Emery has been provided with a squad full of match-winning stars.

Yevhen Konoplyanka and Kevin Gameiro lead Sevilla in terms of appearances this season, both having featured on 50 occasions, and their presence is crucial.

Liverpool supporters will be familiar with Konoplyanka following the Reds’ failed bid to sign the Ukrainian from Dnipro in 2014, and while this time last year the 26-year-old expressed his regret at having not made the move, he joined instead Sevilla on a free transfer last summer.

Konoplyanka’s pace, quick feet and ability to cut inside to power shots at goal make him a key threat on Sevilla’s left wing, dovetailing brilliantly with Sevilla’s No. 9, Gameiro.

Gameiro has been linked with a summer move to Barcelona, and having scored 28 goals this season, filling the void left by Bacca, it is easy to see why.

The Frenchman is a nippy, off-shoulder striker, with a real finisher’s instinct, and Klopp’s defenders will need to be on their toes to keep him at bay in Basel.

Aside from this attacking duo, former Stoke City midfielder Steven N’Zonzi and Poland international Grzegorz Krychowiak proved Emery with his solid base, with Ever Banega pulling the strings just ahead.

To secure victory on Wednesday night, Liverpool will need to starve this trio of time on the ball, not allowing them to employ Emery’s patient buildup play—and this is where the likes of Roberto Firmino and Adam Lallana will be crucial.

Firmino may be called upon to perform a key role in attack, too, with Sevilla’s central defenders, Timothee Kolodziejczak and Adil Rami arguably their weak point this season.

Kolodziejczak’s transition into the role of first-choice centre-back has not been without its stutters, and any weakness shown by the Frenchman should be capitalised on.

Breach the robust shield of Krychowiak and N’Zonzi, and Firmino, Philippe Coutinho and Daniel Sturridge can combine to swarm through Sevilla’s weak defensive core.

Though don’t count against Emery, and his meticulous planning—as Sevilla will not be easy pickings.