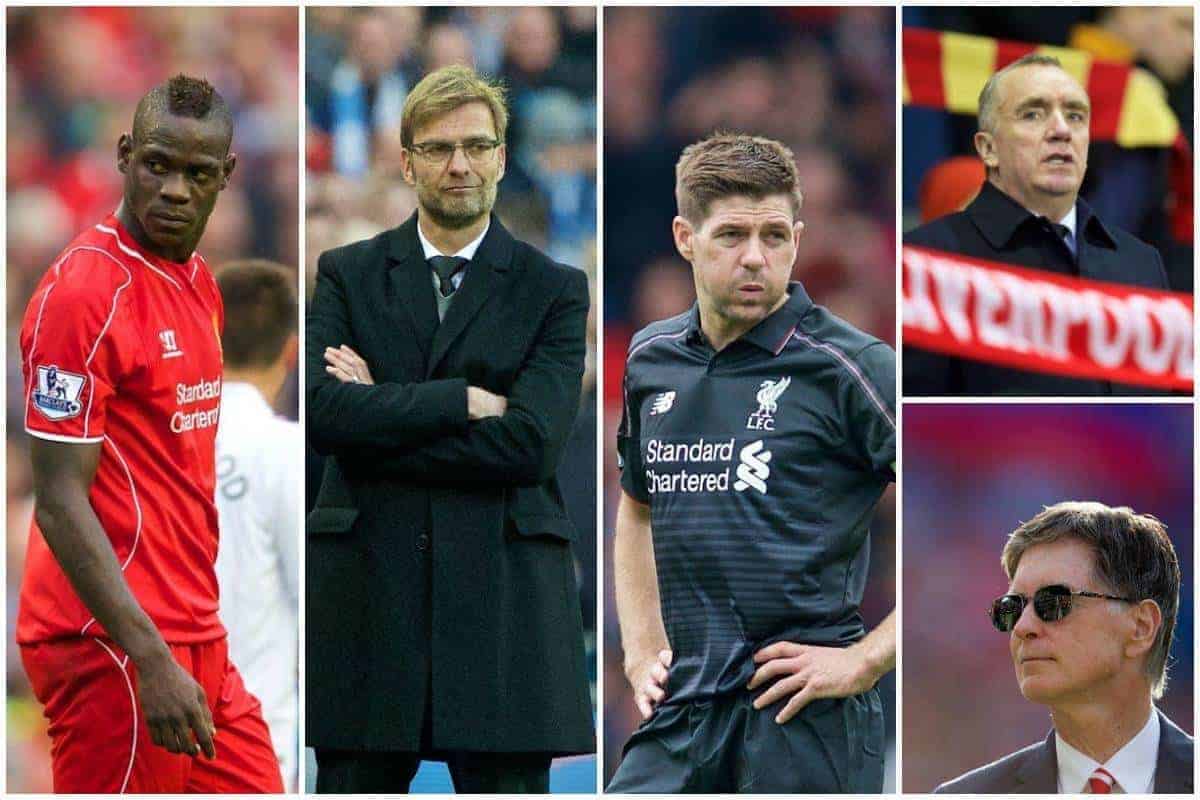 We ask a host of questions about the future of Liverpool FC, on and off the field, for both the short term and the long term.

In a constantly evolving modern footballing landscape, supporters are hungry for information—particularly following an upwardly mobile club such as Liverpool.

Since Fenway Sports Group’s takeover in 2011, the Reds have seen plenty of change both on and off the pitch, but there remain plenty of questions about the club’s future.

Here we ask 10 questions about Liverpool’s short- and long-term future, kicking off with the prospect of selling forgotten striker Mario Balotelli.

While Jurgen Klopp has already been busy remoulding his squad for the 2016/17 campaign, with more incomings and outgoings expected, little progress has been made on the future of Balotelli.

The Italian striker spent the 2015/16 season on loan with AC Milan, but the Serie A outfit dismissed the opportunity to sign him on a permanent deal.

This is something that has continued with a number of clubs linked with the 25-year-old, including Turkish side Besiktas—who confirmed in mid-June that they are “not interested.”

Balotelli’s arrival on Merseyside was hailed as a last chance for redemption, and this summer Liverpool may struggle to find a buyer.

Who Will Be Liverpool’s No. 1 Goalkeeper? The signing of German goalkeeper Loris Karius from Mainz this summer has clouded the immediate future of 2015/16’s first-choice option, Simon Mignolet.

Arriving in a deal worth £4.7 million, Karius took up the No. 1 shirt, and immediately declared his intention to usurp Mignolet as Klopp’s regular custodian.

Mignolet will miss much of pre-season due to his exploits with Belgium at Euro 2016, leaving Karius with the opportunity to impose himself on Klopp’s plans for the 2016/17 campaign.

But it still remains to be seen whether the 22-year-old will play backup for his first season.

Which Attacker is Sadio Mane Set to Replace? Liverpool’s big-money move to sign Sadio Mane from Southampton prompted debate over where the forward fits into Klopp’s first-team plans.

This raises the question as to which of Klopp’s regular starting options he will replace, and with Philippe Coutinho, Roberto Firmino and Daniel Sturridge firmly established in their respective roles, it currently looks likely to be Adam Lallana who is culled.

When Will Main Stand Naming Rights Be Announced?

Redevelopment work on Liverpool’s home stadium has continued throughout the summer, with the Main Stand, interior facilities and the pitch undergoing a major overhaul.

It was reported in February that the club were discussing a £90 million deal with Far East investors over naming rights for the new Main Stand, but with the 2016/17 campaign fast approaching, this is yet to transpire.

Liverpool are likely banking on a significant investment to offset the cost of redeveloping Anfield, but it is unclear when supporters will hear of any movement.

Do Liverpool Have Enough Ambition in the Transfer Market?

The signing of Mane from Southampton, Liverpool’s fifth acquisition from St. Mary’s in recent year, drew rumbles of discontent from sections of the Merseyside support.

This is magnified given reports of Manchester United’s likely signing of Borussia Dortmund’s world-class forward Henrikh Mkhitaryan for a similar fee to the £30 million that secured Mane’s arrival.

So do Liverpool have enough ambition in the transfer market, or are they operating at the right level at this stage?

Will Steven Gerrard Return in a Coaching Role?

“I have had a chat with Klopp,” Steven Gerrard said in January, “I haven’t had an offer as such, but the club have let me know they are keen for me to come back.”

Since the talismanic midfielder left for LA Galaxy at the end of the 2014/15 campaign, Gerrard has been linked with a return to Liverpool—briefly as a player, but more realistically as a coach.

With Gerrard recently confirming his desire to return to Merseyside following the new MLS season, whether Klopp will find a role for him in his new-look backroom is still up for debate.

Who Will Take Over From Ian Ayre?

Current Liverpool CEO Ian Ayre is set to leave the club on the expiry of his contract in the summer of 2017, leaving FSG with a major position to fill beyond that stage.

Since his promotion to the role in 2014, Ayre has been central to discussions involving both commercial ventures and investment in on-field personnel, with the modern footballing CEO a key cog.

Liverpool are yet to announce a replacement for Ayre, and it could be that Klopp has an influence on FSG’s next appointment.

Will Liverpool Reshuffle On Ayre’s Departure? Ayre currently heads Liverpool’s transfer committee alongside the influential Klopp, but his departure could prompt a change in approach.

Klopp’s time at Borussia Dortmund saw the 49-year-old work alongside Michael Zorc, the Bundesliga side’s sporting director, and Liverpool could look to follow suit and appoint a figurehead.

Perhaps most attractive is the prospect of securing former Sevilla sporting director Monchi, whose work with the La Liga side helped spur their three consecutive Europa League titles.

Will “Phase Two” of the Anfield Redevelopment Take Place? FSG have previously stated that they will wait until current redevelopment work on Anfield’s Main Stand before they decide whether to push forward with their ambitious “phase two”.

Based on a demand for tickets, the club could look to expand the Anfield Road end, potentially adding around 5,000 seats to reach a capacity close to 59,000.

This would make Anfield the third-biggest stadium in England, but it is likely to take careful deliberation before any decision is made—particularly given potential financial ramifications.

In the middle of June, it was reported that a Chinese state-backed group were looking to buy Liverpool Football Club from FSG, in a deal worth £700 million.

Owners John W. Henry and Tom Werner have previously underlined their intention to hold onto the club, and the Liverpool Echo reiterated this following reports of this potential takeover, saying FSG “have no intention of selling the club in the near future.”

It may be, however, that Henry and Werner look to capitalise on their investment on the completion of their lucrative Anfield redevelopment.