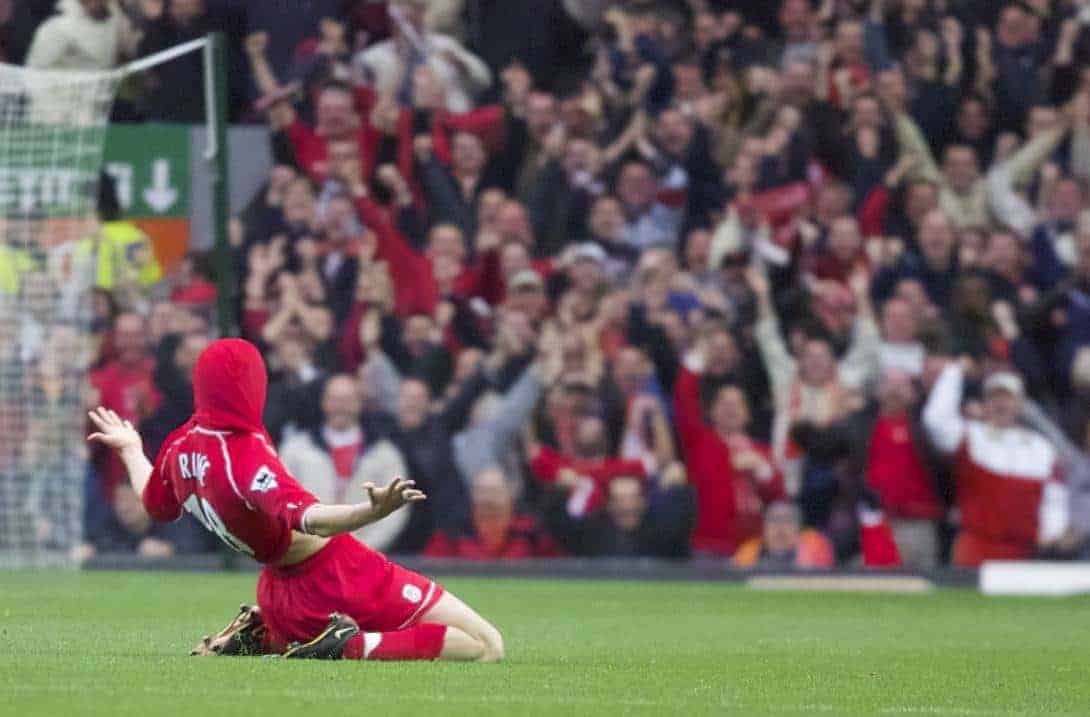 Following news of John Arne Riise’s retirement from football on Monday, we select the left-back’s 10 best Liverpool goals – with some proper blockbusters among them.

The Norwegian’s career has come to an end, with the 35-year-old plying his trade in some of Europe’s top leagues, and becoming Norway’s record appearance maker with 110 caps, over the last two decades.

Riise enjoyed seven excellent years at Liverpool, winning the 2005 Champions League and 2006 FA Cup during his time with the Reds. He played 348 times for the club, and scored 31 goals.

The left-back was renowned for his hammer of a left foot, and he gained a reputation for scoring some truly spectacular efforts over the years.

We’ve had a think, and believe these were Riise’s top 10 goals in a Liverpool shirt – do you agree? Liverpool’s rivalry with Chelsea was at its most intense in the mid 2000s, with constant matches between the pair taking place, in various competitions.

The two sides faced each other at Old Trafford in 2006, in the FA Cup semi-finals, and Riise played an influential role in proceedings.

The Norwegian curled an inch-perfect free-kick past Carlo Cudicini to give Rafa Benitez’s men a first-half lead, and the Reds went on to win 2-1.

Riise was a key man throughout Liverpool’s remarkable march to Champions League glory in 2005 – none more so than against Bayer Leverkusen in the last-16.

With Luis Garcia having already given the Reds the lead in the first-leg at Anfield, Riise then found the net with another precise free-kick.

The left-back was famed for the power he got in his shots, but both this goal and the aforementioned Chelsea strike were proof that he could caress the ball too. Liverpool annihilated Birmingham City 7-0 in the FA Cup quarter-finals back in 2006, and Riise scored the goal of the night at St Andrew’s.

He thundered a trademark strike past Maik Taylor from 25 yards to make it 5-0, earning applause from some of the home supporters. Riise may have scored more emphatic, eye-catching goals for the Reds, but his first ever Premier League strike, in September 2001, was special in its own right.

Then aged just 20, he scored a vital effort in the Merseyside derby away to Everton, making it 3-1 on the counter-attack, having weaved past a couple of challenges.

It immediately made him a hero on Merseyside.

Benitez’s Liverpool were one of the most feared teams in Europe in the late 2000s, and they reached the Champions League final in 2007.

In the quarter-final first-leg against Dutch giants PSV Eindhoven, Riise’s stunning 30-yard half-volley put the Reds 2-0 up, in their eventual 3-0 win.

There is an obvious one that tops it, but few Riise shots have ever been struck as hard as the one he rifled into the top corner against West Brom in 2005.

The marauding full-back had already scored earlier in the game – Liverpool cruised to a 5-0 win at the Hawthorns – and when the ball fell invitingly to him late in the day, he unleashed an unstoppable strike.

Despite scoring some exceptional goals down the years, Riise actually very rarely scored one in front of the Kop.

He bucked the trend in a Premier League game against Tottenham in 2006, however, in a moment that summed up his qualities as a left-back.

Breaking away at pace, the Norwegian let fly from all of 35 yards, and his stunning left-footed shot nestled into the right-hand corner of the Kop net. Riise had plenty of joy against Chelsea throughout his Reds career, and he got Liverpool off to an absolute flier in the 2005 League Cup final.

Not even a minute had been played when Fernando Morientes found the on-rushing left-back with a pinpoint cross, and he fired a wonderful volley past Petr Cech. Another game against Chelsea, another Riise beauty.

The Reds and Blues faced-off in the 2006 Community Shield, and once again, an early stunner from Liverpool’s left-back opened the scoring.

Riise ran two-thirds of the length of the pitch, before chancing his arm from distance. It flew past Cudicini before he knew what had hit him.

This just has to be number one, doesn’t it?

There have been some wonderful goals scored in clashes between Liverpool and Man United throughout history, but this Riise one is right up there.

With the Reds already leading through a Michael Owen goal, back in November 2001, Didi Hamann teed-up Riise from a free-kick, and he leathered a shot that cannoned off the underside of the crossbar and into the net.

Anfield erupted, and although Riise would go on to play for Liverpool for another seven years, he would never score a better goal for the club.