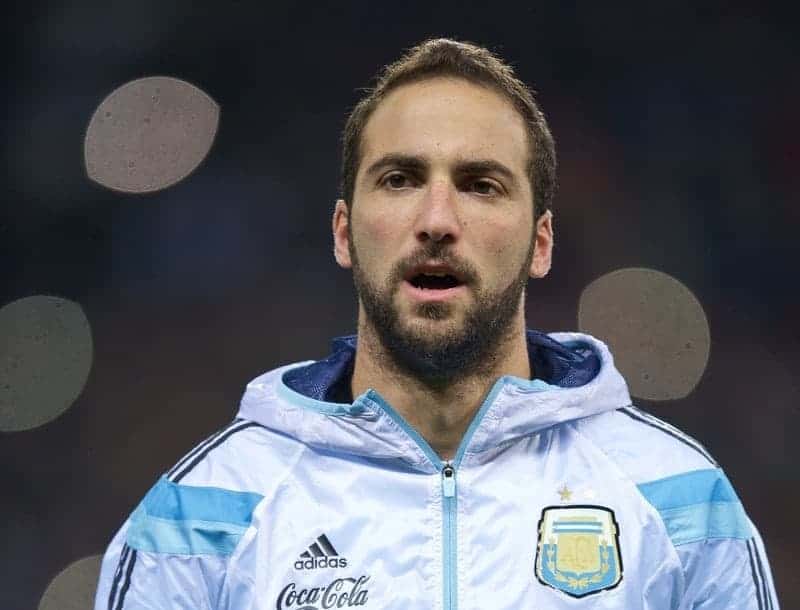 Liverpool boss Jurgen Klopp has been pictured with the agent and brother of Gonzalo Higuain at Argentina’s Copa America clash against Chile in California on Monday night.

The 28-year-old Napoli forward has been tenuously linked with a move to Liverpool in the last week, but Klopp’s sighting alongside Nicolas Higuain – the player’s brother and agent – will add fuel to such reports.

Indeed, prior to Klopp’s sighting at Levi’s Stadium in Santa Clara, beIN Sports USA had casually dropped in a claim that a deal for Higuain was due to be completed “very soon” in an article about Mexican forward Hector Herrera heading to Napoli to replace Higuain.

“The deal should be complete within two weeks time, pending Napoli’s sale of Gonzalo Higuain to Liverpool which should go through very soon,” they wrote.

Chap to right of Klopp at Arg game tonight did indeed appear to be Gonzalo Higuain's brother and agent Nicolas pic.twitter.com/MFJ3A0a2EA

If this is true, it would certainly come as a major surprise, with no British media having credibly reported any interest in the player – who scored an incredible 36 goals for Napoli last season, breaking Serie A’s record.

Liverpool’s interest in a 28-year-old, who wouldn’t come cheap, would be a huge surprise too, and be a major change in FSG’s strategy.

It would also be odd given that the Reds already have a plethora of forward options with Daniel Sturridge, Divock Origi, Danny Ings, Roberto Firmino, plus unwanted Christian Benteke and Mario Balotelli.

Back in February Klopp had said he doesn’t need a new forward this summer, saying: “We have enough strikers – five with Roberto (Firmino) – but not too many wingers, just a few young ones with great potential.”

Argentina won last night’s match 2-1 with Angel Di Maria and Ever Banega scoring their goals. Higuain was subbed in the 73rd minute to be replaced by Sergio Aguero, Klopp left soon after.

The Guardian described Higuain’s performance as: “A great shift for Gonzalo, leading the line upfront.”

Of course, the most likely scenario here is that Klopp was merely attending the game while in California ahead of the club’s pre-season tour. The Reds play at the Levi’s Stadium against AC Milan and will be based in nearby Palo Alto, training at Stanford university.

As ever, time will tell. Just don’t get too excited yet.