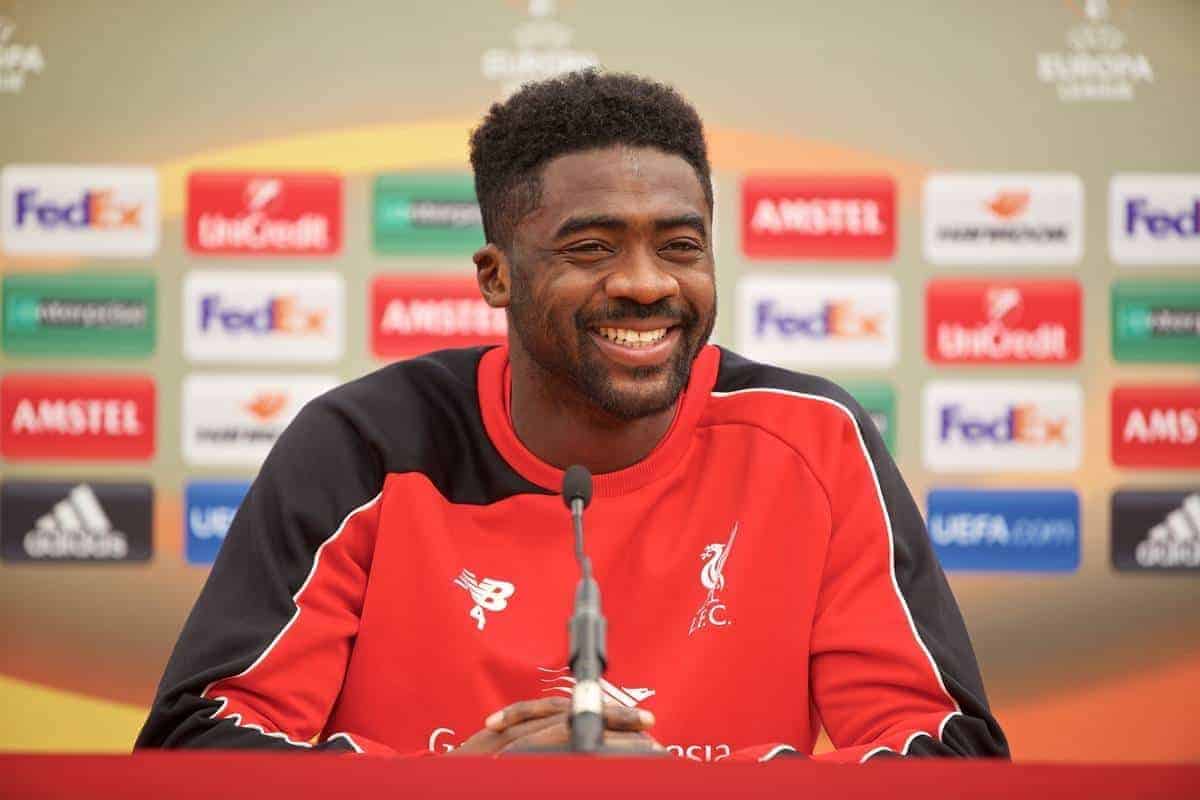 As Kolo Toure’s time at Anfield comes to an end, we take a look back at some of his most memorable moments in a Liverpool shirt.

Liverpool have officially announced that Toure will leave the club this summer, with the 35-year-old to be released upon the expiry of his contract.

It brings an end to a three year stay in L4 for the infectious Ivorian, who has universally won the hearts of Reds fans during his time at the club, becoming a real cult hero among Kopites.

A model professional and likeable figure, who worked hard, was a reliable team player and played with a smile on his face, we pay homage to the departing centre-back by picking five of his memorable moments in a red shirt.

Rampaging the Referee at Fulham

Toure leaves Anfield having given Kopites some great moments to look back on, but this from 2013/14 is arguably the funniest for sheer comedy value.

On a freezing cold night at Fulham’s Craven Cottage, the ex-Arsenal defender warmed up the travelling Kopites and home support in the dramatic 3-2 win by sparking hysterics from all watching in the ground and around the globe.

Running back to his defensive position as the home side took a quick free kick, Toure, like a wrecking ball, ploughed straight into referee Phil Dowd as the pair crossed paths, sending the tubby official flying and almost into the River Thames.

Toure then gave a brutal showing of his warrior-like ruthless streak and no-nonsense approach, not even acknowledging what had just happened and instead proceeding to sprint back to his position to make sure he was in place to do his job for the team while Dowd was left in a heap.

An own-goal enough to give you nightmares may also have been scored that night by Toure, but it was thankfully over-shadowed by three points and his total wipe-out of the referee. Featuring at the heart of defence for Rodgers’ much-changed team in the Santiago Bernabeu, Toure rolled back the years with an outstanding defensive display against Carlo Ancelotti’s Galacticos.

Using every ounce of his vast top-level experience, he kept the likes of Cristiano Ronaldo, James Rodriguez, Gareth Bale and Isco at bay all evening in a man-of-the-match performance, chucking his body on the line time and again as Liverpool defended wholeheartedly.

Though eventually slipping to a 1-0 loss, Toure delighted on the night with his sheer desire and passion to fight until the last, and also with some brilliant play from the back, including one unforgettable marauding run up the left-wing to spring a rare foray forward.

Though a forgettable night for the Reds and Rodgers in particular, it was certainly a memorable one for Toure.

The ’Salmon Tackle’ vs. Stoke

For all the skill, flair and technical brilliance that fans love, nothing wins supporters’ hearts more than seeing their team display sheer passion, desire and a will to win in the sacred shirt.

In Liverpool’s League Cup semi-final first-leg win over Stoke, Toure displayed as such perfectly and in doing so, produced arguably the moment that endeared him to the fans’ hearts once and for all.

At the heart of the back-line, he turned in a typically committed defensive display, but there was one moment that encapsulated his performance in the hard fought 1-0 win.

With the Reds exposed as Stoke pushed for an equaliser, Toure resorted to diving head first like a fish to chuck his body in the way of Xherdan Shaqiri’s cross, making a priceless block in the six-yard box.

Later dubbed the “Salmon tackle”, Toure declared the unorthodox lunge his gift to football and that he did it to show Klopp how much he wanted to stay at Anfield – before joking the Reds may have to fight off Real Madrid to keep him such was the class of his performance.

The plan didn’t quite work out as he hoped but his iconic piece of defending will certainly live long in the memory.

The Reds arrived in the Midlands licking their wounds after an FA Cup exit at the hands of West Ham, but bounced back in stunning fashion with a 6-0 thrashing of Villa.

Scoring six goals without reply in any game away from home will always be an occasion to remember, but this was extra special, as Toure netted his long-awaited first goal for the Reds to cap off a brilliant afternoon.

Already five goals to the good, an out-swinging corner from Jordan Henderson was met by a powerful header from the experienced defender that flew straight into the net, sparking scenes of joy in the stands and on the pitch as Toure broke his duck.

Having not scored since moving to Merseyside, it was clear he had no idea how to celebrate, running around aimlessly before spontaneously sliding to the ground as teammates rushed after him in front of the travelling Kop, who belted out his song.

It was a moment of sheer delight for Toure and one that further cemented his place as a Kop cult hero. An extremely likeable character, Toure will be remembered as much for his infectious personality off the pitch as that for his work on it at Anfield.

And none more so away from the field of play, than for the numerous hilarious videos of the former No.4 singing his own terrace chant, that followed him to Merseyside from Manchester after his arrival in summer 2013.

The first coming in a Liverpool FC production in conjunction with kit manufacturer Warrior, there’s something simply magical about Toure singing his own song wrongly while attempting to dance, before then being serenaded in the middle of his support cast.

He did so again in an improved solo performance at the 2014/15 kit launch, but the video at the end of that season of the whole squad performing the song and dance moves during the post-season trip to Dubai is the best of them all.

The videos sum up Toure as a person – a happy man with a great personality who made an impact on teammates, fans, the club and on the pitch, where he gave his best during an enjoyable three years.