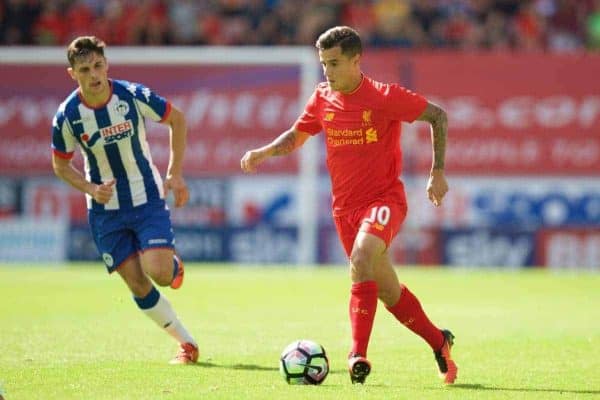 Liverpool beat Wigan Athletic 2-0 in their third pre-season outing on Sunday afternoon, in a game that provided a number of positives for Jurgen Klopp.

Klopp’s side recorded a third straight victory as they continued their positive beginning to the extensive pre-season schedule.

Sharp second-half finishes from Danny Ings and 16-year-old Ben Woodburn, who both netted their second goals of the friendly games, handed the Reds victory against Gary Caldwell’s men.

It was another productive work-out for Klopp’s side, who dominated proceeding to start to finish at a sun-drenched DW Stadium, and the Liverpool boss can be pleased with the efforts and quality from his side overall.

Here are the talking points from the friendly win.

Having missed the Fleetwood victory after only two days of training, Coutinho made his much anticipated return at the DW Stadium.

The Brazilian took no time in reminding all watching of his quality, producing an extremely promising first 45 minutes as he resumed his role on the left of the Reds’ attack.

Operating alongside Roberto Firmino, who lead the line, and Sadio Mane, playing from the right, Coutinho looked impressively sharp – just as Klopp said pre-match that he had been in training – and he twice came close to opening the scoring in the first-half.

Coutinho first saw a wonderfully disguised, cross-goal free-kick cannon back of the cross-bar, before then roasting his marker when one-against-one and hitting the inside of the post with a left-foot strike.

The Brazilian magician showed some of his trade-mark jinks and faints to breeze past opposing players as he enjoyed finding his way back into the swing of things, and his class was evident throughout despite some rustiness with over-hit passes at times.

It’s all about getting Coutinho fit and ready to fire for the real thing, and he looked like he’s up for another big season.

Pre-season is crucial for bedding in new arrivals and settling them into new surroundings, and Matip has certainly taken to his like a duck to water.

The imposing Cameroonian turned in another composed outing at the heart of defence alongside both Dejan Lovren and Tiago Ilori, helpeding the Reds to a confidence boosting third clean sheet, earning Klopp’s praise who assessed: “Joel gets better and better.”

Though up against Championship opposition, Matip oozed class at the back, with his reading of the game snuffing out developing danger on a number of occasions and his physicality in the box also proving a useful and much needed tool.

Perhaps most impressive was his composure in possession and his ability to start play from the back – the former Schalke man turned defence into attack with a crisp pass or dribble out numerous times in the second-half to set the Reds on their way.

Though part and parcel of pre-season, that Matip limped off before the end with his recurring ankle issue is a slight concern, and with other injuries and Tiago Ilori’s Olympics involvement leaving Liverpool short, Klopp needs efficient action in signing a new centre-back.

With Klopp starting Coutinho, Mane and Firmino as an eye-catching attacking set-up at the DW Stadium, focus was firmly on the trio to see how they would link up.

Klopp highlighted pre-match that it is important that the trio can play together, and they showed glimpses of a potential understanding developing in the first piece of action they have enjoyed as Liverpool’s offensive set-up.

The trio rotated well against Caldwell’s side, with Mane looking to break in behind Firmino and the Wigan defence as Coutinho drove inside from the left, looking for the pass to unlock the home side and release his partners in on goal.

Meanwhile, Firmino and Mane, who linked well against Tranmere and Fleetwood, enjoyed some nice exchanges down the right, where both managed to get in between Wigan’s centre- and left-back before creating with crosses and cut-backs.

Very little can be concluded from a friendly against Wigan, but early signs were promising.

Coming back to Anfield with a point to prove, it’s fair to say that Markovic’s second attempt at proving he can have a Reds future has been underwhelming.

It looked to be heading for more of the same upon his half-time introduction, as the Serbian struggled to get in the game, and when he did, fail to produce anything of note, running up blind alleys and giving the ball away.

But in a moment we have all been waiting for, Markovic came to life with 20 minutes left, opening the game up with an inch-perfect cross for Ings, who controlled and finished brilliantly from close range.

The Serbian was visibly lifted by a much more promising impact, and he looked more confident thereafter, drifting inside to join play with some neat touches and purposeful dribbles setting up some promising attacking situations – one leading to a chance that should have seen a third goal.

It was a half of two halves for Markovic and as he battles for his Anfield future, he needs to produce more of the second half of his 45 minute outing.

Pre-season has the ability to unearth a new gem, and the hugely talented Woodburn is becoming that man.

Enjoying a moment we all dream of by scoring his first goal for Liverpool in the 5-0 success over Fleetwood, the teenager picked up from where he left off, producing another fine display which he capped off with a second strike in as many games.

Playing up with Ings in the second 45 minutes, Woodburn impressed hugely again, particularly with the level of game intelligence he has for such tender years – making a number of clever runs and finding pockets of space to link midfield and attack.

A natural striker, most impressive was unquestionably the composure and confidence of his second Reds goal – latching onto an excellent ball from Ryan Kent before driving forward and finishing inside the near-post before the Wigan stopper had time to compose himself.

It’s hard to believe when watching Woodburn that he is just 16-years-old and recently completed his GCSEs, and his impact and early promise has been extremely impressive – though must be kept in check.