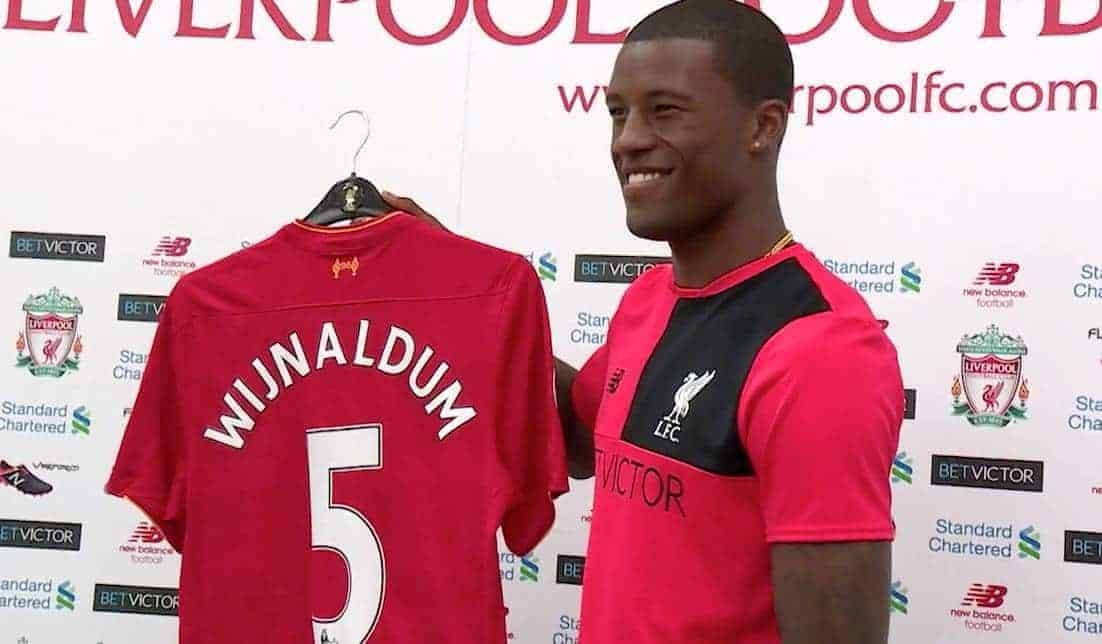 Following his £25 million transfer to Liverpool from Newcastle, it was confirmed that new recruit Georginio Wijnaldum will continue to wear the No.5 shirt.

The 25-year-old Netherlands international completed his move at Melwood on Friday evening, joining the Reds on a five-year contract.

The midfielder will take the No.5 jersey, and says the decision to choose it stems partly from his first appearance as a professional footballer back in 2007.

“On my debut for Feyenoord nine years ago I had No.5, because all the other numbers were already taken,” he told LFCTV.

“It went well, and it has been a lucky number for me. When I came to Liverpool it was also available, which is why I took it.”

The shirt has been worn by some illustrious Reds players down the years.

Daniel Agger was the most recent recipient, before departing for Brondby in 2014, while Milan Baros (bizarrely for a forward), Steve Staunton and Mark Wright are the others to have donned it during the Premier League era. Liverpool legend Ronnie Whelan is perhaps the most famous player to have worn the No.5 shirt, with the Irishman representing the Reds 493 times over a 13-year spell on Merseyside from 1979 to 1992.

Prior to Whelan, winger Ray Kennedy sported number 5 on his back during the golden era of the late 70s, winning five league titles and three European cups.

He scored 11 goals for Newcastle in the Premier League last season, despite the Magpies eventual relegation to the Championship, and found the net against Liverpool at St James’ Park in a 2-0 victory back in December.

Wijnaldum’s arrival further bolsters Klopp’s squad, and competition for places in midfield will only intensify from this point on.

The Dutchman is capable of playing in both defensive and attack-minded roles, and should prove to be an excellent acquisition.

He will now fly out to the United States, where he will meet his new teammates on their pre-season tour.