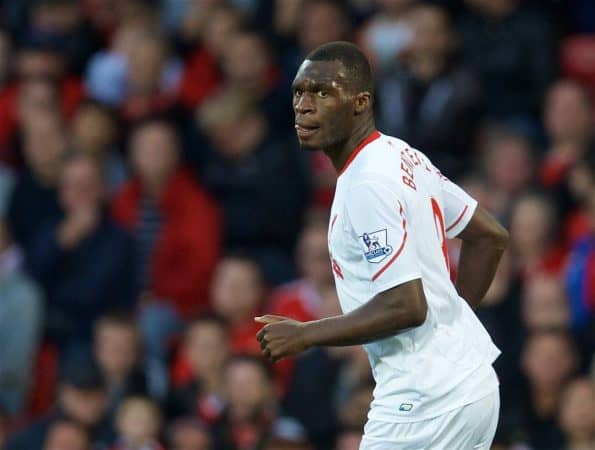 Despite Crystal Palace‘s improved offer for Liverpool striker Christian Benteke, a deal is yet to be agreed.

The south London club were set to make an offer of up to £31.5 million for the out-of-favour Belgian, with an initial fee of £27 million boosted by performance-based add-ons.

This would allow Liverpool to recoup much of the £32.5 million fee they paid to sign Benteke from Aston Villa last summer, while breaking Palace’s transfer record.

But while this offer represents a positive development for the Reds, the Mirror‘s David Anderson claims they are not content with the terms of Palace’s offer.

However, he continues to stress that “Liverpool, Palace and Benteke [are] confident a deal can be struck.”

Furthermore, according to the London Evening Standard, Palace are willing to match Benteke’s current wage, in order to convince him to make the move to Selhurst Park.

Benteke signed a five-year, £120,000-a-week contract with the Reds last summer, but struggled to establish himself under new manager Jurgen Klopp.

Speaking in March, Benteke admitted he “would have never signed for Liverpool if I wasn’t the manager’s first choice,” though he reiterated that it was his “desire to succeed at Liverpool.”

With Daniel Sturridge, Divock Origi, Danny Ings and possibly both Sadio Mane and Roberto Firmino ahead of him in Klopp’s pecking order up front, Benteke will have few opportunities to impress if he remains on Merseyside for 2016/17.

A move to Palace looks increasingly likely, and as Anderson suggests, with all parties keen to seal a deal, minor discrepancies in value should not prove too big an obstacle.

If Liverpool are able to sell Benteke for an up-front fee of £30 million, they will have wiped out their outlay for Mane.

With the £4 million departure of Jerome Sinclair to Watford, and a projected £5 million move to Fenerbahce for Martin Skrtel, the acquisitions of Joel Matip, Loris Karius and Marko Grujic for a combined £9.8 million will also be largely covered for.

This could leave the Reds free to pursue further big-money targets such as Borussia Monchengladbach midfielder Mahmoud Dahoud, as well as improving their bids for Piotr Zielinski and Ben Chilwell.