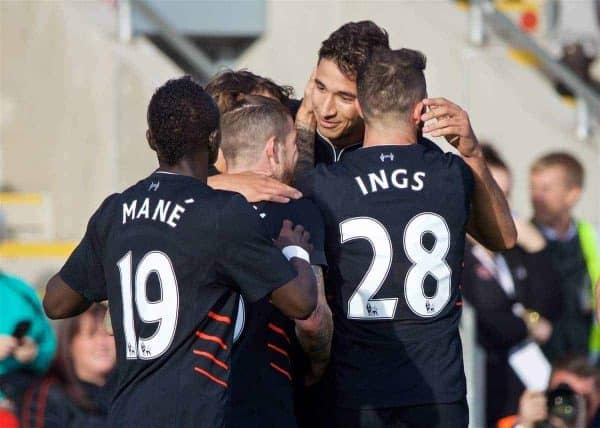 Liverpool strolled to a 5-0 win over Fleetwood Town on Wednesday evening, in the second of nine pre-season friendlies this summer.

Jurgen Klopp‘s side secured their second successive win of the summer, completely dominating their opponents from start to finish.

Liverpool pulled clear after the break, with youngster Ben Woodburn scoring his first-ever goal for the club, with Lucas Leiva‘s strike and a Roberto Firmino double putting the icing on the cake.

It was an impressive all-round performance, albeit against limited opposition, with strong individual displays across the board.

Here are five talking points from the Reds’ emphatic victory.

It feels as though we have been waiting a lifetime to see Marko Grujic for the first time, after he signed from Red Star Belgrade in January.

The 20-year-old was finally awarded his Liverpool debut at Highbury Stadium, having been granted a work permit at the beginning of July, and he did not disappoint.

Grujic produced a very eye-catching 45-minute showing, in a first-half display that will have Reds supporters very excited.

Used in a more attack-minded midfield role than many expected, the Serb displayed a strong physical presence but also quick feet, winning the penalty that Ings failed to convert with a delightful step-over.

Shortly after, he stroked home a calm finish from Alberto Moreno‘s cross to score on his first Liverpool appearance, and there was an all-round presence to his game that really shone through.

It would be wrong to go overboard about Grujic, given it was just a pre-season game against League One opposition, but the early signs are that Klopp has unearthed a gem of a player.

Klopp never had the chance to properly work with his squad on the training ground last season, averaging a match every four days in charge.

It is clear that this summer will be hugely beneficial in that respect, with players starting to know exactly what is expected for them on the pitch.

The centre-back pairing of Joel Matip and captain Dejan Lovren had clearly been told to play quick, direct long balls forward—a tactical favourite of Klopp’s during his Borussia Dortmund days.

It was a good way of catching Fleetwood out before they were fully set up defensively, and it exploited the searing pace of Sadio Mane, in particular.

One of Matip’s long, raking passes played a part in Grujic opening the scoring—it found Mane in space down the left—and it is sure to be a tactic we will see more and more during Klopp’s tenure.

The German has never been fond of possession football for the sake of it, and it is pleasing to see Liverpool steering clear of it—within reason.

Markovic Struggles to Impose Himself

Much has been said about Lazar Markovic‘s future beyond this summer, with opinion split as to whether he should remain a Liverpool player or not.

Having missed a sitter against Tranmere Rovers on Friday, and failing to shine in general, there was pressure on him to impress against Fleetwood.

Despite far from having a bad game, the 22-year-old was a little disappointing on the night.

A couple of hopeful crosses were about all he could muster during his 45 minutes on the pitch, and while his usual pace and directness were evident, there was a lack of substance to his play.

He was shown up by youngsters Woodburn and Ryan Kent in the second half, who were more dangerous and clinical than the former Benfica man.

Markovic needs more playing time before a decision can be made by Klopp, but he needs to start going up a gear if he is to remain at Anfield in 2016/17.

Trent Alexander-Arnold is one of Liverpool’s most highly thought-of youngsters, and at 17, he is expected to have a very bright future in the game.

Having starred in the second half against Tranmere last week, setting up Ings for the game’s only goal, he was handed a start on Wednesday evening.

Having begun on the right of a 4-1-4-1 formation, the teenager swapped with Markovic fairly early on, occupying a more central attacking role in the process.

He looked a real threat there, with his physical stature and ability on the ball both catching the eye, alongside the marauding Grujic.

Every time he had the ball at his feet there was a feeling that something may happen, and there was a confidence about him that belied his tender years.

Klopp loves versatility in his players, and Alexander-Arnold’s ability to thrive in several different positions could work wonders for him.

Liverpool’s manager has never been afraid to throw young players in at the deep end, and while it seems likely that Alexander-Arnold may head out on loan or return to the academy, you wouldn’t rule out him featuring on occasions this season.

If one player has gone under the radar more than anyone in the two pre-season games so far, it’s Jon Flanagan.

The 23-year-old was barely noticed at right-back against Tranmere, and he was equally unspectacular in the trip to Fleetwood.

A lack of attacking threat was slightly alarming, especially when you consider how dominant the Reds were in both, and he left the pitch at half-time having done very little of note—though defensively he was strong, it must be stressed.

It gives a potential excuse for Markovic’s forgettable showing, with Flanagan rarely getting forward to help him down the right flank.

Connor Randall was introduced for the second half, and while the right-back is far from a world-beater, he did far more than his more experienced team-mate.

Supporting Kent, the 20-year-old overlapped a number of times, and even came close to adding his name to the scoresheet on a few occasions.

This season is a huge one for Flanagan, as he looks to prove to Klopp that he is fully fit after severe knee injury problems.

The early evidence is that he doesn’t look a much better option than Randall, although it is tough to judge this early in the summer—we need to see more from him.