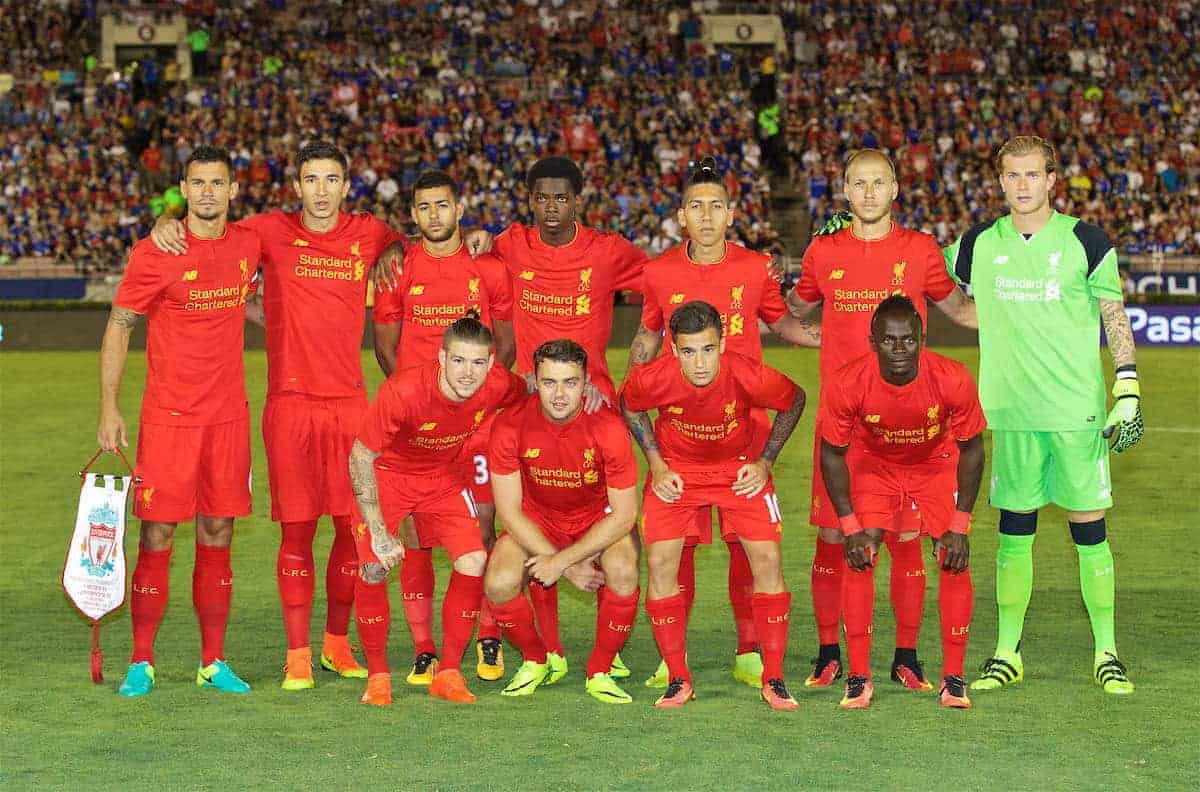 The Reds will look to return to winning ways at the first attempt after suffering their maiden defeat of pre-season against Chelsea in the ICC opener.

The game will be the second of three in six days for Liverpool, who will look to match the step up in fitness they’re enjoying from the warm-up competition with an improved performance level, and a first victory of their US fixtures. Liverpool face their historic opponents for the first time since meeting in the ICC two years ago, and for what is the third friendly between the clubs.

The first non-competitive clash came 14 years ago, when Gerard Houllier’s men beat Milan 2-1 in Madrid thanks to Dario Simic’s own goal and Milan Baros’ strike in the Santiago Bernabeu Trophy pre-season competition.

And the last friendly 24 months ago saw Liverpool run out 2-0 winners at the Bank of America Stadium in Charlotte, North Carolina, courtesy of crisp finishes apiece from Joe Allen and now-Milan man, Suso.

This time the impressive Levi’s Stadium in Santa Clara—home of the NFL’s San Francisco 49ers—hosts the game in which the Reds look to make it three friendly wins from three against the Italians.

The visit to the impressive 68,500 venue will be a first for Liverpool and Klopp’s side will hope to mark the occasion with a win to get back on track. With the season drawing ever closer along with the need to begin blowing off the cobwebs, Klopp could introduce those remaining pre-season absentees back into the fold against the Rossoneri.

Nathaniel Clyne and Daniel Sturridge are likely to feature, while Emre Can and Belgian trio Simon Mignolet, Christian Benteke and Divock Origi are in with a slim chance of receiving their first friendly minutes after staying at the Reds’ training base in Palo Alto in midweek.

Meanwhile, Klopp could hand a Liverpool debut to new signing Georginio Wijnaldum, who was also kept aside for the defeat to Chelsea.

However, the Liverpool boss has a number of injury concerns, most frustratingly with new goalkeeper, Loris Karius, who has a broken hand which requires surgery, potentially ruling him out until October.

Marko Grujic is also out after suffering concussion in a clash of heads with Chelsea’s Bertrand Traore, Lucas is still sidelined with a hamstring injury, and Joel Matip could also miss the game due to his ongoing ankle issue.

However, Ragnar Klavan is fit after thankfully emerging unscathed from Cesc Fabregas’ awful lunge on the Reds debutant on Thursday, and the Estonian is likely to partner Dejan Lovren at centre-back once again, with Matip, Mamadou Sakho and Joe Gomez all unavailable.

Jordan Henderson and James Milner will be hopeful of further game time after enjoying 25-minute cameos last time out, as will Adam Lallana after playing 45 minutes in the defeat to Antonio Conte’s side.

The likes of Alberto Moreno, Philippe Coutinho, Sadio Mane, Lazar Markovic, Roberto Firmino and Danny Ings are all likely to feature in the game.

Youngsters Connor Randall, Trent Alexander-Arnold, Ovie Ejaria, Cameron Brannagan and Sheyi Ojo will all hope to be handed another chance to impress ahead of the season, with the quintet having featured against Chelsea.

Klopp handed an hour of action to the majority of starters against Chelsea, and the Reds boss could do the same for a slightly rotated lineup as everyone tries to improve sharpness and fitness with the season just two weeks away.

A shadow of their former selves, Milan have suffered a turbulent time in recent seasons and play in the ICC at a time a hardcore group of fans protest against owner Silvio Berlusconi’s running of the club.

Milan are at arguably their lowest point on the pitch, having finished 8th, 10th and 7th in Serie A in the last three seasons, prompting their decision to turn to Vincenzo Montella to revive their fortunes.

The 42-year-old aims to become the man to awake the sleeping giant, and has made steps towards that with the signings of River Plate’s Leonel Vangioni and former Pescara goal machine Gianluca Lapadula for £7 million.

Neither new recruit will feature against Klopp’s side however, with both being left at the club’s training base along with last season’s top scorer Carlos Bacca and Italy defender Mattia de Sciglio.

Former Reds Gabriel Paletta and Suso are also involved in Montella’s group, and having both featured against Bayern Munich, the duo could play against their former club.

Sunday’s game will be Milan’s third of pre-season, with the Rossoneri unbeaten in their opening two matches.

Montella’s side beat Bordeaux 2-1 in their first friendly game, before opening the ICC campaign with a win on penalties against Bayern after an eventful 3-3 draw, which saw goals from Niang, Bertolacci and Jan Kucka.

Montella’s men therefore arrive in strong form and in good condition, presenting Klopp’s team with another testing encounter on their pre-season journey.

Liverpool vs. AC Milan will be shown live on LFCTV, and as ever, This is Anfield will provide coverage of the clash, with kickoff at the Rose Bowl set for 3:05am (BST).