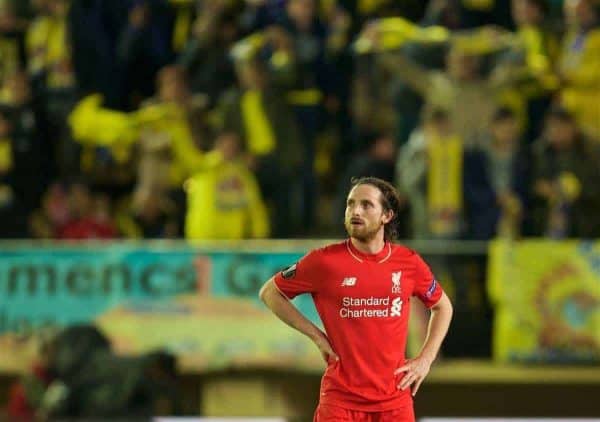 Liverpool midfielders Joe Allen and Luis Alberto are both the subject of interest from Sevilla, the Spanish club have confirmed.

Goal‘s Melissa Reddy relays interest from the La Liga side in Allen and Alberto, with their respective qualities both suiting their style of play.

Allen has already been linked with a move to Liverpool’s Europa League final conquerors in the last couple of weeks, with the 26-year-old’s Reds future still up in the air.

Despite an impressive 2015/16 season, and a even better Euro 2016 campaign with Wales, the diminutive midfielder is yet to be offered a new contract at Anfield.

Talks have cooled between Reds transfer targets Piotr Zielinksi and Mahmoud Dahoud, however, which could mean Allen stays on Merseyside beyond the summer.

But speaking this week Sevilla’s director of football, Monchi, acknowledged the club’s interest in both Allen and Brazilian playmaker Ganso, saying “they are on our list and they comply with the profile that we are searching for.”

Allen is certainly worthy of gracing a team of Sevilla’s calibre, and it has been hugely refreshing to see the former Swansea City man reaching his potential over the last 12 months or so.

Alberto, meanwhile, has barely made an impact at Liverpool since joining for £6.8 million from Sevilla in June 2013.

The 23-year-old has only managed 12 appearances for the Reds—he has spent the last two seasons on loan at Malaga and Deportivo de la Coruna—and he appears to have no future at the club under Jurgen Klopp.

Monchi says that talks over re-signing Alberto have not yet got underway, but the player’s representative has been in touch.

“We received an offer from Luis Alberto’s agent. We’re assessing it, but we haven’t started talks with Liverpool,” he confirmed.

“He fits in our game style and can be an interesting option for us.”

Alberto is clearly talented, and impressed at Deportivo in 2015/16, but the Premier League never felt entirely suited to him.

With plenty of players ahead of him in the pecking order at Anfield, a return to Sevilla would be a good move for the young Spaniard.