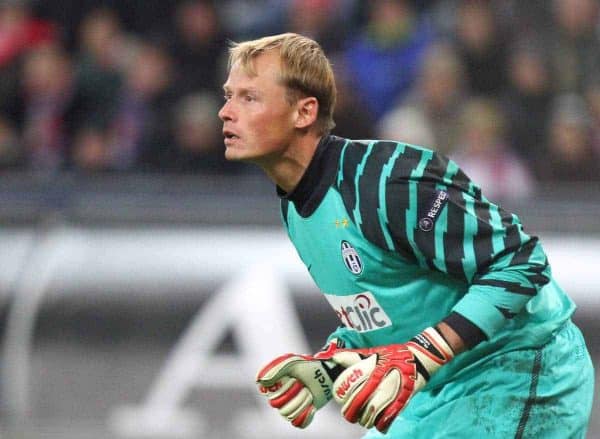 The former Arsenal, Siena and Juventus goalkeeper most recently turned out for Bundesliga side Augsburg, but left this summer on the expiry of his contract.

Manninger has since joined Jurgen Klopp‘s squad to train at Melwood, with the Reds manager considering whether to hand him a contract.

With young goalkeepers Ryan Fulton and Danny Ward leaving the club on loan this summer, and last summer’s free signing Adam Bogdan tipped to leave after dropping down the pecking order, Manninger would join as third choice, behind Loris Karius and Simon Mignolet.

That is according to reporters including the Express‘ Paul Joyce, who revealed that Manninger is looking to prove himself to Klopp.

Arriving with a wealth of experience both in the Premier League and on the European stage, Manninger could serve as a strong mentor to Karius in particular.

Karius signed for the Reds from Mainz in a £4.7 million deal this summer, with the 22-year-old expected to take over from Simon Mignolet as Klopp’s first choice.

At such a young age, Karius would likely benefit from the experience of Manninger, who made just two appearances for Augsburg in 2015/16.

Manninger would likely only sign a one-year deal, to cover for the absences of Fulton and Ward, who are set for bright futures on Merseyside.

Ward has agreed a new five-year contract with the Reds, and will put pen to paper on his return to Liverpool after a three-week break.

Spending the campaign under Klopp’s close friend David Wagner at Huddersfield will aid Ward’s development, and the Wales international can hope to return to a regular role in 2017/18.