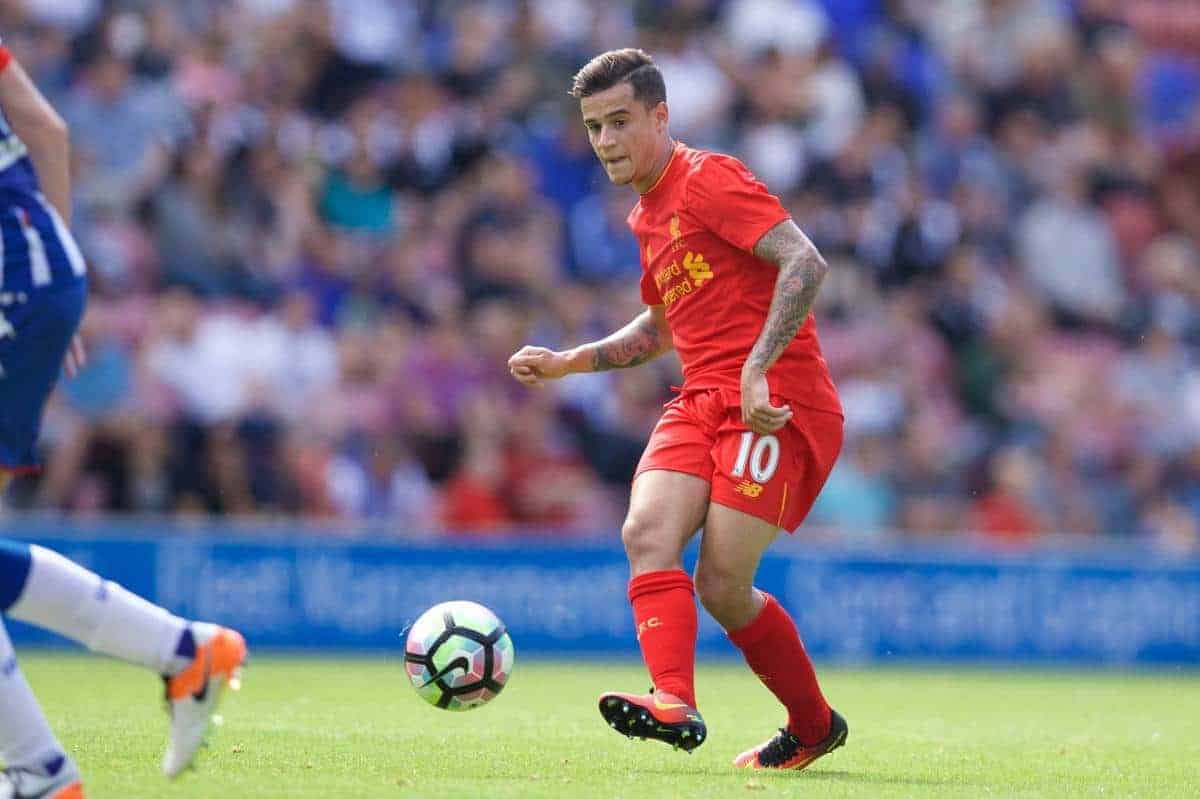 The Brazilian returned to the starting line-up and almost made an impact after just four minutes when his free-kick hit the underside of the crossbar.

He hit the post ten minutes later and produced a wonderful display as Liverpool looked to break the deadlock in the first half but to no avail.

Two second-half goals from Danny Ings and Ben Woodburn helped Liverpool finish off a game they dominated from the off.

The young midfield of Cameron Brannagan and Kevin Stewart looked composed once more and saw lots of the ball in the opening minutes and Roberto Firmino, Coutinho, Sadio Mane and Ovie Ejaria looked exciting in attack.

Liverpool left themselves open in the middle at times though and Wigan almost exploited this when Wildschut made a darting run down the left to earn his side a corner but Mane was back to help out defensively.

As the game settled, Liverpool pushed high up the pitch, leaving Joel Matip and Dejan Lovren to deal with any long balls hoisted towards the Liverpool half. The centre-back pairing didn’t look troubled at any point and Matip had his brightest game so far but limped off right at the end. Mane, searching for his first Liverpool goal, caused problems again as he took on his opponents and used his pace to earn two free-kicks in the opening stages.

Matip had an opportunity to showcase his aerial threat after 20 minutes from a Liverpool free-kick but the tall defender couldn’t quite reach it. He looked comfortable throughout the first half though and was eager to carry the ball forward into midfield on occasions – something Liverpool centre-backs have been hesitant on recently.

Connor Randall, who likes to get forward from the right full-back position, linked up well with Firmino to create a few chances for Liverpool but did so with more success in the second-half when Ben Woodburn joined him on the left.

Firmino was at the heart of the action once again as he linked up well with Mane, Coutinho and Ejaria through the middle but the academy star’s strike was blocked after some great build-up play in the first half an hour.

Karius’ first two involvements were shaky to say the least. The goalkeeper was forced to come to the edge of his box to pick up the ball after a Wigan counter-attack and almost handled it outside the area before later messing up a simple pass-back from Matip which was inches away from the Wigan forward, looking for a tap-in.

The new signing hasn’t had much to do in Liverpool’s opening two games and his nervous involvement in the first half wasn’t encouraging, although he did look more composed following his earlier mistakes.

There were concerns at times down Liverpool’s right wing as Wildschut continued to cause problems for Randall and Stewart but defensive cover from Mane, Matip and Brannagan helped nullify any real threat.

The opening almost came on 40 minutes as Mane and Coutinho both had opportunities to find the back of the net but were stopped by the Wigan Athletic keeper. A final break just before half-time gave Ejaria a glimpse of goal again but his strike safely found the hands of the goalkeeper.

The second half saw eight changes as Randall switched to the left-hand side of the defence and Tiago Ilori joined Matip in the centre. Karius remained on the field too as Ings, Woodburn and Markovic came on. Ings was quick to get involved too as he found himself in space through the centre but his first touch took him slightly wide and his shot didn’t trouble the Wigan keeper.

Youngster Woodburn, who impressed at Fleetwood Town during the week, looked comfortable on the ball again and made some early breaks forward.

Markovic got involved in the game more than he has done so far during the pre-season campaign and he linked up well with Ings to produce another chance after 54 minutes but Ings’ poke beat the keeper and the left post as the game remained goalless.

Alexander-Arnold’s first involvement saw him driving at the Wigan defence, much like we’ve seen him do in previous games but he didn’t get any success in the opening ten minutes of the half.

Wigan had a rare attack on the 60th minute but Liverpool’s defence held tight to prevent them breaking through. A powerful shot came from the outside of the area but it didn’t trouble Karius as the keeper watched the ball fire safely past his right post.

Randall and Woodburn then linked up well at the other end and the 16 year-old’s flick into the box almost gave Ings the perfect opportunity to strike from six yards out but a last-ditch tackle was timed perfectly to prevent the forward from shooting.

Kent searched for his first goal and almost found it when Markovic and Ings created an opening for the youngster after 65 minutes. His shot narrowly missed though but he looked determined to create another opportunity later-on in the half, setting up Markovic, who failed to capitalise on the chance.

It was Ings who provided the goal though after 70 minutes when his darting run behind the defenders gave him an easy finish from six yards out.

After breaking the dead-lock, Liverpool looked dominant as they pushed on for a second and it was only moments later when Woodburn celebrated his second goal of the week after a composed finish in a one-on-one situation with the Wigan goalkeeper.

There were more encouraging signs for Liverpool as Markovic’s performance looked bright and he continued to cause pressure for the Wigan defence and much of his play led to chances for Ings, Kent and Woodburn.

The Serbian played more freely and with confidence as he switched flanks with Woodburn on occasions but was often playing off the shoulder of Ings through the middle. Mane, Coutinho and Firmino were the creativity route in the first half but Ings, Markovic and Woodburn linked-up well in the second half to provide the chances. Wigan had a few chances to score though and on 85 minutes, almost caused a problem for the Liverpool centre-backs who panicked slightly when a ball was fired low into the box. shortly afterwards, they broke on the counter but the attempted through ball hit the back of Randall’s heels as the full-back scurried back towards his goal.

Liverpool turned the attack into a break of their own and Ilori carried the ball forward with Woodburn but when it eventually found Ings on the right-hand side of the box, his shot was saved and the Reds ended the game with just the two goals.

Overall it was another dominant performance from the Reds as Coutinho, Matip and Markovic impressed.

The Reds are next in action against Huddersfield Town on Wednesday night.