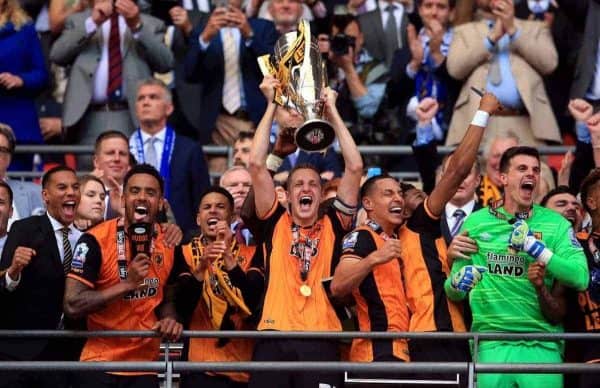 Next up as we preview Liverpool’s opponents for the 2016/17 Premier League season are newly promoted Hull City.

Securing their return to the English top flight by virtue of the Championship play-offs last season, Hull should be preparing for a push for stability in 2016/17.

However, undergoing turmoil off the field, compounded by the departure of Steve Bruce and a failure to sign any first-team players at this stage, leaves caretaker manager Mike Phelan in a troubled position and fans enraged at the ownership.

With a possible takeover on the cards, however, Liverpool could be facing off against a different outfit come September.

We spoke to Hull season-ticket holder Mike Lees to get the Tigers’ view ahead of the new season.

Usually optimism is high for any fan at this time of the year, but I imagine that’s difficult given the current situation at the KC Stadium?

You’re not wrong! Normally at this stage you’d be getting excited about the difference that your new signings might make in the season ahead, but when you’ve not made any and haven’t even got a manager, it’s difficult to find that enthusiasm. Not to mention the infamous owners!

What’s the general feeling among Hull fans? Will there be mass boycotts? Will the stadium be half empty?

I think the stadium will certainly be less full than in previous seasons. The Allam family have alienated a big number of fans by introducing their new membership scheme (replacing season passes) which has no concessionary prices, meaning kids and OAPs pay the same as adults. I’ve heard a good number of people saying that they’ll only follow City away from home so that none of their money goes into the pockets of the owners.

At the minute, it looks like supporters groups are taking other steps to show their disapproval by demonstrating outside the ground or in the city centre, but I don’t think boycotts can be ruled out if the situation doesn’t improve, and quickly. There’s something fishy going on and I’m sure that we’re not getting the whole story. On the face of it, the Allams aren’t acting like they want to sell the club or protect their investment. Something’s badly wrong somewhere!

Which manager would you like to come in and help sort out the current mess? Who would dare take on the job?

The obvious man for the job is Mike Phelan. While he’s got no managerial experience, he worked under Sir Alex Ferguson for over a decade, he knows the squad and would be able to hit the ground running. It would mean we’ve got a figurehead in place straight away and massively improve our chances of making some signings. I don’t think there’d be many top managers who’d want to come in from elsewhere with the situation as it is at the minute.

If/when you do finally sign somebody, what positions need strengthening most?

We need a new goalkeeper. Allan McGregor is out until after Christmas and no matter how impressive Eldin Jakupovic has seemed in one-off games, I’m fairly certain that playing week in, week out, he wouldn’t be up to the job.

In defence, Michael Dawson, Harry Maguire and Alex Bruce are all injured, leaving just Curtis Davies as the only recognised centre-half—one is clearly not enough in any team!

I’d have concerns at right-back too: Moses Odubajo was one of our standout performers last season, but again he’s out with a long-term injury, leaving just Ahmed Elmohamady as cover. While he’s usually quite effective going forward, defensively he makes me nervous and always seems to have an error in him!

Midfield is probably the area where we could get by without making an immediate signings—we have enough senior players to fill the positions!. Losing Mohamed Diame to Newcastle was a big loss, though. Whilst he’d often go missing for big parts of games, he was a potential match-winner.

His moments of brilliance are going to be difficult to replace and could leave us really lacking in creativity in key areas.

Up front, Abel Hernandez is our only proven goalscorer and you’d think he’ll have to have a huge season if we’re going to avoid the drop. The only other senior striker is Adama Diomande who we’ve seen very little from since we signed him last January. You’d have to think we need at least one more to add to those two before starting to rely on academy players.

I think we’d have to play Livermore or Huddlestone as a makeshift centre half. Certainly not ideal to be putting square pegs in round holes though.

A question on Liverpool now. What’s your thoughts on how our season will play out; who impresses you and what are our weaknesses?

I think I’d expect you to improve on last season and be in with a shout of a Champions League spot for most of the season. Sadly, I think there are too many other good teams this year for you to quite make it this year, but can’t see it being too far off with Jurgen Klopp as your manager. I really rate him and think that his personality is a great fit at Anfield.

In terms of players I’ve always been impressed with Adam Lallana. He was outstanding at Southampton and I also thought he stood out at Euro 2016 for England (didn’t get nearly enough credit or game time for my liking). He’s only really shone in bursts for Liverpool, so maybe this year is the year he’ll find those same levels of consistency that he showed at Southampton?

I think your weakness over the last few years has been in goal. Loris Karius sounds like he’s going to be a good singing, so hopefully once he’s fit again he’ll push Simon Mignolet for a starting place—he’s never looked like a man who would fill his defence with confidence to me.

When we play there: February 4

Away fans’ pub: “There are plenty to choose from. Nearer the ground, The Brickmakers and Walton Street Social Club—both opposite the Walton Street car park—welcome away fans. Within 15-20 minutes’ walk is The Avenues on Chanterlands Avenue or there are quite a few bars and pubs on Princes Avenue.”

Mike’s advice for a visiting fan to the KC Stadium:

“There’s plenty to do in Hull. For 2017, we are the ‘UK Capital of Culture’ (I know, a poor man’s European Capital of Culture!), so there is a program of events running throughout the year. Outside of that, other attractions are The Deep (aquarium), the museum quarter and Hull’s very own ‘fish trail’ (tour of the city on foot, following fish found in the pavement).”

Players IN: Will Mannion, from AFC Wimbledon – undisclosed

Who Mike predicts to win the league: Manchester City