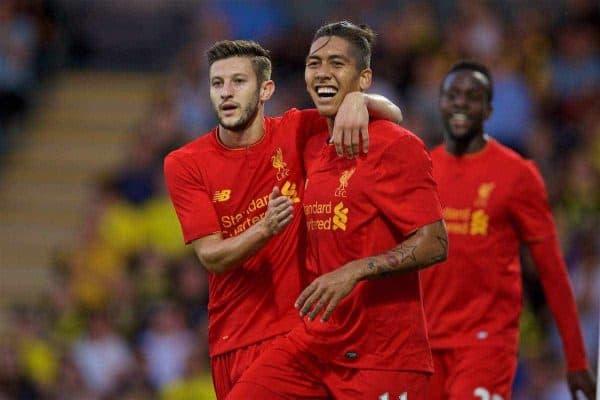 A strong Liverpool side sealed a comfortable 5-0 victory away to Burton Albion in the second round of the League Cup.

Jurgen Klopp named a near full-strength starting lineup for his side’s trip to Staffordshire, with only Philippe Coutinho, Georginio Wijnaldum and Daniel Sturridge left out of those available.

Simon Mignolet started in goal behind Nathaniel Clyne, Dejan Lovren, James Milner and debutant Joel Matip, while Emre Can made his first start of the season in midfield alongside Jordan Henderson and Adam Lallana.

Sadio Mane made his return from injury to start, along with Divock Origi and Roberto Firmino, with Sturridge and Danny Ings on the substitutes’ bench.

This left Liverpool little excuse but to dominate from the start at the Pirelli Stadium, and that was certainly the case in a heavily one-sided clash.

The Brewers started boldly, applying pressure high up the field as the Reds established control in possession, even leading to a penalty call in that was waved away in the third minute.

It was Origi who had the first chance for Liverpool, threaded through by Mane on six minutes, but his left-footed drive was straight at 35-year-old former Derby County goalkeeper Stephen Bywater.

Firmino tested Bywater soon after, with the Brazilian’s close-range header tipped wide, before Matip’s effort was blocked from the corner.

It was Mane who laid on Liverpool’s opener on the quarter-hour mark, driving to the byline and shifting the ball through a packed penalty area for Origi to flick home.

Lallana almost made it 2-0 minutes later, but he was too late to read Henderson’s deft cross, nodding wide from close range.

But Firmino got Liverpool’s second just after, heading Clyne’s excellent cross into the back of the net.

The Reds were forced into some defensive work in the closing stages of the first half, but Matip, Clyne, Can, Lovren and Milner all held firm, with Firmino retreating to contribute, and Klopp’s side headed into the interval with a comfortable two-goal lead.

Klopp kept the same side on for the second half, content with the control the Reds had enjoyed through the opening 45, and this continued as Simon Hooper got things underway again at the Pirelli.

There were slower out the blocks, however, but were hampered by some physical play by the Brewers, with Hamza Choudhury and Lee Williamson booked for cynical fouls before the hour mark.

Williamson’s foul led to Liverpool’s third, with Liverpool’s free-kick resulting in a corner that Tom Naylor diverted into his own net following a header from Can.

Lucas Akins had Burton’s best chance of the night before both managers shuffled their pack, with Klopp bringing on Georginio Wijnaldum and Daniel Sturridge to replace Lallana and Firmino, before he was forced into his third sub as Can was forced off the field through injury.

Kevin Stewart took his place, and the former Burton loanee provided Liverpool with added stability in midfield, as well as making a vital clearance following a dangerous free-kick.

Sturridge got himself on the scoresheet on 78 minutes, following a lovely sweeping move that saw Milner drifting from left to right, combining with Mane before laying on a simple, low cross for the No. 15 to touch home.

He had his second soon after, with Mane driving through the Burton defence on the right to play a crisp pass into Sturridge’s path, with the striker making no mistake in the box.

This proved to be the last goal of the night, as the Reds secured passage to the third round of the League Cup with a very comfortable win.