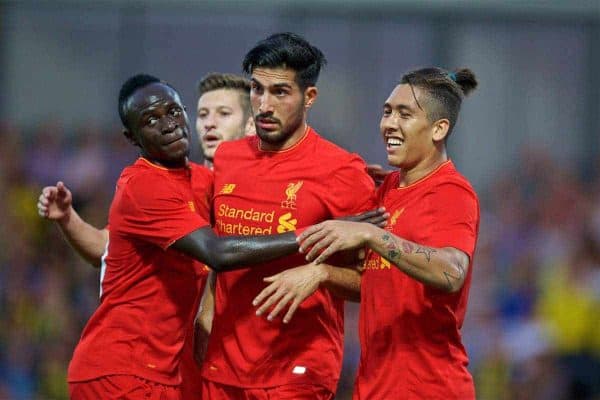 Mignolet’s first real involvement came on 56 minutes, punching well clear from Burton corner, which says it all about the goalkeeper’s night at the Pirelli.

The Brewers rarely tested the Belgian, who was shielded excellently by a well-drilled defensive line.

Though few can doubt Clyne’s defensive prowess, the right-back’s attacking support has improved dramatically in recent months, with England supporters enjoying a glimpse of his talents in the Three Lions’ 0-0 draw with Slovakia at Euro 2016.

Here, he was in a similar mood, balancing his sturdy work in the Reds’ half with powerful, surging runs into the final third, and it was his inch-perfect cross that laid on Roberto Firmino‘s header on 22 minutes.

It was lowly opposition, but if Matip’s debut is anything to go by, the Cameroon international is going to be an exciting player to watch in 2016/17.

Though he had little to do at the back, Matip looked strong defensively, and showcased his ball-playing ability and attacking tendency with several ambitious bursts forward—as something of a box-to-box centre-back.

Like Matip, Lovren was left with little to do in terms of defensive work, but unlike his partner for the night he kept things simple at the back, letting his more progressive colleagues loose.

Produced a penalty scare in the opening stages, but recovered well and looked solid in his role as Liverpool’s left-sided centre-back.

Child’s play for Liverpool’s vice-captain, in a confident display at left-back, responding positively to a poor showing away to Burnley in Saturday’s 2-0 defeat.

Was stable defensively, always willing moving forward and showcased an improved delivery with his weaker left foot, while his involvement in a sweeping move in the second half to eventually lay on Daniel Sturridge‘s opener, was pure majesty.

Making his first start of the season, Can looked close to his dominant self in the holding role in Klopp’s midfield three.

Broke up play with tenacity, and provided a more reliable pivot than Henderson in Liverpool’s two previous outings this season, with Klopp surely hoping his injury isn’t too serious.

The worst performer from Liverpool’s starting lineup, Henderson was relentless in his industry but familiarly lacking in the creative stakes.

Henderson has a worrying tendency to overhit his passes, hampering momentum as the Reds look to push forward and ensuring his team-mates require more touches to gain control, and this must be worked on.

Lacked the incision of his attacking colleagues, but Lallana was certainly more influential than Henderson, with his bursting third-man runs providing welcome support in the final third.

A surprise inclusion after missing Saturday’s loss to Burnley with a shoulder injury, but was given the ideal runout to seal his recovery, and Mane impressed from the start in Burton.

Full of pace, intelligent movement and canny combination play, Mane ran the show from the right flank, and his assist for Sturridge’s second goal of the night was of sublime quality cutting inside from the wing.

Importantly, Firmino’s versatility saw him drift inside towards the penalty area and link up with Origi regularly, overloading the Burton defence, as evidenced by his headed goal in the first half.

Speaking before the game, Klopp insisted that Origi was yet to find his “rhythm” after a busy summer, but it didn’t take long before the Belgian made his mark at the Pirelli, flicking home from Mane’s cutback on 15 minutes.

His physicality and urgency gave Liverpool the ideal outlet up front, and with Burton deployed with a three-man defence, found plenty of space running the channels.

Georginio Wijnaldum (on for Lallana, 64′) – 6.5 – Did little in his 30 minutes on the field, but recycled possession well as Liverpool held on for a clean sheet.

Daniel Sturridge (on for Firmino, 64′) – 8 – Showed his predatory instinct in grabbing two goals, and will be hoping to start in a central role against Tottenham Hotspur on Saturday.

Kevin Stewart (on for Can, 71′) – 6.5 – Made one vital block as Burton threatened from a corner, and added stability at the base of the Reds’ midfield.

Resisted the urge to rotate his side against weaker opposition, showing respect to the tournament and the intent to reach his second League Cup final in as many years.

Bringing Mane back from injury and deploying Firmino on the left flank paid off as Klopp saw his Liverpool side return to the fluid attacking football seen in the second half of their opening-day win over Arsenal in the Premier League, and he will hope for more of the same against Spurs.

However, being forced to withdraw both Can and Origi late on, with the pair struggling after a lengthy workout on their first starts of the season, will lead to further criticism of his approach to fitness.