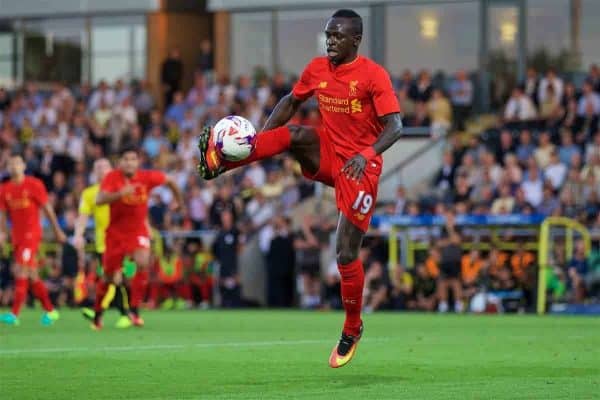 Mane, signed from Southampton this summer for a reported £30 million fee, followed up his impressive goal scoring debut for the Reds in the Premier League victory at Arsenal with another superb performance on his return to the team against Burton in the League Cup.

The Senegal international was sorely missed at the weekend as a shoulder injury ruled him out of the defeat at Burnley, where Klopp’s team were laboured in their build-up and careless and wasteful in possession.

At the Pirelli Stadium, Mane made a difference from the very beginning, laying on early chances for Divock Origi and Adam Lallana before setting up Origi for the opening goal after quarter of an hour.

Mane was also involved in both of Daniel Sturridge‘s late goals as Liverpool eased into the third round with a 5-0 win over their Championship opponents.

Klopp said: “I really like this player, but I don’t like to talk too much after only two games for him.

“We knew of his qualities and how they fit our style, which is why we brought him here.

“It’s not that we have to pat ourselves on the back every day at signing him.”

Meanwhile, Klopp refused to be drawn on reports that Liverpool are open to loan offers for defender Mamadou Sakho.

The 26-year-old France international is short of fitness following a turbulent summer which saw him miss the European Championships after he was accused, and subsequently cleared, by UEFA of failing a drugs test before being sent home from Liverpool’s pre-season tour of America for repeatedly breaking club rules.

Asked if Sakho could be loaned out in order to play matches and build up his fitness, Klopp said: “I am happy that I don’t talk in situations like this about things like this.

“I have nothing more to say about this at the moment.”

Burton boss Nigel Clough, a former Liverpool striker, said in the build up to the game that the size of the task facing his side side was enormous—and so it proved to be.

He said: “You saw the gulf in quality. We are just trying to get used to the Championship for the first time, so to play a team who I think can go close to challenging for the Premier League title, certainly the top four, was too much for us.

“The team they put out could pretty much turn it on at will—the pace, the power, the movement.

“They brought on £50 million worth of subs—that’s just beyond us.

“It was a great learning experience for my side—they got a real close up look at some quality opposition, and they saw what is required at that level.”