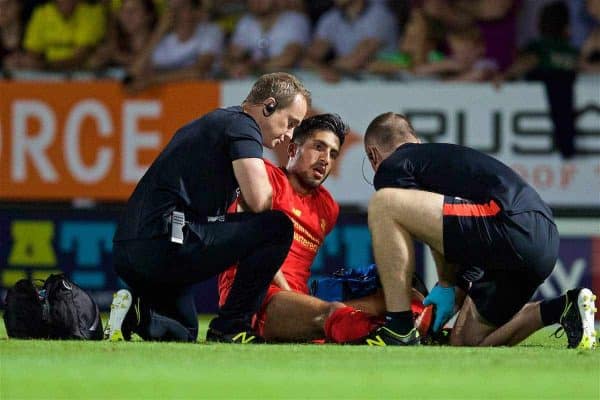 Liverpool could be facing two further injuries after both Emre Can and Divock Origi were forced off during Tuesday night’s 5-0 win over Burton Albion.

The Reds progressed to the third round of the League Cup following their comfortable victory at the Pirelli Stadium, but Jurgen Klopp will be left concerned with the fitness of his squad.

After handing both Can and Origi their first starts of the season, Klopp was forced to withdraw the duo in the second half in Staffordshire.

Can was replaced by Kevin Stewart after what looked to be troubling ankle problem, with his studs catching in the turf as he stretched to make a challenge.

Meanwhile, Origi’s issue looked less serious, but the striker came off in the closing stages after a rigorous workout.

Both were in impressive form against Nigel Clough’s Brewers, and speaking after the game, Klopp said Can’s injury was “the ankle he had problems with at the end of last season.”

“He had a little pain in his ankle without any touch—I couldn’t see any contact,” he told reporters.

“It was a long leg, then a little bit floppy and then he had pain. But it is not that serious.

“It’s not that big [of a] pain anymore, but it’s the ankle he had problems with at the end of last season, so he’s a little bit worried.

“Hopefully it’s nothing too serious,” he added, before confirming that Origi was taken off with cramp.

It is unlikely that either will recover in time for Saturday’s trip to take on Tottenham Hotspur in the Premier League, given the potential severity of Can’s problem and Origi’s lack of match fitness.

But it is the German midfielder who will be the biggest concern, as Liverpool have struggled to find a balance in the middle of the park without him.

Jordan Henderson is most likely to drop into the holding role in Klopp’s three-man midfield, with added onus on the captain to dictate play with more efficiency than against Burnley last weekend.

Goals from Origi, Roberto Firmino and two from Daniel Sturridge, along with an own goal from Lee Naylor, sealed Liverpool victory at the Pirelli.

They will now advance to the third round of the League Cup, as they look to improve on last season’s run to the final.