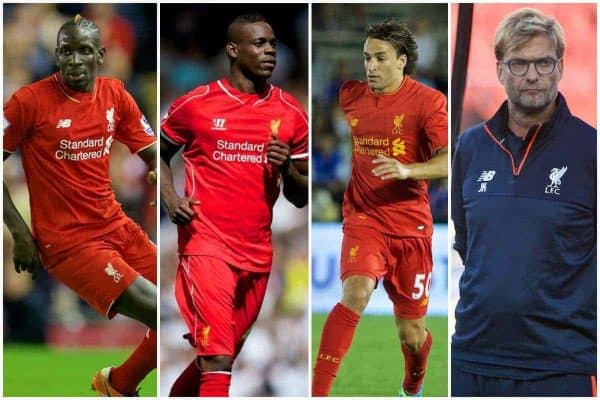 With just one week to go before the end of the summer window, we round up the latest Liverpool transfer news.

Jurgen Klopp has kept himself busy all summer, preparing his side for the 2016/17 campaign both in the transfer market and on the training field.

The majority of his business is now completed, but with seven days until the transfer window closes, there is still time for more incomings and outgoings on Merseyside.

Here we round up the latest Liverpool transfer rumours for Thursday, with Balotelli and Sakho closer to departures.

Sakho has seemingly dropped in Klopp’s estimations this summer, first being sent home early from the Reds’ pre-season tour of the US and then being made available for loan at the start of this week.

The Frenchman has already reportedly been turned down by David Moyes’ Sunderland, as he bids to regain his fitness after four months on the sidelines, but he is unlikely to be short on offers.

The Telegraph, for example, reported on Wednesday night that Stoke City manager Mark Hughes was interested in signing Sakho on loan.

Meanwhile, Turkish Football have claimed that Super Lig side Besiktas have “tabled an offer” for the 26-year-old—though the credibility of their reports are far removed from the Telegraph

Sakho’s focus remains on the training field, however, taking to Instagram on Thursday to tell his followers he was “ready for a hard training session” at Melwood.

Balotelli in Nice for Transfer Talks

After a summer of worryingly fruitless speculation, Balotelli is now edging closer to a move away from Liverpool.

The striker, who joined the Reds two years to the day, was confirmed to be on the radar of Swiss Super League club FC Sion on Wednesday night, with chairman Christian Constantin claiming talks were “progressing.”

Less than 24 hours later, and Ligue 1 side Nice are now said to be in pole position, with Balotelli travelling to France for talks on Thursday afternoon, according to Goal.

It is likely that Balotelli will leave on loan, but Liverpool will surely push for a permanent move for their £16 million gamble.

No deal has been agreed as of yet, but the Reds are looking to get Balotelli off their books before August 31, with Klopp unwilling to welcome him back into his squad.

Balotelli, Markovic, Luis Alberto, Tiago Ilori and Andre Wisdom are five players who Klopp will be looking to shift before the end of the transfer window.

But posed with the possibility of failing to secure deals for any of these players, and namely high-profile failure Markovic, Klopp told reporters on Thursday that they needed to find “perspective.”

“Until August 31 anything is possible. When it’s September 1 we have to analyse the situation then think about what we would do then,” he said.

The 49-year-old later explained that “you need to have players who are convinced they have to start, be angry when they don’t start,” arguing that “we don’t have 60-something games.”

Klopp is still adamant that his squad is too big, with departures for this quintet highly likely.

It seems highly unlikely that Klopp will move for a new left-back before August 31, but that has not stopped the Star from relaying rumoured interest in one.

According to the less-than-reputable publication, Liverpool are among the clubs interested in signing Leeds United’s Charlie Taylor.

West Bromwich Albion and Middlesbrough are also believed to be monitoring Taylor’s progress, with the Englishman having a transfer request rejected already this summer.

Taylor is valued at £7 million, and is a strong, robust left-back also capable of operating further up the field in attack.

Only 22, Taylor fits the profile of left-back Klopp is interested in, but it remains to be seen whether this interest is genuine and, more importantly, whether it results in a move.

Belgium has been a hotbed of young talent in recent years, and with Liverpool looking to flesh out their academy ranks with quality, this could see them raid the Pro League for a winger in the future.

According to Belgian journalist Kristof Terreur, the Reds have been scouting Genk’s 19-year-old prospect Leon Bailey of late.

Paris Saint-Germain and Ajax are both believed to have made bids for the young Jamaican, while Leicester City are also interested.

However, Terreur has revealed that, after consulting his father, Bailey has decided to stay with Genk for the time being.

Don’t rule out a move in the future, however, with Klopp and his backroom staff always on the lookout for outstanding young players operating under the radar.