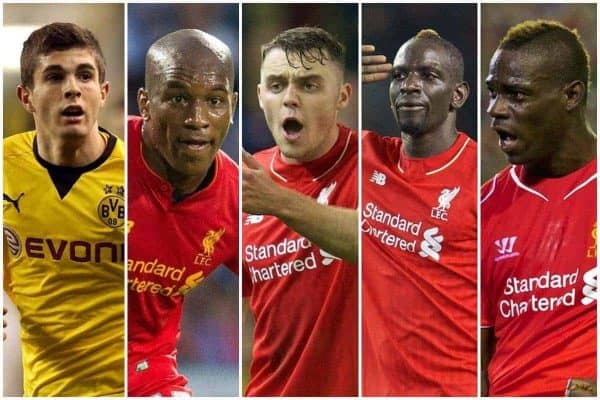 We round up the latest Liverpool transfer rumours, as the summer window nears its conclusion on Wednesday night.

The English transfer window is due to close at 11pm on Wednesday, with Premier League clubs required to finalise their business before this looming deadline.

Jurgen Klopp‘s Reds will be no different, with the German likely working to the wire, despite looking to call upon his final squad early in the summer.

Liverpool will largely see a host of players leave in the final days of the window, with some of Klopp’s peripheral figures still struggling to find a new club for the 2016/17 campaign.

Here we round up the latest in Liverpool transfer rumours, including disappointment in Klopp’s pursuit of Christian Pulisic.

Klopp surprised Merseyside on Friday, when it was revealed that the 49-year-old had sanctioned an £11 million bid for Borussia Dortmund teenager Pulisic.

The 17-year-old, who broke into the Dortmund first team towards the end of 2015/16, is a versatile forward capable of shining on either flank or behind the striker, and would swell Klopp’s attacking options further.

However, Klopp may be forced to wait before he can add the American to his squad, with German publication Kicker reporting that Dortmund had rejected the offer.

Pulisic is now likely to remain in Thomas Tuchel’s squad past deadline day, but Klopp should return with another bid in the future.

With two years left on his current deal, Pulisic’s price tag could diminish as the months go by, as with another of Klopp’s summer targets, Borussia Monchengladbach midfielder Mahmoud Dahoud.

One of the players on Klopp’s list of likely departures in the closing days of the summer window, Andre Wisdom could end his eight-year spell with the Reds by Wednesday.

The 23-year-old is surplus to requirements on Merseyside despite a lack of centre-back options at Klopp’s disposal, with the German favouring Portuguese talent Tiago Ilori for his travelling squad for Saturday’s clash with Tottenham Hotspur.

Wisdom has previously spent loan spells with Derby County, West Bromwich Albion and Norwich City, but should leave on a permanent deal this time around.

According to the Liverpool Echo, this could be with Brendan Rodgers’ Celtic, with the Reds awaiting a “suitable offer” for the former Bradford City youth.

Rodgers has already added one of his ex-Liverpool defenders to his squad at Celtic Park this summer, and Wisdom may well join Kolo Toure in Glasgow soon enough.

Wisdom’s prospects in the Liverpool defence have suffered due to the emergence of a number of talented young full-backs in the Reds’ academy in recent years.

Jon Flanagan‘s rise in 2013/14 was followed by the introduction of Connor Randall last season, with Klopp handing the 20-year-old seven opportunities to impress in his first campaign on Merseyside.

However, without European football this season, Randall’s chances will be limited, and this has seen Preston North End declare their interest in a loan deal.

According to the Mail, Preston manager Simon Grayson is looking to add Randall to his squad, with Klopp “happy” to do business.

Randall is at a crucial stage in his development, and as with a host of other young Liverpool players, would benefit from a season away from Anfield in 2016/17.

A more baffling loan decision is the availability of key centre-back Mamadou Sakho, with Klopp looking to arrange a temporary spell away to allow the Frenchman to restore his reputation.

Sakho is currently lacking in fitness and, after a summer that saw him sent home early from Liverpool’s pre-season tour of the US, potentially too the faith of his manager.

However, Sakho is reluctant to leave Liverpool, and according to the Mirror, has rejected an offer from Stoke City.

The 26-year-old has also turned down the opportunity to joined West Brom on a permanent deal, with his level much higher than Tony Pulis’ Baggies.

Whether Klopp pushes for a last-minute deal for Sakho remains to be seen, but the player’s intention is clear.

The search for a new club for out-of-sorts striker Mario Balotelli has stretched across the whole summer, but now must come to a head with just days to go.

Interest in the 26-year-old has intensified in recent days, and both Ligue 1 outfit OGC Nice and Serie A side Palermo are discussing a possible deal to sign Balotelli before August 31.

Speaking after a 1-1 draw with Lille at the weekend, Nice president Jean-Pierre Rivere told reporters to “tell [Balotelli] we need a striker.”

Meanwhile, ESPN FC have reported that Palermo are “optimistic” over sealing a deal to sign the former Manchester City star.

It is unlikely that Liverpool will benefit financially from Balotelli’s departure, and the Premier League title winner may be required to take a wage cut to force through a move.

Talented young Croatian midfielder Ante Coric emerged as a potential target for the Reds back in July, with Liverpool reported to have made a “concrete proposal.”

This would have seen them pay £12.8 million for Coric, but while this initially seemed just another transfer rumour, the 19-year-old has revealed that he did in fact turn down a move to Merseyside.

“I am happy such big clubs want me, but I want to play with my favourite team in the Champions League,” he said, referencing his decision to stay with Dinamo Zagreb.

“It was up to me to decide, all I needed to do was a medical, but I want to stay at Dinamo, where I can give a lot more.”

Liverpool nearly had the deal over the line, but Coric opted against a transfer this summer, and it may well be that this has prompted Klopp’s interest in Pulisic.