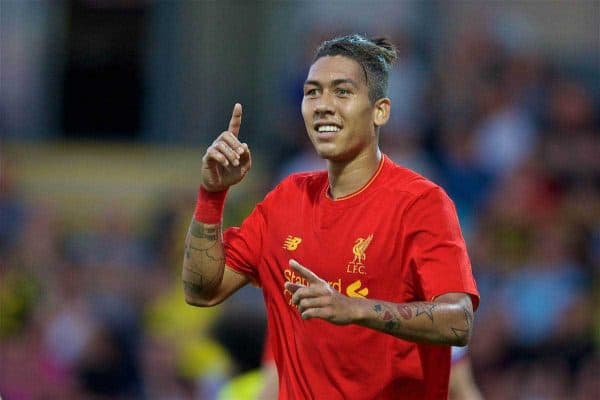 Liverpool made light work of their League Cup second-round clash with Burton Albion on Tuesday night, sealing a 5-0 victory.

The Reds were drawn against Nigel Clough’s Brewers as they looked to build on last season’s League Cup final appearance, with the Championship side representing an interesting test.

Klopp fielded a strong starting lineup, including a debut for Joel Matip, first starts of 2016/17 for Emre Can and Divock Origi and a return for Sadio Mane following a shoulder injury.

It was Mane and Origi who made a near immediate impact at the Pirelli Stadium, with the Belgian flicking home his new team-mate’s cutback following a powerful run towards the byline on 15 minutes.

The Brazilian was in fine spirits, and fine form, despite taking up an unnatural position on the left-hand side of Klopp’s 4-3-3.

Jordan Henderson and Adam Lallana looked to pull the strings on the flanks of Klopp’s three-man midfield, with the latter in particular making his mark with some fine runs into the box.

Mane was the star of the show, however, and will perhaps be disappointed to leave the Pirelli without a goal of his own.

After Lee Naylor sent the ball past Bywater to make it 3-0 just after the hour mark, Klopp brought on Georginio Wijnaldum and Daniel Sturridge, with the latter producing a determined display.

Sturridge scored twice in five minutes, with the second the result of an excellent sweeping move involving Mane and left-back James Milner.

Milner and Clyne were in hugely encouraging form throughout, providing much-needed width with surging runs from deep, and the latter may have been named Man of the Match were it not for Mane.

Injuries to Can and Origi late on dampened the mood slightly, with the German’s ankle problem potentially serious, but the Reds can look towards the third round with optimism after an empathic win.

After watching his side respond to Saturday’s 2-0 loss to Burnley in style, Klopp can hope for a similarly dominant display against Tottenham Hotspur in the Premier League on August 27.