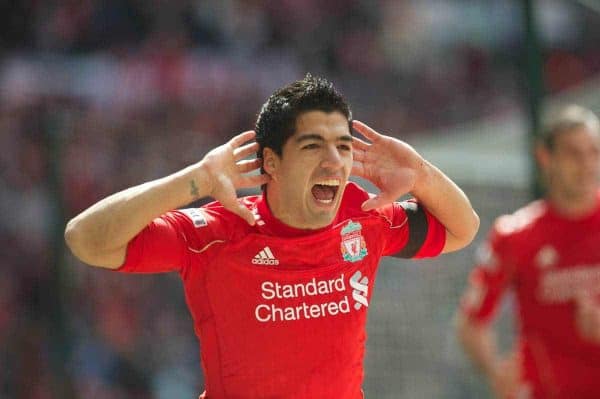 Ranking the 6 players to have represented Liverpool & Barcelona

Liverpool face Barcelona at Wembley Stadium on Saturday evening, in what is the Reds’ penultimate game of pre-season.

The Reds will encounter comfortably their most high-profile match of the summer, as they face arguably Europe’s best club side.

There are genuinely world-class players on show, not least Lionel Messi and Luis Suarez, and it is a great opportunity for Jurgen Klopp to see what his squad is made of.

Over the years, there have been six great talents to have played for both Liverpool and Barcelona. But who has been the best? Here’s how we rank them.

Never the most spectacular footballer, by any means, Boudewijn Zenden was still a very dependable figure for the Reds and Barca.

The Dutchman enjoyed three years at Camp Nou between 1998 and 2001, clinching the La Liga title in his first season and scoring three times for the club.

He then joined Liverpool in 2005, as he approached the autumn of his career, and started the 2007 Champions League final against AC Milan.

A nerveless penalty in the semi-final shootout triumph over Chelsea was a high point.

Zenden never set the world alight, but his versatility, experience and professionalism proved priceless on a number of occasions.

A player who had the ability to cause joy and angst in equal measure, Luis Garcia will forever go down as something of a cult hero at Anfield.

His exploits in 2004/05, in which he scored five goals in the Champions League knockout stages, will never be forgotten.

Garcia could attempt too much on the ball at times, and consistency was far from his strong point, but he had magic in his boots and an eye for the spectacular.

The Spaniard’s three years on Merseyside are more memorable than the 12 months that preceded it at Barcelona, but he still managed eight goals in 38 appearances.

Few Liverpool players have been more popular and consistent over the last 25 years than Pepe Reina, and he was a vital player for the Reds during the mid to late 2000s.

He won the prestigious Premier League Golden Glove award three years in succession—2005/06, 2006/07 and 2007/08—and at his peak, there were very few better goalkeepers in Europe.

A superb shot-stopper, an expert reader of danger and a huge personality in the dressing room, it was impossible not to warm to Reina.

He actually played against Liverpool for Barcelona in the 2001 UEFA Cup semi-final at Anfield, with Gary McAllister scoring a tie-winning penalty against him.

It was one of 49 appearances he made for the Catalan giants, but he never really cemented his place in the team, given his tender years.

When it comes to discussing the most talented players of the last 20 years or so, Jari Litmanen is often a name that goes criminally unnoticed.

The silky forward was an outrageously gifted footballer, in the mould of Dennis Bergkamp, with an ability to play the game with eyes in the back of his head.

In truth, neither Barcelona or Liverpool ever saw the very best of him—Litmanen’s prime years were spent at Ajax—but he still sparkled sporadically.

He moved to Anfield in 2001, after two years at Camp Nou, and managed to play a small role in the Reds’ treble-winning 2000/01 campaign.

Nine goals in 43 appearances was nothing to write home about, but he was plagued by injuries and Michael Owen, Emile Heskey and Robbie Fowler were preferred in attack.

Javier Mascherano is one of the most unsung players of his generation, in many ways, and he remains a real force at the age of 32.

Liverpool snapped him in up 2007, and over the next three-and-a-half years, he matured into one of the best defensive midfielders in world football.

A tenacious tackler with a world-class reading of the game, the former Argentina captain was also excellent on the ball and possessed great leadership.

His magnificent performances for the Reds earned him a big-money move to Barcelona in the summer of 2010, and he has remained a key member of one of the greatest club sides of all time.

Mascherano now excels at centre-back, highlighting his versatility—few Liverpool players have been more sorely missed during the Premier League era.

Luis Suarez may be a divisive character, due to numerous well-documented behavioural issues, but he is a footballing genius.

There is a genuine argument to say that Liverpool have never had a more talented player, and his performances in 2013/14 were beyond compare.

Goals, assists, trickery, work-rate, team work and winning mentality—Suarez had it all during his three-and-half year stay at Anfield, and he has got even better since departing for Barca in 2014.

Eighty-two goals in 133 games for the Reds was a special achievement in itself, but 84 in 96 for the Blaugrana is just ridiculous.

In 2016 so far, there has been no better player on the planet.