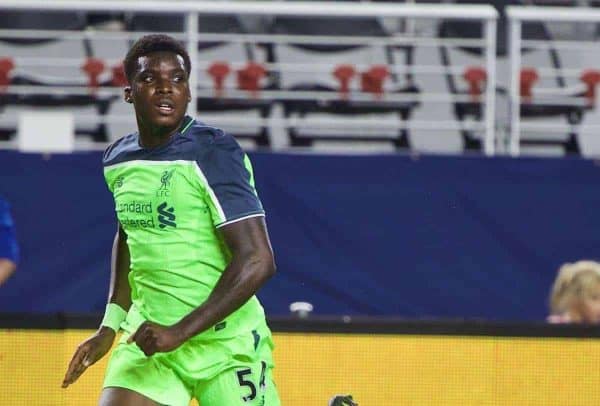 Liverpool winger Sheyi Ojo is looking to follow in the footsteps of his former MK Dons team-mate Dele Alli this season.

Alli made the move from the Dons to Tottenham Hotspur at the start of 2015, before enjoying a sensational first season at White Hart Lane in 2015/16.

The 20-year-old scored 10 goals and laid on nine assists in 33 Premier League games, helping Spurs to a third-placed finish and earning a call-up to the England squad for Euro 2016.

An inspiration to all young English players hoping to break through onto the first-team stage, Alli has emerged as a role model for Ojo.

Speaking to FourFourTwo, Ojo used Alli to highlight his ambitions for the coming season at Liverpool, where he hopes to establish himself as a regular option under Jurgen Klopp.

“Dele’s with the England squad and doing well for Tottenham, and back then [at MK Dons] he had the same swagger he has now,” he explained.

“The step up he’s made to the Premier League and the international stage is an inspiration for all young players.

This has continued throughout pre-season, with the 19-year-old setting up two goals on Liverpool’s tour of the US, following a successful summer with the England U19s in Germany.

Ojo continued to describe the experience this campaign gave him, hoping to use it as a springboard to a breakout 2016/17.

“Last season was a memorable season for me. It went really well and I learned a lot as a player and a person,” he added.

“I’m looking to use that this season. I’m not where I want to be yet.

“There are a lot of things that I need to do and a lot of hard work needs to be put in for me to get there.

“My main aim is to break into the first team on a full-time basis, and keep progressing.”

The former Dons youth star faces a considerable challenge for a starting role this season, particularly following the £30 million signing of Sadio Mane from Southampton, and Klopp is seemingly yet to decide whether to send Ojo out on loan to secure regular first-team football.

But the teenager will be hoping he stays on Merseyside, where he can carve a name for himself.